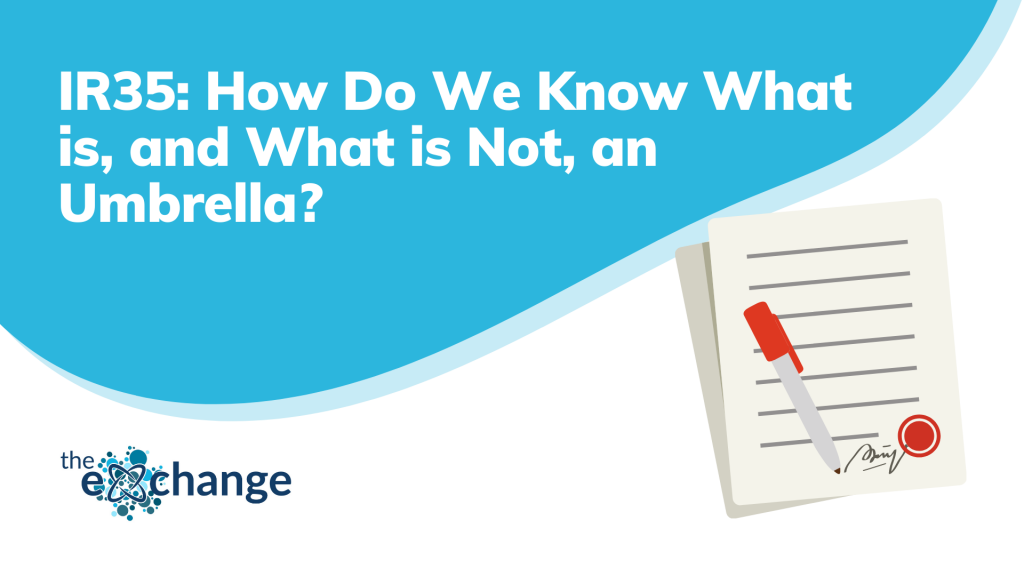 I’ve been increasingly concerned lately about the new ‘umbrella’ products that seem to be popping up with even greater frequency as we start to lead into the IR35 reforms.

A compliant umbrella – i.e. the only ones who should be branding themselves as such – will fully employ a temporary worker and process all of their income under PAYE. There are benefits for contractors, such as it allowing them to move from contract to contract (and agency) without disrupting employment each time. Many umbrellas offer benefits, and the individual has basic statutory rights.

For most contractors, this isn’t the most attractive option, as someone who is genuinely self-employed and earning a good rate will want to engage on an outside IR35 basis, via their own limited company. This allows contractors to structure their income in a tax efficient manner and to generally be in business on their own account – with all the risk and freedom that comes with it.

What does this mean?

With reforms around the corner, some end clients are deciding they don’t want the perceived hassle of IR35 assessments, and are instead making policy decisions to only engage contractors on a PAYE basis, through umbrellas.

This means the contractors in question will suffer a significant drop in net income, lose the freedom of operating their own business, OR have to maintain the limited company whilst being paid on some contracts via an umbrella. Not an attractive choice.

Skipping back in time to when IR35 was first introduced in 1999, we saw the same sort of reaction – many contractors thought they couldn’t, or shouldn’t, continue to work through their limited company. Loan schemes and their use to give contractors certainty over their tax affairs started to be aggressively promoted in response to IR35. (I won’t go into the detail around loan schemes – there’s a good article here if you’re interested – but this year we saw the introduction of the loan charge.)

Contractors who had made use of these schemes had to repay tax HMRC said should have already been paid, but for the use of a loan scheme, going back up to 20 years.

How is this related to IR35?

There is a significant amount of controversy around this, and it has undoubtedly led to a huge amount of distress and anguish for people who were advised by people purporting to be professional advisors, that the scheme was ‘QC-backed’ and ‘HMRC-approved’.

In the past few years, payroll companies generally and umbrellas specifically have improved greatly in offering a professional, compliant solution. Schemes like the FCSA’s accreditation allow contractors and agencies to have a greater sense of assurance that they won’t have a 20 year tax bill in the future. However, the contractors who are being pushed into a PAYE arrangement and struggling to make ends meet are ripe pickings for a new breed of non-compliant ‘umbrella solutions’.

I’ve seen an uptick in the number contacting me – I’m hearing the same assurances about how compliant a particular solution is, even when it’s clear the company is selling tax savings that just can’t be achieved compliantly. When broken down to its basic premise, if an ‘umbrella’ is selling its services based on making a tax saving, that’s not possible with another umbrella – there’s something amiss.

The regulation for Umbrella (such as it is) that was due to come in next year is clearly needed, but so is much more information for contractors. There’s just so many contractors focused on winning contracts, delivering services and wanting to outsource the payroll and admin side of things – it’s easy to get stung.

Equally, end clients need to be confident their supply chain is operating in a genuinely compliant fashion, to protect the contractors and themselves from a significant tax bill in years to come.

The best way to avoid it? Engage on a genuinely outside IR35 basis and get proper assessments, backed by insurance. Evolution has the solution but the clock is ticking, so if you would like more information, please contact me as soon as possible.