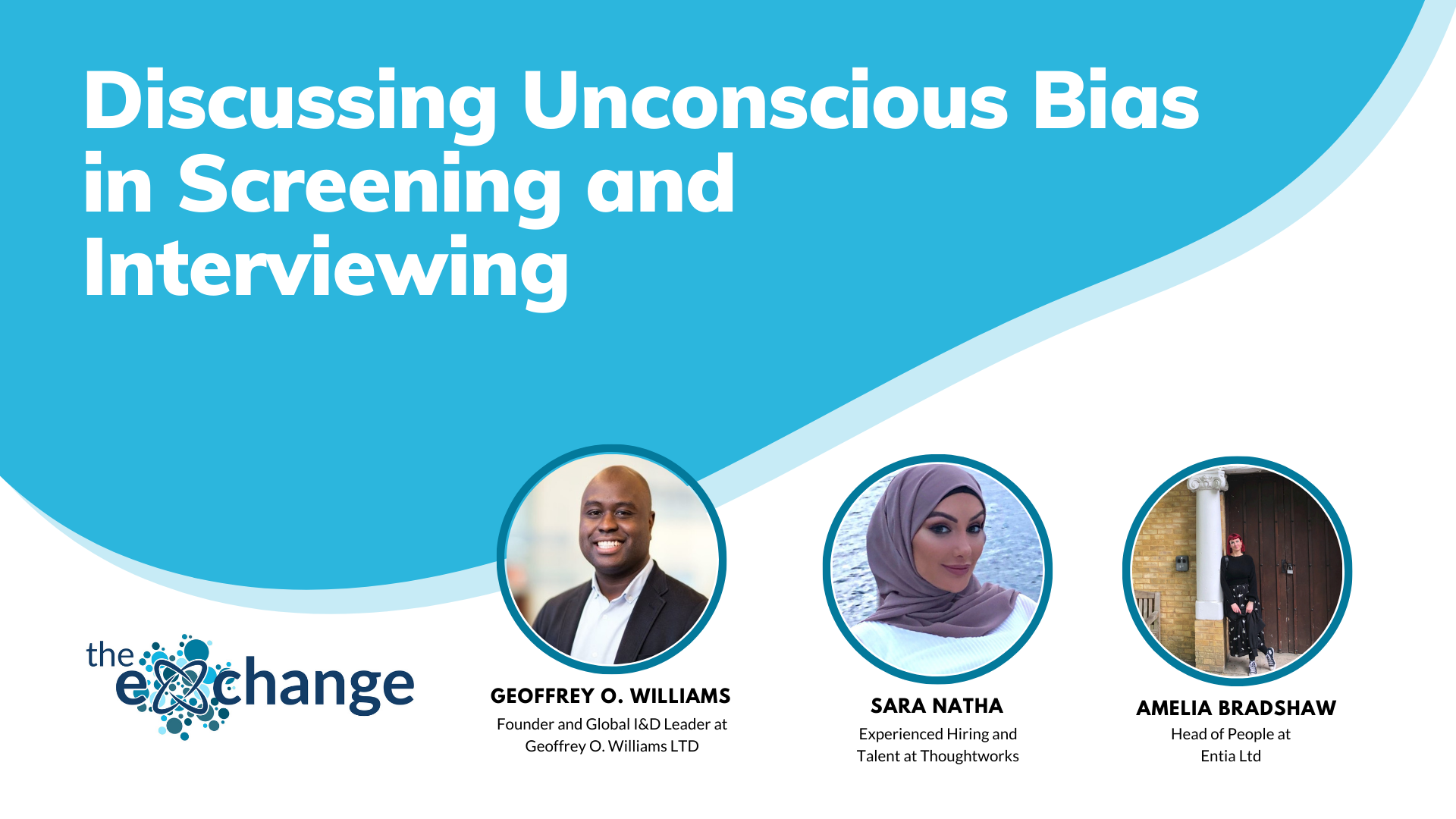 How do you tackle unconscious bias during the screening and interview stage? Join leading D&I thought leaders as they discuss how hiring managers can do more to address the unconscious bias that stands in the way of finding the very best talent.

3:00 – What Exactly is Unconscious Bias?

9:40 – What is Affinity Bias and why is it stopping you from getting the best talent?

10:45 – Can Technology be Bias? The Role of Tech in Tackling Unconscious Bias

30:00 – Advice for taking your first steps into an Inclusive Hiring Strategy

38:41 – Eliminating Gut Feeling from Interviews – Stay Off Social Media During The Process

41:01 – Psychometric and Personality Tests – Do they help or hinder?

44:02 – Looking to tackle unconscious bias in your hiring? Here’s what to do first

What is Unconscious Bias?

Sara explains what unconscious bias is:

It’s an automatic judgment that we make about a person or a situation. There are many different types of bias, I think it’s important to realize that we all have biases. And even those that work in this space, will find that they have bias of their own. And what’s important is that we need to recognize what bias we have, and then work to eliminate it. And I do think that the more that we look within the more we’ll find, and the more that hopefully we’ll want to fix. But one thing I think that that’s notable is to point out that unconscious bias is pervasive. Even those who have been swarmed to remain impartial, like judges, for example, are more likely to send it to people of color and for longer prison terms and white people. So that’s just an example of how bias can come into play even when when we don’t realize it. I would really encourage everyone to try some of the online implicit bias stuff There’s one by Harvard, you will be surprised by your results. But I’ll give a bit of a background about where this actually comes from. So, unconscious bias, it really originates in an area of our brain called the amygdala. It’s what we refer to as our fast brain. It processes things like our emotional reactions like fear. It also helps us to do simple tasks like adding two plus two. And if anyone has ever driven that route to work that they drive every day, and it feels like they blink and suddenly they’re at the car park, and you’ve got no idea how you got there because you weren’t paying any attention. This is your amygdala completing tasks without any effort. So that autopilot effect, and this is really important as it’s, it’s important for us to be able to complete tasks without a lot of effort. Sorry, because our brain has a huge amount of information to process at any one moment in time. And so our brain looks for patterns to create shortcuts to manage this load. It’s a concept called heuristics. And these shortcuts are based on the brain trying to keep you safe. So evolutionary speaking, this was really important. It’s the basis of our fight and flight response. It’s also based on things like what you learned as a child, and some past experiences, even as an adult. But while these shortcuts are really helpful to keep us safe, and help us to make decisions quickly, unfortunately, can also lead us to have some bias, because we can interpret things incorrectly. And we can actually find that our unconscious bias is directly at odds with our conscious beliefs. And so this is where we need to engage the slower thinking parts of our brains. And the good news is that our thought processes are all malleable and we all have the capacity for growth and change. So hopefully that explains a little bit about what unconscious bias is and where it comes from.

Looking to make your candidate experience more inclusive? Download our diversity and inclusion handbook by clicking the image below:

I think technology is going to play an interesting role. Unfortunately, with the design of technology, there is bias in that sometimes designers can influence technology. So, people that haven’t interacted with different types of people, that creates issues. However, there are ways to use technology to then reach out to different communities. And also put that into your screening process. So that could be having blind TVs, having blind interviews and using technology to actually text and speak to candidates without actually seeing them. So you’re kind of hearing an interaction with someone without any visual cues, any sound cues, only from basically what they’re saying. So I think tech is going to lead in that direction. But I think we have to be mindful of having a process that balances technology and human interaction and also other forms of interviewing Because I think if we go down one route, there’s still that space for there to be issues there to be biased.

The danger that you get is that you risk creating too much of a homogenous team. That puts innovation at risk with group thinking and low diversity of thought. And, you know, it’s been proved time and time again that more diverse teams are more profitable and successful. Yeah, why would you want to work with somebody who’s exactly like yourself as well? But um, one of the things that really sort of always gets me is when people talk about failing interviews because you know, they weren’t the right culture fit. As a candidate, you sort of come back and you say, well, what does that mean, can you give me some clarification?

As a business, when you say that you’re looking for somebody who is a culture fit that doesn’t mean somebody who is exactly like everybody else in the business. I think we need to look for people who match our values. Try to figure that out. So if we’re getting everybody who fits into our culture we’re missing out on the diversity of thought.