The Role of a Programme Lead 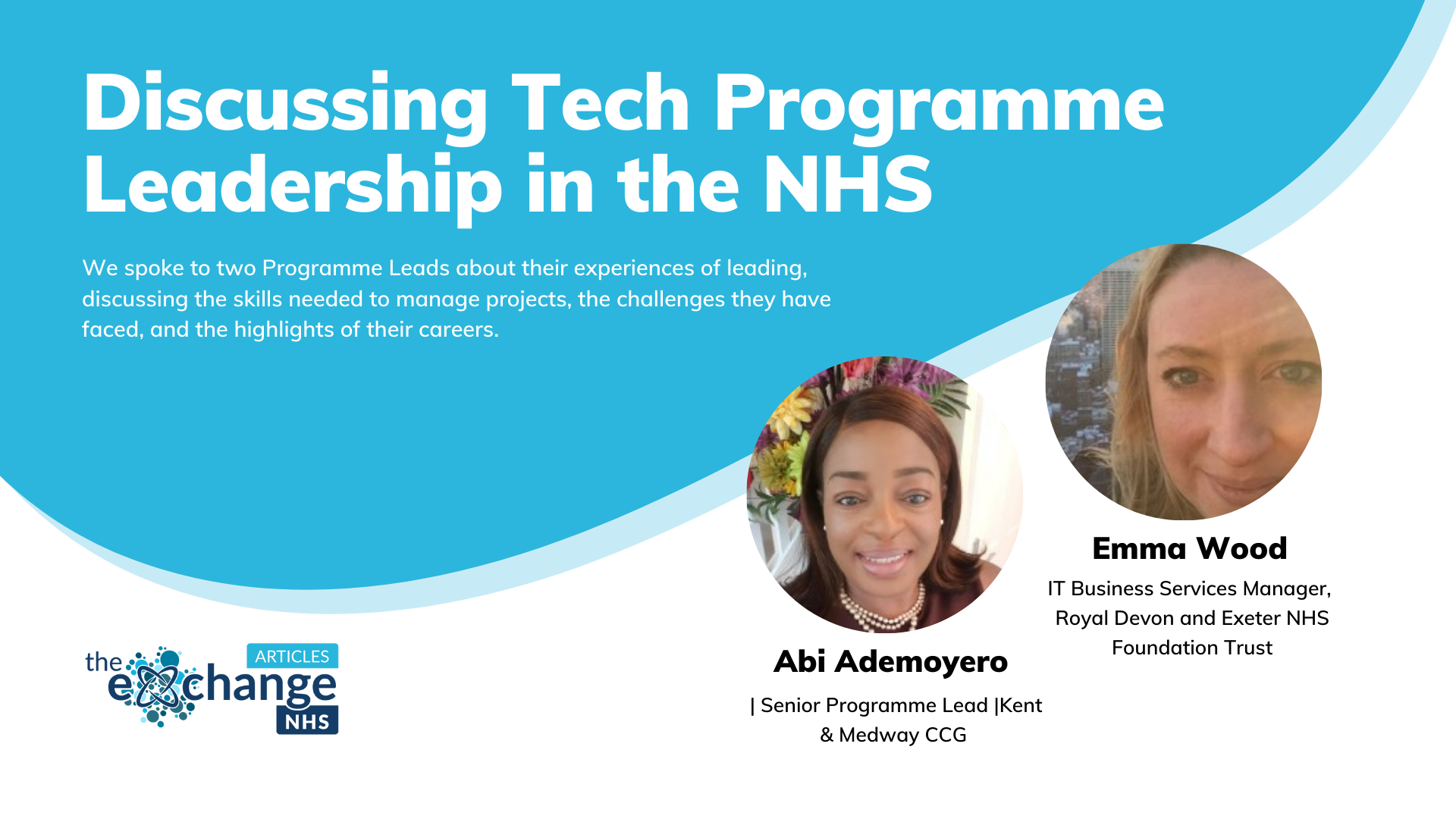 Programme Leads are critical members of staff within the NHS, having the responsibility to drive projects forward and implement innovative technology into trusts and hospitals, increasing efficiency and saving time.

We spoke to two Programme Leads about their experiences of leading, discussing the skills needed to manage projects, the challenges they have faced, and the highlights of their careers.

Abi began her career journey in the healthcare sector and she has worked in the field for almost 20 years. After completing her Master’s degree in Human Resources Management, she began work in clinical change management as a Clinical Governance Manager , which entailed clinical standard performance assurance. She then moved to programme management for a Cancer network, where she undertook improvement projects on endoscopy, colorectal and the general cancer service.

In her current role as Senior Programmes Lead for the UEC Recovery and Transformation programme at Kent & Midway CCG, she is leading a digital programme for Call NHS 111 First, which seek NHS 111 as the a single point of contact to book a patient requiring urgent healthcare intervention into the right pathway. .

Leadership Does Not Exist in a Vacuum

For Abi, there are several skills that are important for effective leadership. These include communication skills, the ability to build key relationships, problem solving and risk management.

“I would like to define leadership as the action of leading a group of people or task, I don’t actually see leadership as a title or position, what is added rather an action and is in doing, and I think for this, there are so many skills that are attributed to being an effective leader.”

“You can’t lead with no followers. If a person wants followers, they have to have the ability to develop collaborative relationships and also be able to influence the followers positively. I think that is key as well, because negative influence will result in persistence to change, whereas a positive influence will definitely result in success, and the aim of whatever the action is to be successfully implemented.”

The ability to work well with people is, of course, key to leading. Communication, listening is very important as well as clarifying and responding, carrying people along and influencing them to buy into the vision are part of the day-to-day role. Alongside this is the relationship with the team and stakeholders.

Continuous Improvement and Development is Vital

Abi strive to take every opportunity to develop herself, both in terms of academic qualifications and informal developments – such as networking – since the start of her career. Understanding responsibilities as a leader and improving oneself based on this is important to continued success in the role.

“You have to get quite good in understanding the dynamics of people, as one of the things that I do, as part of my role is change management and you can’t have an effective change, if you can’t carry people along with you, and demystify resistance to change as well.”

Networking is hugely valuable because of the importance of sharing findings and knowledge across organisations. Abi also follows current affairs avidly to identify any internal or external risks that could affect her line of work.

“Continuous development is very, very important for me. And I take every opportunity to ensure that, I use this as a steppingstone for my development.”

Although education and technical skill is important, Abi cannot overstate the importance of developing your soft skills – particularly for those who are hoping to work in the health and social care sector where, whatever your role, you will be dealing with human lives.

“You need to have those human skills to be able to deal with people, your colleagues, as well as patients, to ensure that you give them the best as much as possible.”

In addition to this, Abi highly recommends finding a mentor who can guide you through your career. This is particularly important for those working in an oganisation as large as the NHS.

“They’ll give you a clear pathway and also access to some knowledge and information, which you might not necessarily be aware of.”

Emma has a long-standing history in project delivery and business analysis. Following university, she undertook a graduate management programme at EDF Energy, and following this moved into contracting for several years where she moved around various different private and public sector organisations. Two years ago, she moved to her current role as Programme Manager at Royal Devon Exeter Trust.

Making Sure There’s a Purpose

Project delivery is fairly standard across most sectors, and involves figuring out what needs to be done and ensuring it is done on time and to budget. However, the success of that implementation can also depend on how much the culture needs to change too. Emma has a strong focus on change management to ensure that the projects she delivers are as successful as they can be.

“Actually implementing new software and making it live to users is almost the easy part. Secondary, to actually doing the change management, culture change , and ensuring it delivers the change it should be. It’s managing that and implementing it in a real sense, rather than just the physical software delivery that is often the challenge.”

These change management skills have been of great use to Emma during her recent project implementing voice recognition software at the Royal Devon & Exeter Foundation Trust. Previously, clinicians had been taking voice notes onto analogue tapes which secretaries would then type up. The introduction of voice recognition software would save significant amounts of time by automatically creating the text as the clinician talks. However, culture change was necessary for both the clinicians and the secretarial team to adopt the new ways of working, and resistance was led by a fear of change. Emma knew that the project was extremely worthwhile, and communicating the benefits and allaying fears was an enormous part of her role.

“It was all around communication, getting out there and being very visible and approachable. Trying to make sure that everybody felt that they had a voice in the delivery, and looking to them to help deliver the project and deliver the message.”

One of the things that Emma has had to continuously do throughout her role is to understand the fears that are causing resistance to change. With the technology that Emma is implementing, the main fear is that their roles will be made redundant, and it is this fear that Emma has spent much of her time soothing.

“The human, the person is incredibly important, they’re never going to be not needed. But the focus of the work, the repetitive part of the job, can be made more efficient, so that you’re doing more interesting things in your job. More purposeful things.”

One of the methods of communicating the was to utilise those who had been set against the project, or were particularly fearful and negative. They are often the most important people when trying to manage change in a difficult environment.

“They’re always the ones that I find are actually the most valuable because if we can convert those that were dead against it into liking it. they can then go out and speak to their peers. A message from a team member who says ‘actually, I thought it was going to be a disaster but it’s brilliant, give it a go’ is always going to be far more effective than any messages given by a distant project team

For any programme lead, it is important to be able to visualise the key benefit at the end of the process in order to successfully lead the project. Within the NHS, this is even more satisfying because the end result of those projects has a positive impact on people’s lives. For patients, the impact of the voice recognition software was clear – the reduced time for clinical documentation to be sent out, often meaning quicker GP follow-ups and improved the patient experience. However, there were also many positives for the clinicians and secretaries.

“From their stress level point of view, the workflow has improved, greatly where clinical documentation is concerned. Less time is spent on typing letters, secretaries have time to do more valuable tasks for their clinicians and Patients have access to their information quicker.”