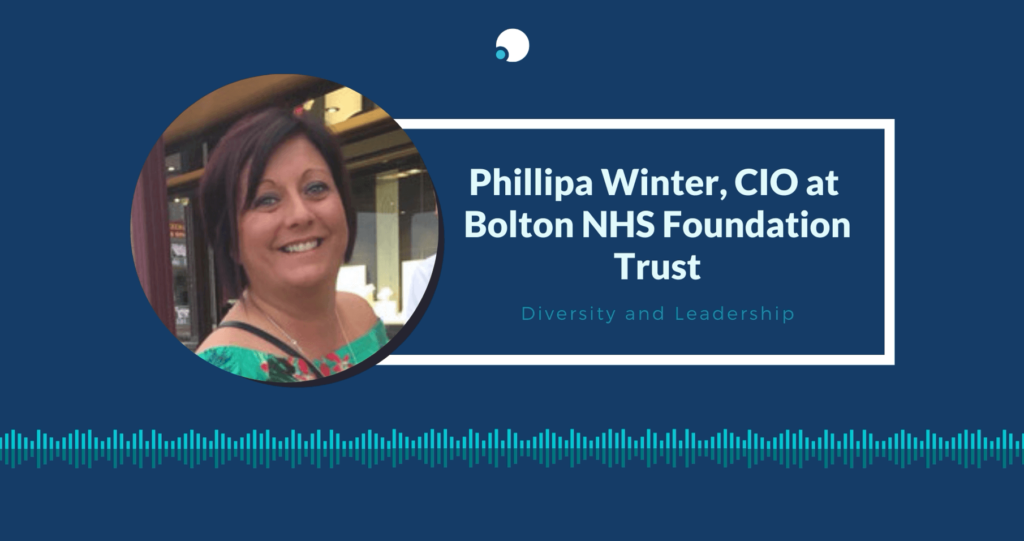 We spoke to Phillipa Winter, CIO at Bolton Foundation Trust to discuss the importance of mentorship, handling high-pressure situations and tech for good.

Phillipa’s story is part of a series of articles highlighting the careers of female tech leaders within the NHS. We’ve brought together these stories in an effort to prove that the route to leadership is never a straight line.

“I Was A Disrupter”

Careers are funny things. Some of them are made from trial and error, others are made from a lifelong dream and determination to achieve that dream. For Phillipa Winter, now CIO at Bolton Foundation Trust, the journey into healthcare leadership started with the witnessing of lifesaving treatment provided to her Brother when she was just 11 years old.

“From that moment I knew I wanted to be in healthcare.”

Phillipa would fall short of the University entry criteria and start an intense retail management course with a large grocery retailer. This move would prove to be the making of a well-rounded leader.

“That year taught me a lot and, I believe, gave me the grounding I need in this role today.”

After completing her retail management course, Phillipa would start her degree in OT. During her education she discovered the importance of an ‘holistic’ approach to healthcare. This interest was realised as Phillipa, now leaving University, took a position as an Occupational Therapist in 1994 before making it as a Therapy Manager in 2012. It was here that Phillipa began implementing digital transformation by leveraging her previous experience as a retail manager to develop electronic processes for patient management and outcomes.

“I was quite disruptive, actually, with the tech people around me saying: ‘this is what we need.’”

After this early disruption, Phillipa moved into the role of Chief Clinical Informatics Officer. At the same time, Phillipa took a secondment at Bolton, where she worked as a programme manager within the elective care division, focusing on a number of transformation projects including theatre utilisation and bed base reduction while doing her programme management qualifications – which laid the foundation for her move into the CIO role in 2015 where she would affect change at scale.

“So as a therapist, I always wanted to care for people and I usually did that on a one to one basis. But now, in informatics, we can really help patients at scale. I love it, because it’s a massive challenge. And it encompasses all parts of my career development from being a 19-year-old, to now.”

“It’s About Empowering Others”

For Phillipa, who has worked with people for her entire career, mentorship, coaching and empowerment go hand-in-hand and form the centerpiece of her leadership style. Tracing her love for empowerment back to her time as an Occupational Therapist, Phillipa works on getting the most out of her team of diverse professionals. Informing her empathetic leadership is a strong cast of mentors and coaches.

“So I do have a formal coach. And that’s really more as a CIO. And that’s more about my personal development and progression, he helps me challenge some of my Gremlins. I think it’s important to have a safe place to talk about those things.”

A fundamental part of development, mentorship and coaching is traditionally quite a rigid process in the private sector with a single mentor being assigned. For Phillipa, diversifying mentors helps her overcome the equally diverse challenges she faces as CIO.

A good mentorship should provide value to both mentor and mentee. For Phillipa, who regularly mentors the people on her team, the value lies in the relationships she builds.

Being resilient, in theory, seems sound – but applying it is another story altogether. Elements of doubt begin to creep in as you climb the career ladder. This doubt is commonly known as Imposter Syndrome and it’s something that adversely affects women.

According to a report by Access Commercial Finance, a survey of over 3000 adults in the UK shows over two-thirds of women (66%) have suffered from imposter syndrome compared to over half of men (56%) within the last 12 months.

For Phillipa, who recognises doubt as part of human nature, believes it’s less a question of overcoming imposter syndrome and more a question of handling it.

“What you’ve got to do is not let it take over. Find ways to identify what’s real within those feelings and challenge yourself with positive affirmations. But it all comes back to coaching and building a positive working culture.”

When decisions you make at the highest level impact patients on every level, pressure is part of the job at the NHS. For Phillipa, who is coming up on her twenty-seventh year in the NHS, it’s about looking to the people around you.

“It’s about preparing and planning, but mostly about believing in others because you’ve a really great team who when they know what the expectation is of them. All you need to do is trust them.”

There’s Nothing More Rewarding Than Seeing Somebody Thrive

For those looking towards their future, Phillipa has one piece of advice: reach out to people and look for those mentors.

“If I look at my career, I quite often focus on what’s in front of me. I stop and reflect by asking myself: What could we and I do differently? And what impact can we make with technology and innovation? Your peer groups, networks and utilising many different people around you can help you really reflect and go to the next level. Don’t stop at one person or role model, learn and get the best bits from them all”

Too often we focus on the next step with no second thought to the ones we took to get us there – it’s there we usually find the lessons we can pass on to the next generation.

“This is about nurturing people and giving people opportunities, and there’s nothing more rewarding to see somebody develop and thrive.”