In Conversation With: Sonia Hayre, Business Intelligence Manager at Coventry and Rugby CCG 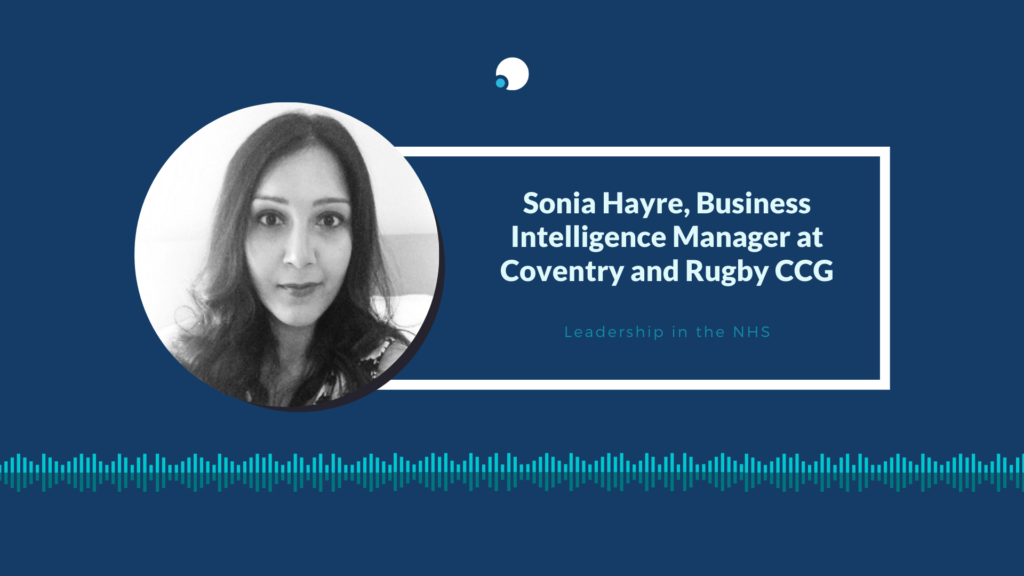 Sonia’s story is part of a series of articles highlighting the careers of female tech leaders within the NHS. We’ve brought together these stories in an effort to prove that the route to leadership is never a straight line.

Graduating in 2004 with a computer science and business admin degree, Sonia started her career with a contract at Jaguar Landrover at an on-site GP surgery that had databases on Microsoft Access.

“My role was to try and automate as many of our processes as possible. It was my first major project and it was very successful. I learnt a lot.”

From there, Sonia moved into the private sector where she would focus on CISCO networks for emergency services. A male-dominated environment, Sonia quickly moved on to her next opportunity within the NHS.

“My first role was in a provider acute trust, which helped me gain a lot of experience and knowledge around processes and systems within the trust.”

After a successful start to her NHS career, Sonia moved into commissioning where she spent a year in London working as a contractor. Around this time, Sonia decided to get married and move back to the Midlands. After having a child and being a full-time Mum for a year, Sonia returned to work on a contract role in an Acute Provider in the Midlands.

This role was her first taste of management in business intelligence, but it coincided with the raising of her child.

“It was very challenging. Daunting. There were questions in my mind about where I wanted to take my career and how much I can do with my commitment to my child.”

Returning From Maternity: “I Felt Lost”

Transitioning back to work after parental leave is hard. You’ve been out of the flow of the office for weeks or months, and you’re returning as a different person with new priorities and concerns. (Not to mention the stress and strain of endless new logistics.) It’s jarring and often overwhelming.

For Sonia, who decided to come back full-time, the process of returning to work after maternity leave was challenging – and coincided with other major family developments.

“I felt lost, emotional, overwhelmed. Within six months, my Husband decided to set up an online pharmacy business which put tonnes of pressure on me because I had to dedicate all of my time outside of work to being a Mum because my Husband was working so much.”

A sentiment echoed by many of the working Mum’s we’ve talked to through this series: Maternity leave, as good as it is to have time to spend with your child, can also be an isolating period.

“I could feel myself losing a lot of my day to day skills – social, communication and delegation. So when I came back into my leadership role, I found it quite difficult to separate tough situations at work from things at home.”

Every ladies’ journey through this period will be different, but the levels of perseverance and strength shown to come through it will always be the same.

Now 7 years into her leadership position at the NHS, Sonia is going from strength to strength. Tempered by the challenges of her past, she’s setting her sights on new and exciting projects in the digital transformation space.

“I think I’ve had the best possible journey up until now in the NHS with a combination of acute commissioning and working in different regions. So it’s been good, but challenging at the same time.”

You’ve Got to Embed Change

It’s a common conception that the private sector is a lot pacier than the public sector. For Sonia, who has worked both sectors, this conception isn’t stretching the truth.

“Projects are turned around so quickly and you get instant data and feedback in the private sector. That experience has helped me in the NHS, where things are a bit slower.”

The NHS, a monolithic organisation, is often accused of being resistant to change. With Sonia’s experience in delivering systems technology change at pace in the private sector, she was able to pull together projects quickly – but embedding them was another problem altogether.

“It’s not just systems technology, it’s behaviour. A lot of people are used to doing things a certain way.”

With her previous experiences in the change initiatives within the private sector, where change seemed to be understood as a necessary factor in the development, Sonia had to take a bit of a step back.

“You’ve got to embed the change. Work with people, train and teach. It’s a big change from the private sector, but I do feel my previous experience has helped.”

COVID-19, for all the damage it has caused, has allowed many organisations to get the wheels turning on digital transformation. The NHS is one of the most obvious examples of this.

The number of exciting developments happening right now within the NHS is astronomical. Video consultations and video calling for isolated patients are just two of the more popular examples of how technology is being deployed to transform the NHS.

The reduced levels of bureaucracy has, for the most part, enabled this big surge of digital transformation within the NHS. For Sonia, the way the pandemic has changed the way people strategise within the NHS has been nothing short of amazing.

“Now is the time to be in NHS tech, things are just growing and picking up momentum. Now I feel we’ve levelled the playing field with the private sector.”

Now leading the business intelligence function at her trust, Sonia is setting her sights to the future – a future where the rate of digital change in the NHS is moving ever faster. For those who are eyeing a leadership role within the NHS, Sonia has this advice:

“Take your opportunities. Don’t question, take them and speak up. You need to challenge things to be a good leader. Challenge the ways of working, coach and mentor.”