How to Become a CTO – Advice From Those Who Made It 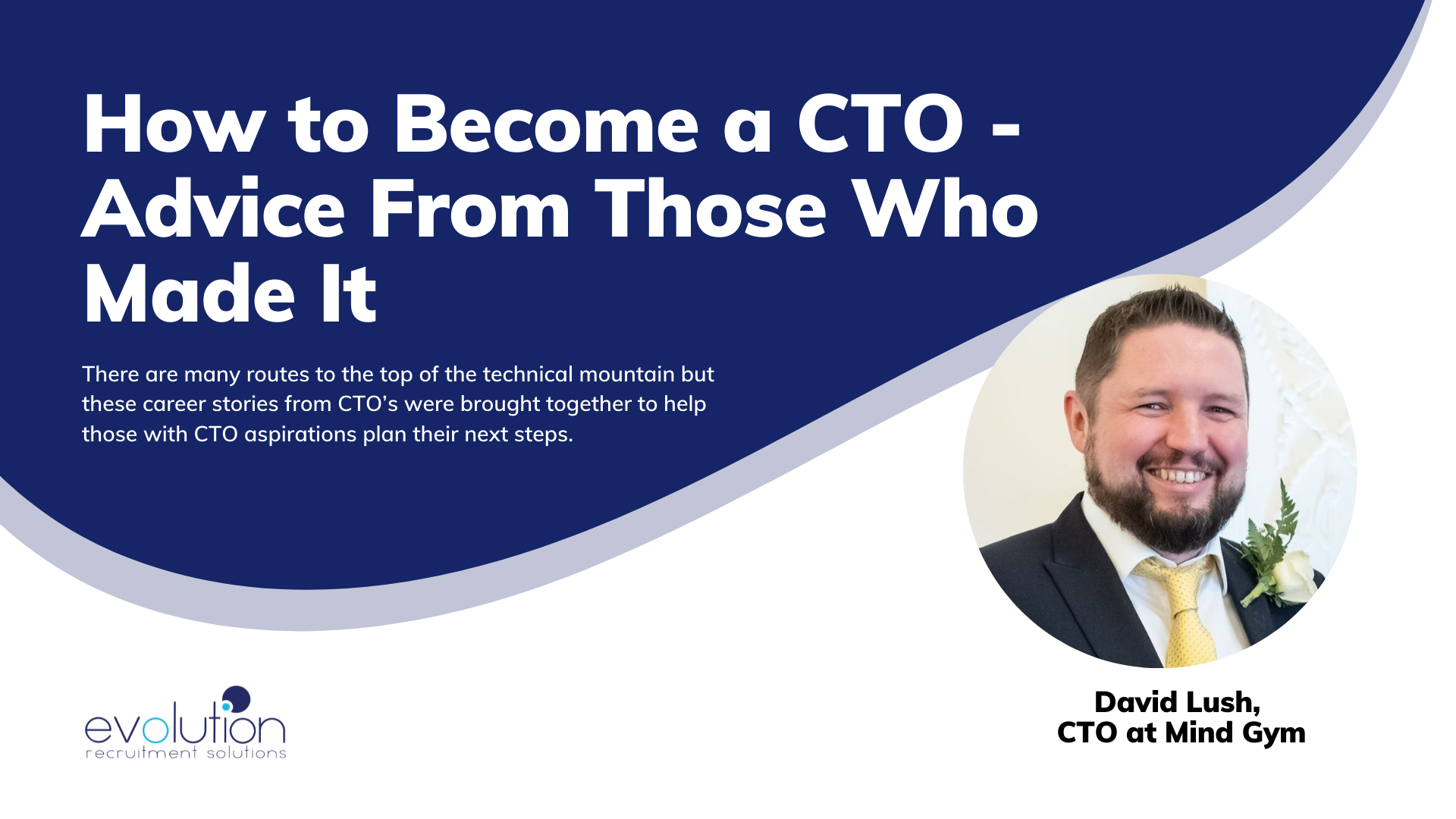 How to Become a CTO – Advice From Those Who Made It

The route to Chief Technology Officer is a winding, twisting path that many who take technical positions will set their sights on. And although some have claimed that there is an almost ‘standard’ path to CTO, our experience speaking to technical leaders suggests otherwise.

There are many routes to the top of the technical mountain but these career stories from CTO’s were brought together to help those with CTO aspirations plan their next steps.

So how do you become a CTO? Listen to those who are already there.

David Lush is the CTO at Mind Gym, a business consultancy that uses the latest psychology and behavioural science to transform how people think, feel and behave and so improve the performance of companies and the lives of people who work in them.

With a technical career spanning 16 years, David started as a graduate java engineer at PowerTec Systems, a small healthcare business that built staff rostering software for clients including the NHS.

“It was quite an old fashioned tech business with the tech director basically hiring me and another graduate to ‘make this work on the web.”

Without much guidance, David and his software engineering colleague needed to do everything themselves – from putting in place source control to building tracking systems, architecture and full-stack development.

“It was a real baptism of fire but it taught us a very wide spread of skills – the only gap was a lack of technical mentorship.”

After 4 years at PowerTec Systems, David moved on to Visa as a Software Engineer. At Visa David moved into a Lead Software Developer role after 3 years, where he managed a team of 7, championed agile delivery improvements and played a fundamental part in delivering the Visa’s early mobile payments services.

By 2014 he moved into a Head of Digital Development role at Visa, in which he was responsible for a team of 80 software engineers, test engineers, scrum masters and business analysts. This role put a strong emphasis on team management and strategic leadership.

“Crucially, my sphere of influence grew during this time along with my ability to ripple larger and larger changes across the business. I was eventually able to get a real cultural influence across the wider organisation.”

In 2017 David made the move to ONZO, a VC funded start-up that focuses on smart meter data analytics. His first priority was building the team, which was initially a very small engineering team of 2 permanent engineers and a small group of contractors. He quickly built this to 17 permanent engineers while putting in place strong continuous delivery practices that ensured they were shipping to production multiple times per day.

“Here I was able to check my imposter syndrome and confirm the successes I’ve had previously. This was in terms of hiring talent, building team culture and building platforms.”

In his most recent role, at Mind Gym, it was a new engineering team and technical infrastructure. An environment that proved to be a hook for David who was going off the back of successes in his time at ONZO.

“My path into the CTO role has been through the creation of great software engineering teams. Building generative (blameless, highly cooperative, high communication teams) team cultures and still loving the tech.”

Martin left his position as CTO at Fujitsu in February this year with the intention to go travelling with locations like Egypt, Chernobyl, Skiing and more on his list.

“But then, the world changed.”

With a career that spans from the burst of the .com bubble all the way to the turn of 2020, Martin has bags of experience in a time that has seen such rapid change.

“I started at ground level, taking a three-month contract with Siemens. I was a network designer working on some really interesting networks for the MoD and central government. After a while the team migrated towards managed services, we then migrated more towards outsourcing and then at about the turn of the millennium, we transferred to form Fujitsu-Siemens Computers.”

At the turn of the millennium,  technology was in a really interesting place. In the year 2000, which for many was the future, development and infrastructure in general was exploding. Being at the heart of it, like Martin was at the time, was incredibly exciting. It wasn’t long before Martin was running a team of solution architects at Fujitsu-Siemens and it was here he really started to enjoy the more human and commercial side of his technical career.

“For a tech person I really enjoy talking to customers. In fact, I’m at my happiest when I’m speaking to customers and stakeholders about something I’m passionate about. I was able to stand out in that regard.”

Developing more team leadership and stakeholder management experience, Martin grew that team at Fujitsu to 20 architects. It was then he was appointed to the role of CTO for the product division. Here he inherited a team full of silos, something he was keen to change.

“We had a team who designed server solutions and another team which designed storage solutions. How many organisations will want to buy just a server or just a storage platform? So it was important I remove the silos.”

During that time, Martin was working with a range of clients in the FinTech and MedTech scene. With these clients he was looking at mobile and software development, working with agile software teams to develop apps for healthcare requirements. This was followed by a big team transformation project that happened with the UK division of Fujitsu.

I decided that the UK tech team was going to be customer-facing, building relationships and becoming trusted advisors. This would involve taking requirements, translating that into technical language and passing that to the developers and designers in Europe.

“I was nervous about this but every step we took forward proved to be a successful one.”

With 20 years at the same organisation, Martin’s route to CTO has been one that focuses on investing in teams, breaking down silos and building himself up as a trusted advisor and thought leader. With a technology background to boot, Martin was able to quickly gain rapport from the various teams he was dealing with without alienating the technologists under his wing.

“Once I had the rapport, that’s when I started to become a strategist and dictate change. Becoming the buffer between the technical team and management.”