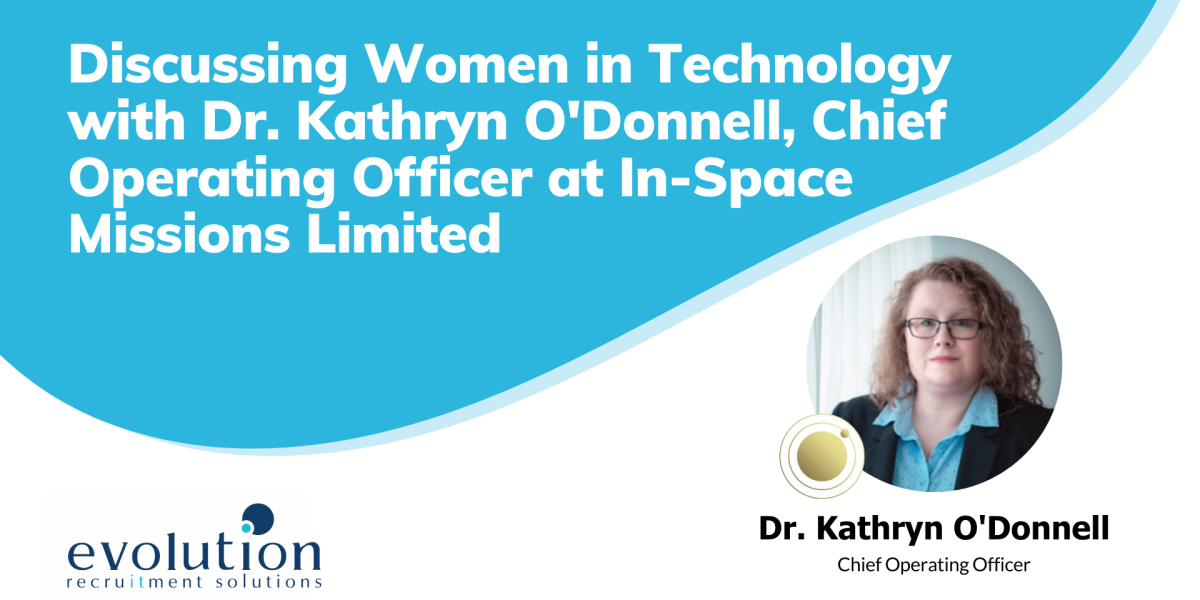 Dr Kathryn O’Donnell, Chief Operating Officer at In-Space Missions Limited, has always had an interest in maths and science. Her career journey has been a fascinating one, and we spoke to her to discover the path she has taken to her current role.

Kathryn’s appetite to achieve has always been there and led her to studying a degree in Natural Sciences at King’s College, Cambridge University, specialising in physics and astrophysics.

“I think I was always driven by people underestimating me. I thought, I am going to prove to people that a socially awkward girl from a comp can do the hardest thing possible.”

Following her degree, Kathryn knew she wanted to move into an industry-focused career, so she undertook a Masters degree in Astronautics and Space Engineering. This led her to her first role as a spacecraft operations engineer. During this exciting role, which involved working with the RAF to command a fleet of spacecraft, Kathryn gained invaluable experience.

After completing a PhD in Astrodynamics, Kathryn then spent the next 15 years working in both the space and cyber security industries, before joining the leadership team at In-Space Missions Limited. Since she started, the company has grown from 4 to 50 people, launched two spacecraft, and it has now been acquired by BAE Systems.

“It’s been quite a journey and a crazy few years. I absolutely love our team. I work with people that I’ve known for decades and we’ve all pulled together. It’s been it’s been really, really good fun.”

Working in a Male Dominated Industry

Kathryn has studied and worked in typically male dominated environments and was the only woman in her college who specialised in physics.

“You’re always in the minority, you’re in the minority in your academic classes, then you go into work and you’re still in the minority. Most of the time, it’s okay. There’s often insidious stuff that happens, assumptions about what you do, expectations about how you should behave.  There are very few people in roles you aspire to who are like you, which is difficult. But still, occasionally, you do get the proper shocking experiences of sexism as well.”

Kathryn has experienced both low level and more outright sexism through her career and believes that it is something that can only be solved with collaboration and being vocal about things that aren’t right.

“Certainly I’ve found, even in the last few years, people are talking about sexism more and highlighting that it’s not okay. Even if someone’s saying something as a joke, or “banter” – which is just the worst word ever because it’s often bullying, basically – we need to call it out and explain why it’s not acceptable. One of the key things I personally believe in is figuring out who your allies are – male and female.  We need to be working together to amplify each other’s voices and encouraging a more equitable environment.”

Challenging assumptions is a key part of this. Kathryn has had multiple experiences of people assuming that she is not in a management or leadership role, and has had to consistently prove her credibility in a way that her male counterparts may not necessarily have to.

“I’m not somebody to use labels normally, but I’ll always use my PhD title if I’m going into a technical meeting, just because I’ve had multiple experiences of people assuming I’m there to take minutes or make the tea. I’ve experienced that repeatedly in senior roles. No, I’m running the meeting, actually.”

One of the positives about being a woman in the space industry is that you are always remembered – something that Kathryn has discovered at conferences and meetings. Kathryn also recognises that there are some traits that are more accepted in the workplace for women than for men.

“There can be a certain way of acting that’s expected of men in the workplace, which isn’t necessarily expected of women and not sticking to that template can be problematic for men. For example, being empathetic, which in some archaic circles can be seen as not a traditionally male trait can be perceived as weak. These stereotypical expectations can cause harm in different ways – it’s the whole toxic masculinity thing. We have different shackles.”

For women who plan to follow Kathryn into the space industry, her key advice is to take the time to make sure that you know your subject inside out. A career in space engineering requires a strong academic foundation which needs time and dedication to achieve.

“Make sure you know your subject because you need to be leading by example.  Confidence is important too: stay true to yourself and do things your own way, but don’t gloss over the bit that needs the hard work!”