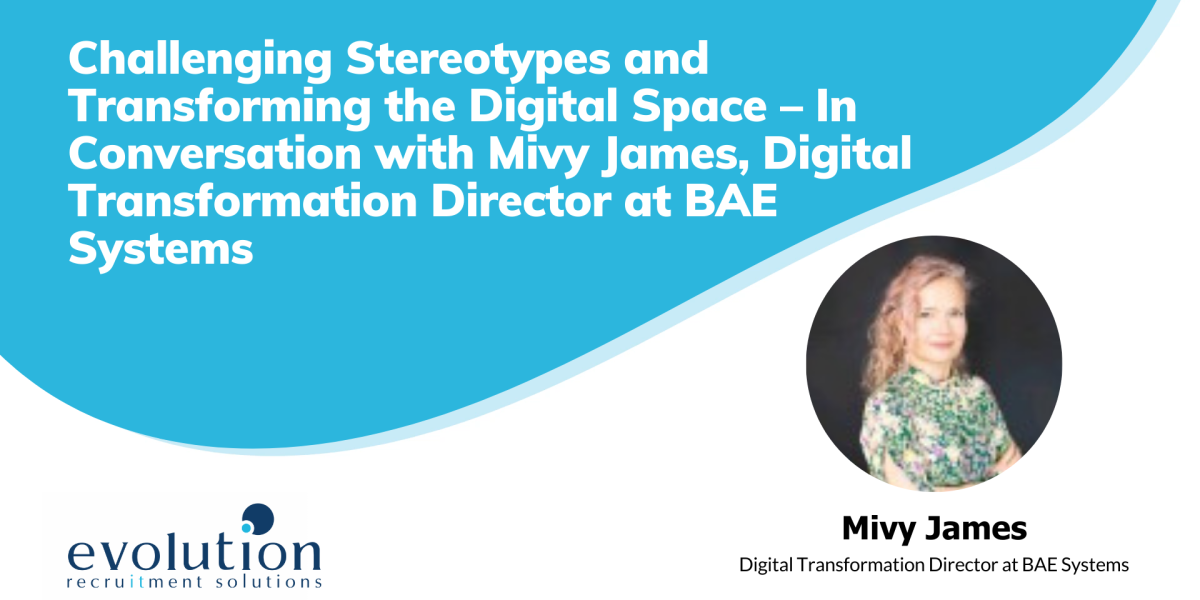 Mivy James, Digital Transformation Director at BAE Systems, works on various innovative digital transformation projects. She advises the UK government on their large technology projects, helping organisations to bring projects together and ensure that the new technology is fully embedded through cultural and organisational change.

Mivy has always been interested in technology. After learning to code when she was nine, it was clear that she would thrive in a tech career. During her school days, she would often find ways to use technology to make her studies more efficient – including writing a programme to complete some repetitive maths homework.

“The family legend is that my dad made a bet with the rest of the family before I’d even made it out of Infant School that I’d have a career in technology.”

That interest led to her studying Computer Science and Maths at Manchester University and beginning her career as a Software Engineer. The fascination with technology and – in particular – digital transformation has stayed with Mivy.

“There’s always something new to learn because I think it’s creative and an elegant discipline as well. For the engineering side of things, you’re always having to problem solve and you have to innovate. I think the pace of change is fascinating.”

Championing Women in Technology and Beyond

We spoke to Mivy as part of our series championing women in technology. In a field where, historically, women have not been as visible, Mivy is passionate about addressing the root causes for inequality.

It’s a problem that Mivy does not see as unique to the technical industry, and is actually prevalent in all industries – including those that are female dominated. Being held to different standards is an everyday norm and it is this that needs to change before true equality can exist.

Mivy is keen to highlight the skewed focus that equality programmes can have. When the spotlight is shone on the women themselves, we overlook the actual root cause of inequality. In fact, some initiatives can actually reinforce those sexist stereotypes.

“I hear quite a lot of things like ‘women lack confidence’ and they put don’t put themselves forward. I don’t buy that. I think we live in a world that lacks confidence in women.”

Rather than changing women’s behaviours so that they can achieve in a patriarchal society, Mivy believes greater change is necessary for society itself. This includes the idea that certain traits suit leadership roles more than others – those traits that tend to be masculine ones.

“There’s more than one way to be a leader. Women are told you’d progress your careers if any behave more like men. That’s not inclusive. There’s not diversity of thought.”

Day-to-day, Mivy works to change the damaging mindset that typically feminine mannerisms – such as talking softly, finishing sentences with a question and wearing bright clothing – are somehow lesser and less suited for leadership.

“I was once asked for 3 words that describe my leadership style and I deliberately said feminine. I said it to be provocative and because lots of people ask me questions about it. What would the world be like if we didn’t continue to reinforce this message that to be feminine is to be somehow inferior?”

Carving Your Own Path

For those following in Mivy’s footsteps in the tech industry, her key advice is to research and be aware of all of the different pathways that are available. There are a vast range of careers within the technology industry suiting all skills.

“Every type of discipline has a place in the in the technology industry, you can carve out whatever kind of career path you want. Whatever work life balance you want. My advice to anybody – which is probably true for any industry, not just tech industry – is to carve your own path and to understand your personal brands.”

Aside from this, Mivy has spent her career not dwelling so much on career development, instead doing what interested her at the time. This focus on enjoyment rather than considering where the next career step would come from has led to her learning what really motivates her.

“People can be anxious about where they are. What’s the rush? Enjoy it and enjoy what you’re doing. Enjoy the learning experience.”

Part of the joy of being a woman in the tech industry, for Mivy, is the ability to bring something different and provide a fresh perspective. Being able to contribute and driving creativity because of that is one of the key areas of satisfaction from her role.

This difference in perspective is so important within digital transformation and – particularly – artificial intelligence. It is vital that a diverse range of people are included in the development of artificial intelligence to ensure that there are as few gaps in the data as possible, making artificial intelligence work for everyone. However, this is an area which urgently needs to be improved before virtual machine learning becomes too embedded and problems then can’t be fixed.

“It’s important to minimise the amount of bias that gets built in because theoretically machines could be better than the rest of us. Human beings are inherently biased. Machines could be pure but they learn from us and they’re the worst of us because they amplify it. Machines are rigorous and they stick to the decisions they make based on data. So if you’re training that bias, there will always be a bias and never any exceptions.”