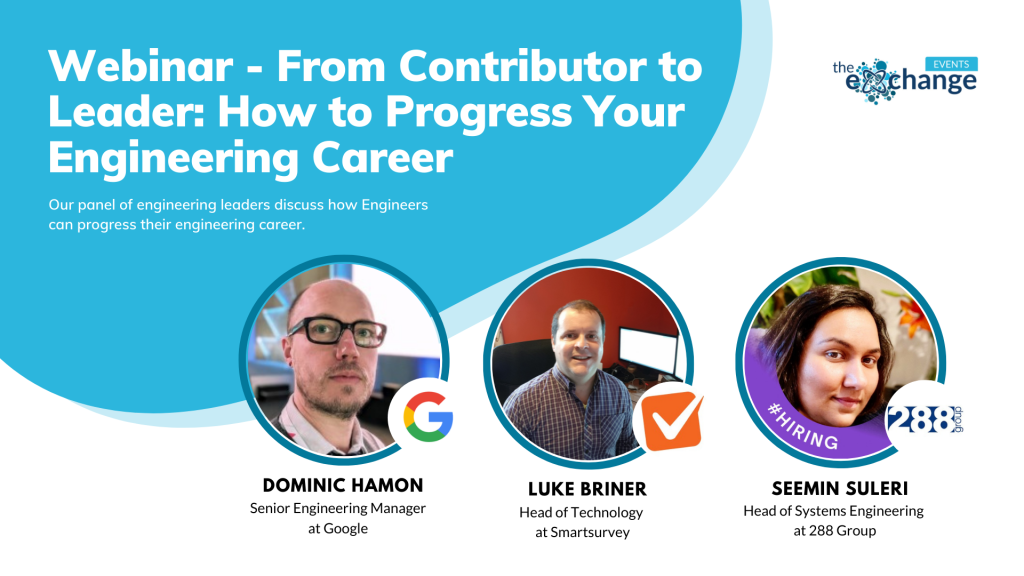 What Kind of Engineer Do You Want to Be?

What are the different paths within an Engineering career and which one is right for you?

Seemin on Figuring Out What Motivates You

You need to ask yourself the question about, about, which is your area of interest, because a lot of the times you find engineers who are just focused on technology. So if you are that engineer who was just, you know, doesn’t want to be kind of like a people manager, then there are several options you can have, you know, you can go towards architecture side, you can, you can specialise in that, and there are specialist roles within companies as well, depending on the domain. So you can be an area expert in that and then and then be influential and, and do your role in that. The other side is if you’re more people oriented.

There are rules about team leadership, but that might come with people responsibility. So you need to be able to effectively communicate across those, you know, across across people you’re responsible for across different levels. And then you can go into managers and senior management roles around there as well. There are also other options that I find that very interesting, which some of the developers I’ve seen, have chosen. So for example, the role of a product owner, for example, some people have even chosen to go into business analysis, because they just find that very interesting. So it’s not like if you start off as a developer don’t think okay, I will always do that there are several aspects you can be involved in.

What Hiring Managers Look for When Considering Promotions

What signals should you be sending to your boss to say you’re ready for the next level?

The way that we very broadly assess is we try and keep people stretched, right? So we try and give people challenges at every step. So we work with everyone individually and figure out where they are and what they’re ready for. And we always have an eye on what more they could be doing. The growth, generally speaking, is in terms of ability to work independently. And the ability to take on larger scope projects from individual tasks or projects to larger, more complex, more ambiguous problems. But what we try and do is we try and stretch people just ahead of kind of where they currently are. And then at the point where they have been, essentially doing the role that they would be promoted into for a while, and in a way that shows that it’s sustainable. So they’re not, you know, working ridiculous hours, they’re not pushing themselves really hard. It’s just very natural for them to be in that role. That’s the moment at which we kind of flip that bit and say, okay, you know, you you’ve got it, it’s, it’s more like, it’s more like a badge. At the end of the process of having done it rather than we’re going to bump you up and see if you can do it. Yeah, that’s how we kind of approach things. It seems to work pretty well. It means that everyone knows what expectations are in front of them. And and you know, you get to kind of test people out and see how they’re doing before you push them into something that then maybe not ready for which is The worst thing pushing people out too early is, is it’s often unrecoverable.

What Should you Include on Your CV?

What can you include on your CV to stand you out from the crowd?

Let’s imagine that especially in a smaller company, you want to take on somebody who to help you create, let’s say, a microservices infrastructure. And let’s say nobody in your company really knew that much about that. There’s obviously a benefit to somebody applying who has done microservices before. But if you had some kind of certification, which said, Well, I actually did a course in this past and examine it, then, again, that can be a tick compared to somebody else who doesn’t have that.

Seemin on Side Projects and GitHub

What else have you done outside of the traditional channels? We want to see what else you bring to the table. So we’d be interested in projects on GitHub. If you’ve demonstrated your aptitude by building a side-project or a passion project it not only shows us how technically gifted you are but also how motivated you are to find solutions.

How to Ace the Interview

An audience member asked a simple question: what do hiring managers look for when interviewing?

Dominic on how he Interviews different positions at Google

We try and give like realistic technical challenges that you would face and then just see how you think through it. And often what we’re looking for is not necessarily that you get the right answer the most optimal algorithm. But can you can you think your way through, can you explain how you get to where you got, you know, at the end of the day, for more senior roles, we might look for certain things like edge cases, boundary conditions, proactive testing of code, we might put a slightly higher bar on the actual code that you write in the interview, things like that. But for junior positions, we’re really just looking for those foundational, fundamental technical skills that give us the confidence that on a team, you’d be able to take on tasks, take on technical problems, and solve them with help from the team. You know, if you’re a junior engineer, but yeah, that’s what we’re looking for. That’s that’s what we try and assess

Luke on Aptitude, Attitude and Ability

Aptitude, Attitude and Ability – I’m always trying to measure people up against those sort of three axis when they when they interviewing. Now, obviously, the more experienced they are, there’s going to be an assumption that if you’re a senior, I’m expecting your ability level to be up here. So I might ask a few technical questions. And if you’re calling yourself a senior, and you can’t answer some very basic technical questions correctly, then it’s a red flag.

Whereas if you’re a junior, you might have good ability, and that’s great but that’s not necessarily a barrier. But then, you know, aptitude is very much about problem solving, evaluating new things based on what you already know. So how can I approach a new problem? So sometimes we might give somebody a test out of left field, again, not anything necessarily particularly complicated, but it’s that same thing? How do you approach a problem? Have you got a narrow mindset? Are you going to see the trick in the in the question? And then in terms of attitude. There’s a large element of gut feel about an interview, you’ve got very limited time to get to know somebody. So the more you can inform your gut feel, the better. And that’s why the preparation of the candidate is really critical, in terms of maximising their chances.

Seemin on Why Asking for Feedback is So Important

It’s so important that you ask for feedback when you’re unsuccessful. Because, one, it gives a good impression, even if you didn’t succeed, you don’t know how close you were. And also, we’ve had people who come back to us, and they worked on the feedback. And it gives a huge amount of confidence to you to say, okay, this person, not only listened, but they worked on it. So this show shows initiative, which shows a lot of, you know, drive on your part as well.