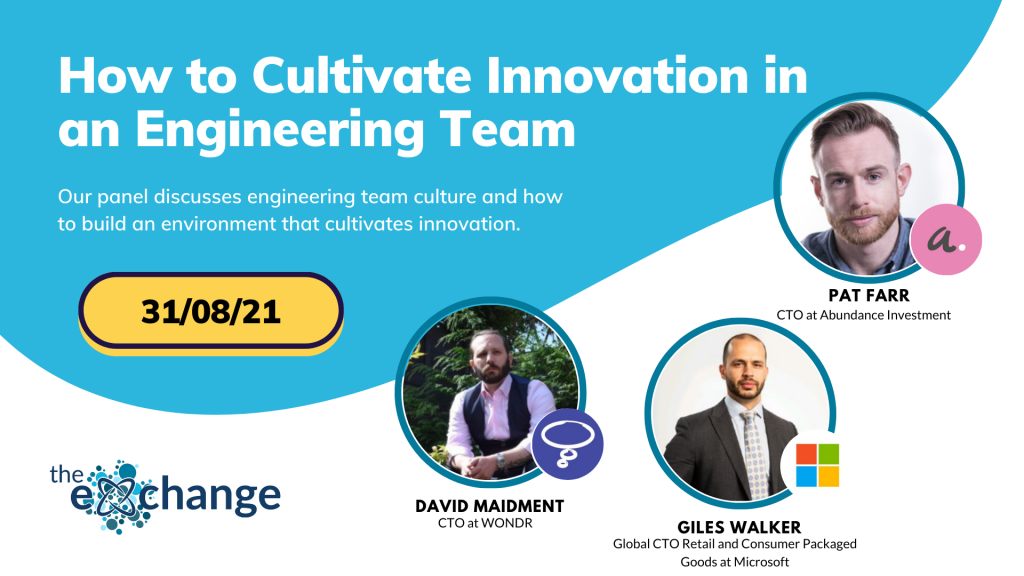 Webinar Rundown: How to Cultivate Innovation in an Engineering Team

The Importance of Psychological Safety

Giles discussed the importance of psychological safety and how it’s paramount to building a culture of innovation.

One of the things they did was monitor who was speaking in meetings, and how often they were speaking. We’ve all been there where you get one Exec that comes in and dominates the entire conversation before going: ‘Okay, guys go and be innovative’

One of the things I did to try and address this was to start ticking off who was speaking during meetings. For those who weren’t contributing I would specifically call them out and give them the platform to speak. I’d go down the list and bring people into the conversation because, afterall, this is meeting and we’re here to collaborate not dictate.

Striking the Balance Between Process and Agency

We’d live in a perfect world if we all had waves of innovation everyday. The reality is that we will often need to find space for people to put themselves into the right frame of mind to be creative and innovative. We asked Pat Farr how he makes time and space for his teams to make the most of their motivation and innovation.

First of all, how do you manage your own time? And then how do you create the greatest structure for your team to manage their time? For the second one, it’s about striking the right balance with just enough process. It’s a tough one to crack because you have people who have the requirements to deliver, that have reporting cycles to check in – those are the type of people you don’t want to take agency away from because you could cut off that spark.

One model I’ve had some success with is a version of base camp shape-up. So if you find yourself spinning your wheels or feeding the beast on a two week cycle, make it six weeks. Extend it and give people breathing room to start to prioritise some of those what you call low priority commitments. Some of that more exploratory discovery work, allow those slow hunches that I talked about earlier to start to take hold a little bit. This model also encourages engineers to write words rather than code – which is critical for engineers to become engineering managers.