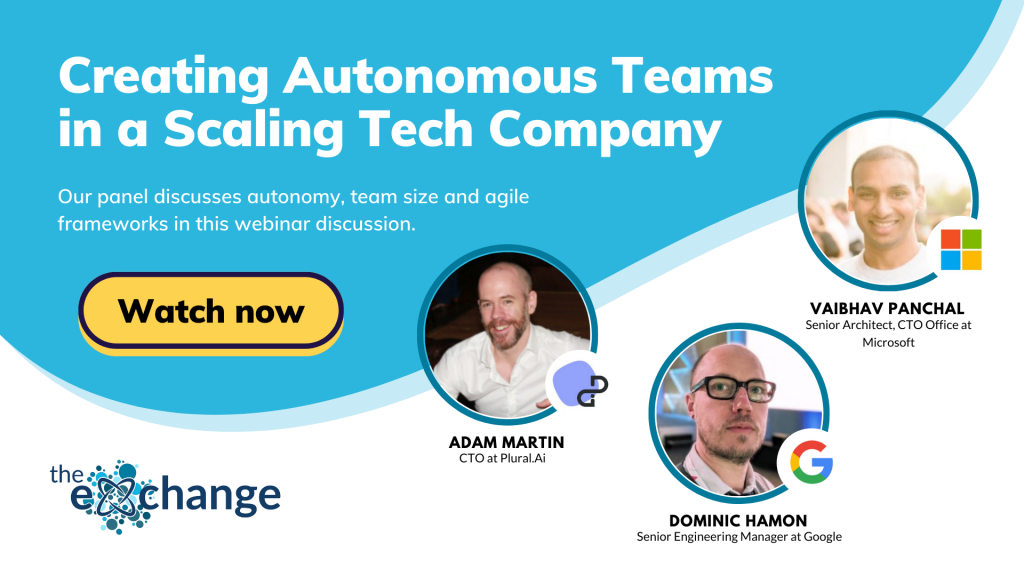 Here are a few highlights from the discussion

How do we define Autonomy?

So I used to not really think of it that much. I thought autonomy just meant your boss doesn’t tell you too much about what you’re going to do. I thought this was just the opposite of being micromanaged. And I thought that for many years, many, many years. I didn’t think about it much more than that. But then, as I alluded to, three or four years ago, got to work at a company where we played around with really digging into what we mean by autonomy and what we want to achieve by autonomy. And coming out as that what I look at it now, as is. It’s I think I’d say it’s the answer to how you scale an organisation without losing what’s great about it. It’s all about the the fundamental basis, the fundamental root of how you decentralise whilst peacekeeping power in the hands of those who know how to use it. So if I give a team autonomy, my real purpose is I want them to they know what they’re doing. They’re the best place to make decisions about how to do that. And of course, that opens up many cans of worms of how it can go wrong. And all this stuff you still need to make decisions on still needs to do.

What are the Main Barriers to Autonomy?

I think there’s a couple of others, though, that I’ve seen, when it comes to being outcome driven. I think one, one of the obvious blockers is being able to define your outcome and agreeing on your outcome, I think that’s one of the things that I’ve seen as a challenge. And actually, we’re facing it right now, in my own organisation, where we have some, you know, top level business metrics that we want to affect, but then when it gets to that kind of middle layer, being able to define something that you want, as an outcome, that you are also confident that you can measure and come back to that then the team can run with is is pretty difficult in some circumstances. So there needs to be a little bit of upfront investment, to define to make sure you can measure to track all that kind of thing, your outcomes, and then you can have people just go off and do things. Without those. There’s a constant kind of check in procedure. Well, you know, is this still the right thing to be doing? Are we sure it is, you know, reprioritizing, things like that. linked to that kind of priority discussion as well is dependencies between teams, as as companies grow up, and as organisations grow. And as organisations get deeper and wider, the possibility of having mismatched priorities or dependencies between teams only grows. And then autonomy starts to become a little bit limited, because a given team somewhere in that organisation might be dependent on some other team elsewhere, you know, sticking to what they’ve promised to do sticking to the same thing. And when that breaks down, then you end up with this, you know, lack of autonomy in the sense that teams just can’t make forward progress. teams don’t feel like they’re in charge of their own destiny anymore. Because largely, they’re not. Some of the outcome driven stuff can help as long as you have that alignment. And it comes to exactly what Adam was just saying, If, from the top down, you have this very clear vision and somebody who’s a vision holder who can push that forward through the organisation, then you can avoid some of these traps, I think. But when you end up with a weaker vision holder, then different parts of that organisation are going to start going off in their own directions. And then you’re going to start seeing teams getting stuck behind, you know, relying on other teams and not being able to move forward basically. So yeah, it’s all kind of interrelated.

If you are a vision holder, you need to be able to explain to me what the vision is tomorrow, next week, next month, next quarter, next half, next year, next two years, next five years. If you can’t explain all of those concisely, and they’re all different, they’re all shared, but they’re all different, then you’ve got problems. And maybe for something really big, maybe longer than a few years. What I often see is a vision holder is really good at five years, and quite good at six months, and terrible, one to two months and kind of okay, or, likewise, just spotty. And it’s those, each of those dips, what tends to happen is it’s kind of the chain is only as strong as the weakest link, and your weak link and your ability to contextualise the vision and provide it to different teams in their context. And they’re relevant related to their planning horizon and their issues. The weak link is the one that’s going to scupper everything else because it is then going to cause that team to then make the wrong decisions and give the wrong information to the other teams and then spreads out. Now it’s not completely a line of dominoes. It doesn’t just all collapse at once. But it’s a weakness that weakens everything else. Obviously, with autonomy, you have a lot of robustness because all the teams are able to work slightly independently. It’s slightly decoupled. But one team that’s struggling will pull down the teams next to it, it will weigh them down and drag on them. So yeah, that that ability to convey your vision to be able to say what your vision is and contextualise it on different timeframes, and more generally contextualise it for different teams, different situations, whilst doing the magical thing that Don was saying, Be consistent. You need to be clear, your vision needs to be consistent, even contextualised in different scenarios, and especially contextualise through time.

Autonomy is an Exchange

Just because team has autonomy to choose any text type doesn’t translate into do whatever the hell you want to do, right? There is a still respect for the principles of the organisation that needs to be followed, right? I mean, just because I got autonomy and my leadership trust me to do, I do need to respect the kind of overheads it’s adding into my organisation for what I’m choosing. So great power becomes Spider Man, blah, blah, blah. But equally, at the same time, if I’m getting autonomy, that there is an expectation out of me, that I would be, I would be directing towards what what makes it easier for the organisation and all my, it’s an exchange. It’s not a transactional exchange, but the team who’s getting it, there is a trust being put onto that. And in return, Tina’s making an cautious effort to make sure that organisation is not getting a lot of overheads, right. As part of this. That’s the only point I would like to make sure that that the team doesn’t go I have everything I want. I just do whatever I want.