What Makes an Effective Engineering Manager? 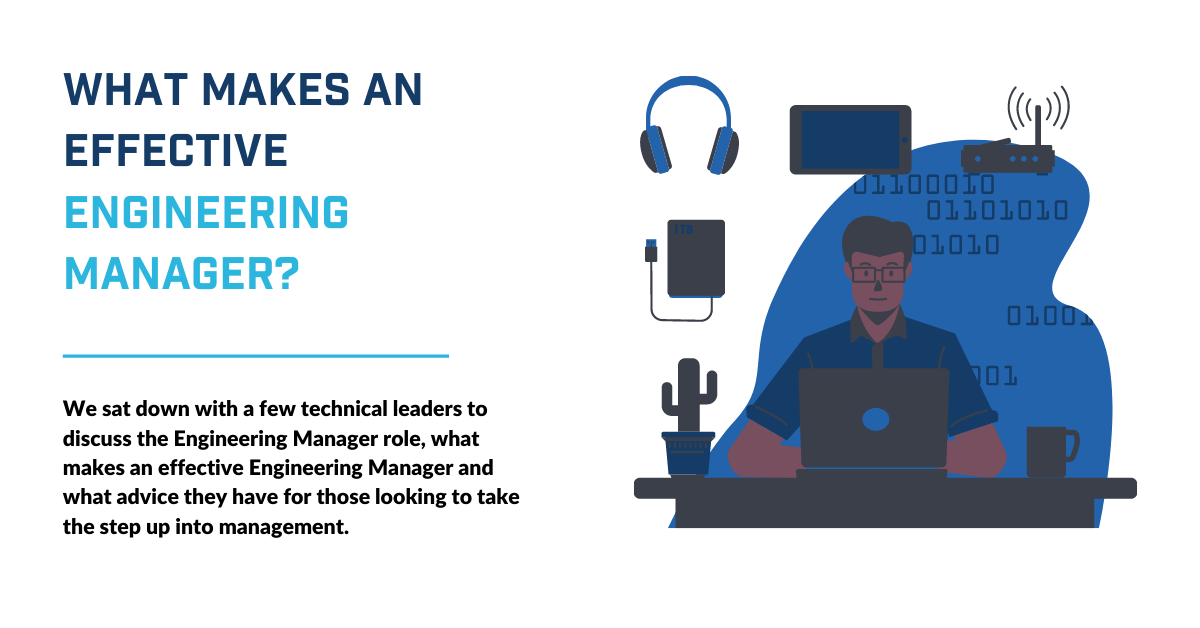 Learn How to Give People Autonomy

“I had a really good manager. And he kind of taught me how to become hands-off and just trust the team. Once you realize you're there to be an enabler that's when you can really flourish as a manager.”

Dropping any pretence of ego, an effective Engineering Manager is paid to clear away the roadblocks that stand in the way of the Engineering Team’s objectives. For some, who may have come from a traditional development route, this hands-off approach may be a difficult one to accept.

As an individual contributor, your responsibilities are rather clearly defined. You get to work on time, you’re assigned certain tasks, and you’re expected to deliver them efficiently and effectively.

When you become an engineering manager, that’ll change — your responsibilities will no longer be as defined and independent. Your day-to-day life will look different and your responsibilities will increase a whole lot more. With that said, you’ll also get a greater chance to make an impact on your team’s culture and collaborate with other teams to reach important business goals.

Not only will your work responsibilities change, but your entire mindset should change as well. Bill, who spent a large portion of his early career as an individual contributor, went through a similar journey. As he moved away from the hands-on elements, Bill took up the ‘enabler’ position, acting as a buffer between his team and the rest of the business.

“One of the most productive times I had as a manager was actually when I stepped back and did some of the support. I looked at the pain points that were coming through the support channel and looked for patterns in those. I was working in conjunction with a product manager at that time, and we had some really mutually supportive conversations about our different takes on what customers wanted and ended up coming up with solutions that worked for us and really kick-started the product acceptance across the business.”

For those who have their sights set on the Engineering Manager position, Bill recommends finding a mentor to overcome those early jitters when taking up a role with a whole new set of responsibilities.

“I had some early dabblings with being a manager and I'd been dreadful. The thing that made a difference was having a good mentor. Look for people that you see doing management well, and ask them to mentor you. Look in your peer-group or somewhere completely different in your organization where you see other managers doing things well, talk to them and try and learn from them.”

Focus On Your Adaptability

Tom Peirson-Webber is an Engineering Manager with a diverse career history that has seen him move from sales to development. Tom places significant value on adaptability when it comes to leading Engineering teams.

“I'm not just a coder, I'm not just a product leader or a people manager. I’ve done lots of different things and the only constant has been that adaptability.”

While it may seem like a platitude, arguably the most important skill for any leader is the ability to set a direction and communicate it effectively to his or her team. This doesn’t always mean verbal or even written direction—the best leaders back up their words with behaviour that sets the standard for everyone around them. When you’re dealing with technical problems, you often have to work with individuals who know what they want but not how to achieve it – this is where Tom’s adaptability and breadth of technical knowledge really come into its own.

“We have this mixed bag of skills that means our focus is on engineering the right products, instead of doing a particular task, and then if neccessary, passing it off to the next person to do the next step. This means that when people come to us with things they want but without the technical knowledge, we’re able to help them figure out what they need and then supercharge it”

As opposed to deepening your knowledge in one particular area, broadening your technical knowledge across a range of disciplines will enable actionable conversations with a range of different stakeholders from marketing to DevOps to Data. For Tom, this breadth of knowledge has been key to his success in the Engineering Manager role.

“As an Engineering Manager or a Dev Manager, you're running the entire process from end to end, which includes design, requirement, gathering, development, deployment and productisation. Focusing on just a single area would mean that when it comes to managing more than just that area, you may not have the foundational knowledge to ensure you can help people deliver their best work regardless of their discipline.”

Dan Doughty is the Software Development Manager at SDC Builders. With 6 months in a management position before COVID-19 struck, Dan had to learn quickly to manage a remote team while maintaining his regular duties as the tip of the technology spear at SDC. Confidence, in difficult situations like this one, is one of Dan’s core management methodologies.

“I think the confidence certainly plays a huge part in being a manager, especially if you're going to manage people more experienced than you. So part of it does come with confidence. And just knowing that if you found yourself in a position of management, someone at that business trusts you.”

Dan, who has been thrown in the deep end multiple times, knows that confidence comes in different forms. For one, there’s having confidence in yourself – not only to do a good job, but also to do the right thing by your team. For Dan, who manages Software Developers in a Construction Company and knows how difficult this environment can be for newly graduated developers, believes in leading with empathy.

“You need to understand that, throughout your career and throughout your life, you're going to come across incidents where people are trying to make decisions that are best for themselves and it’s very easy to overreact to that situation.”

As human beings, we emote before we even reason. So despite an intellectual desire to respond to the challenges at hand with calmness, courage and optimism, sometimes emotions – particularly anger and fear – can highjack rational thinking and derail decision-making in ourselves and others.

Simply defined, empathy is our desire and willingness to see as others see and to feel as they feel. According to studies carried out by Development Dimensions International (DDI), empathy is the single most important leadership skill that outshines all others.

“At the end of the day, you want the best software developers working for you. If they’re the best, they’re going to attract attention from others. If you’ve showed empathy to them in the past, you’ll have made yourself approachable and might potentially avoid a loss in the team.”

For Dan, who works with incredibly talented developers, it’s about embracing the step change and avoiding the very natural response to react negatively to someone who is far more skilled in an area you need to have oversight on.

As a manager, you will be judged based on the success of your team. That means that they are your first priority. The minute you start deviating from that path is the minute you wander into "bad boss" territory.