Overcoming Challenges in the Tech Industry – In Conversation with Sam Watkins, Product Manager at BT 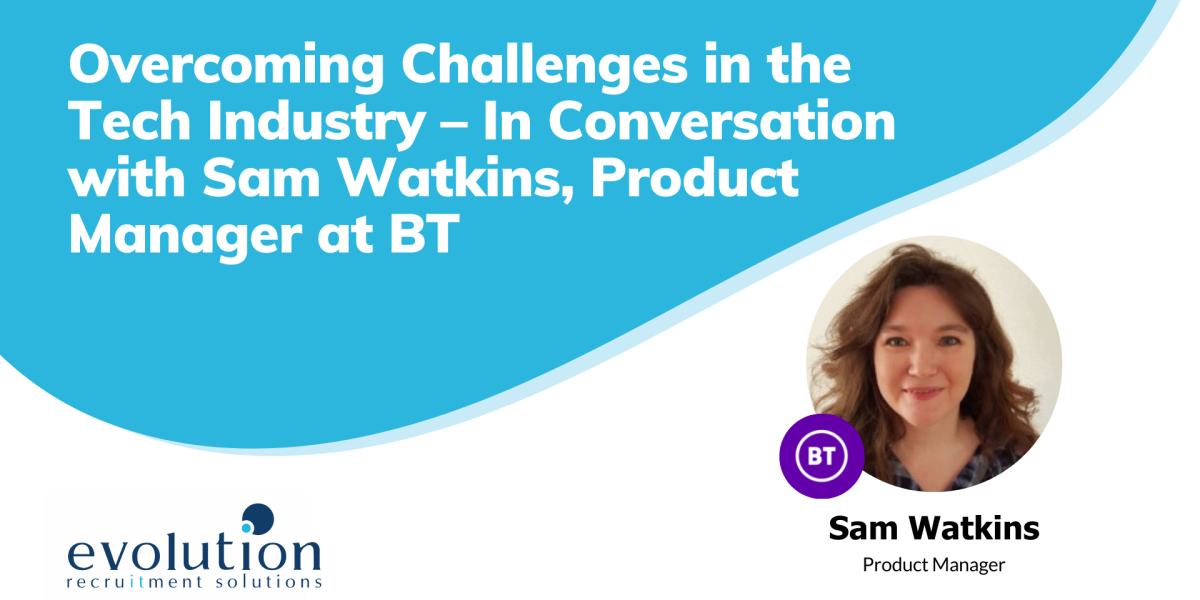 Sam Watkins, Product Manager at BT, has been interested in technology since a very young age. As a child, Sam was diagnosed with type one diabetes and had to a significant period of time in hospital. Her mother was determined not to let the diagnosis – and time spent away from school – to negatively affect her, and so she bought a home computer for the family to ensure that Sam wasn’t left behind.

Using the computer, Sam and her brother spent weekends learning programming. It was from here that her passion for technology and, in particular, solving problems using technology grew.

Sam joined BT in 1997 and, over a career spanning almost 25 years, has worked on a variety of innovative projects.

Sam’s interest in technology lies in finding answers to common problems; saving both time and money with her solutions. From reverse-engineering YouTube to automating bids thus saving weeks of work, Sam loves to use technology to make working life easier for those around her.

Currently, Sam is working on a web service that, through talking to other programmes and the internet, can form questions for pricing and planning tools to create large bids. This project has revolutionised ways of working, and was an idea Sam initially had in 2005 and took a sabbatical to develop.

Sam knew that the idea had vast potential, but it took significant work from her before it was taken onboard. This dedication to her work – and a concept that she knew would be valuable – is something that Sam has taken throughout her career.

“It’s been very interesting to push it back into BT, because I took a sabbatical to do it. They said to me, that’s impossible. And I kept saying, I don’t think it’s impossible. I think I’ve got a methodology that would work.”

Overcoming Challenges in the Tech Industry

We spoke to Sam as part of our series of interviews highlighting and championing women in the tech industry. In a male-dominated sector, women are often overlooked – but Sam has also had her diabetes to contend with. Prior to the pandemic, her diabetes would occasionally mean that she may have to work from home without prior notice. Although ableism has meant that some managers viewed this poorly in the past, management of the disease has given Sam some very valuable skills.

“With the diabetes, people are fine with it until they realise that actually, you do need support and help and the conversations change. Instead of being ‘let’s see where we can take you, how we can take you to the next level’ it’s ‘let’s see how you get on’. There’s just this big pause and you think, actually, the reason I’m as good as I am is because I have to make sure that I can work seamlessly. Yes, I do occasionally need to work from home with a moment’s notice. That’s been actually the nice thing about COVID. It’s been almost invisible.”

As well as developing her career alongside managing her diabetes, Sam also experienced the challenges of becoming a mother as well as being a tech professional. The difference between her husband being coached before going for a promotion and her own experience of having very limited support was evident.

Sam’s decision not to change her name after her marriage also raised some eyebrows. However, this was a non-negotiable for Sam who is, rightly, proud of the work she has done.

“It’s my business name. My whole career has been based on the work I have done. From day one. From the first programmes sold on the playground, when I was 12. From my homework to my degree papers, my name is the most precious thing.”

Advice for a Successful Career

For those looking to follow Sam into a career in tech, her advice is to be courageous, seize opportunities and don’t be afraid of making mistakes.

In addition, when joining a large company like BT it is important to learn everything you can about the way the business works.