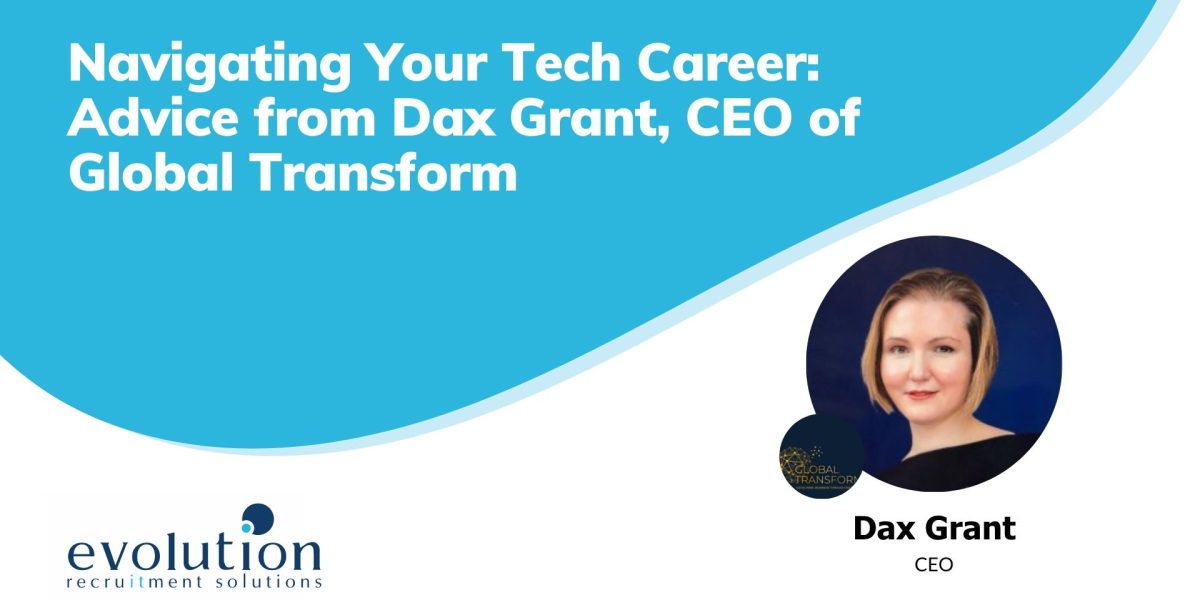 Dax Grant’s journey in tech began when she was in university. Studying Economics at Cambridge, she enjoyed learning about businesses and how they worked, as well as gaining experience working at IBM and Barclays. As well as discovering how the finance industry worked, she was able to gain an understanding in how the customer experience worked.

Dax worked at Barclays for ten years, in a variety of roles including strategy and digitisation, before taking the opportunity to move into more independent work.

“I wanted to deepen from understanding of a single organisation to understanding more about the business ecosystem, and I am passionate about culture. Being able to work in different organisations provides a good ground for bringing together diverse business and technology groups.”

Now a CEO, Board Member and Ambassador for a variety of organisations, Dax enjoys utilising her skills to develop teams, connect people and provide both business and technology leadership. Dax is listed in the Global CIO 100, is a 100 Powerlist Keynote Speaker, CREA Awards Winner and on the 100 Women to Watch List.

Dax has two children and has managed her career and studying an MBA alongside being a mother. She is passionate about how the skills gained through motherhood are also skills which are highly beneficial in the workplace.

“Motherhood is leadership. It’s one of the coolest, neatest things you can ever have the privilege of – having someone to look after with no instructions and no manual. If that isn’t the key thing for a team leader, I don’t know what is. You’ve got the best intentions for this person, and you want them to flourish in the world. That is what team management is about. It’s on a different scale, of course, but I think it’s a tremendously rewarding personal journey.”

Every woman is different, and it is important for companies to support women during maternity leave to ensure that they don’t see it as a setback to their career and more of a springboard. Dax sees maternity leave as a step in your path, not a pause in your career, and encourages women – where possible – to embrace the opportunities that it brings, whether that be a new or changing role, or personal development.

As a woman in the male-dominated tech and finance industries, Dax has had experiences where unconscious bias can have an impact on the environment. It is important for all of us to build our internal beliefs to be as open as possible to grow and nurture and build confidence and positive careers.

“I do believe there are things where each of us speak with the greatest of intent, but it is important to nurture a positive impact. As an example, in one of my organisations my profile went out without a picture, just the name Dax. I met someone who had seen the profile and their first reaction was, ‘oh, you’re a woman.’ It wasn’t anything large, but it was the potential inference that they’d already presumed that Dax was a male name.”

Breaking unconscious bias comes from explicit, thoughtful use of terms which counter this – for example, using the term ‘chair’ instead of ‘chairman’. By making a conscious effort to do this wherever possible, we can create a shift that will make a difference to everybody.

“As executive leaders we need to address myths in a way that builds a positive culture. If we’re inclusive, the functions we lead naturally become more and more diverse. And that’s a big theme for today, tomorrow, and probably for the future.”

For those following in her footsteps, Dax’s advice is to remember that your career path is for you to own and influence. Your line manager and organisation can support though we each create our own path. It is down to you to advocate for yourself and take yourself in the direction that you want to go.

“If you’re the captain of your ship, then you’ve got to sail it. And if you’ve got to go into different waters, you’ve got to know how to equip on your boat. So do think about where you want to steer too next.”

Deciding on direction comes from a variety of factors including talking to a range of different people, so it is important to create the opportunity for different conversations to become aware of paths that you might not have considered that could add value to that fulfilling and rewarding career.

“Your manager, your mentors, your sponsors will all support you. But you’ve got to captain your ship.”