Moving into the NHS from a Career in the Private Sector 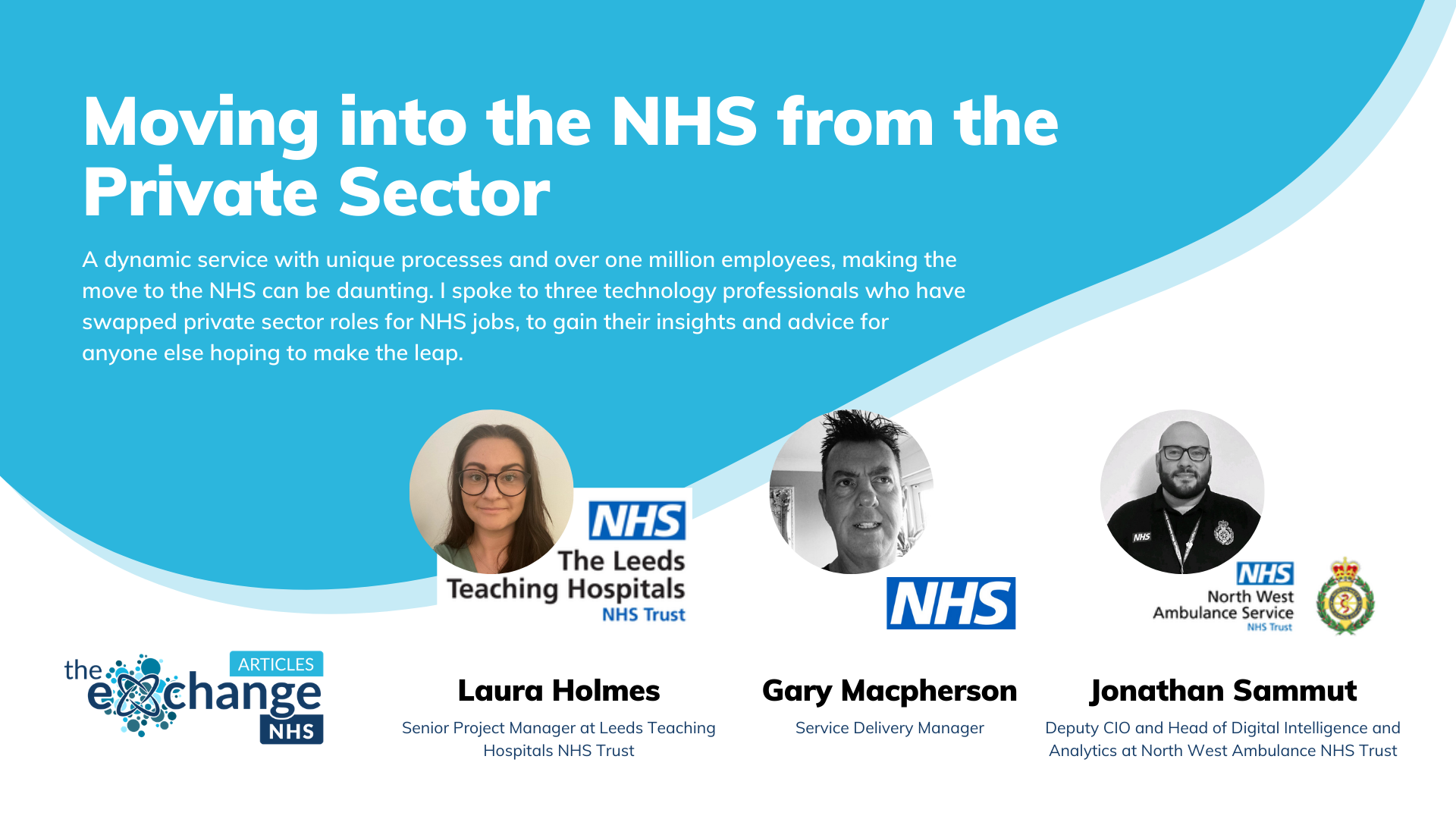 There are many well documented differences between the public sector and the private sector, and particularly between the NHS and the private sector. A dynamic service with unique processes and over one million employees, making the move to the NHS can be daunting. I spoke to three technology professionals who have swapped private sector roles for NHS jobs, to gain their insights and advice for anyone else hoping to make the leap.

There are many preconceptions about the NHS, in particular surrounding red tape and the willingness to embrace new digital solutions, and I was interested to hear about the experiences of people who have recently moved across.

Although all parts of the NHS have their own nuances, and I spoke to people from varying trusts, it is striking to note the similarities in the factors that they enjoy – namely, the patient-focused nature of the work, and the desire to consistently grow and improve.

“They’re Not Stagnating in Any Way, they focus on development and improvement.”

Coming from a background of working for different digital agencies and TransPennine Express, what struck Laura Holmes, Senior Project Manager at Leeds Teaching Hospitals NHS Trust, most about the NHS was the sheer scale of the teams. Working out the complexities of the organisational chart was a unique challenge, made even more difficult due to starting the role during a lockdown. However, the benefits far outweighed these initial difficulties. The size and nature of the project was one of the things that drew Laura to the NHS.

“It’s a massive transformation, and a huge challenge. It’s an interesting project to be involved in.”

It is always interesting to hear about the differences between the public and private sectors. Of course, depending on the role that people go into, those differences can vary. For Laura, one of the most noticeable differences was the attitude towards developing a business case.

“That’s a really refreshing change, rather than just going out to find the quickest and cheapest solution, they focus on the needs and future requirements first. Whilst of course looking for value for money! That’s quite refreshing.”

Rumours of red tape are one of the main reasons that people are put off leaving the private sector for the public sector. However, Laura found that the opposite was true – and that red tape at previous companies was worse than for her project at the NHS. Laura recognises that this may be down to the support she has had from stakeholders.

“If I hadn’t had the enthusiasm of a number of stakeholders and teams saying we really need this project, it may have been a more difficult process. But at least at the Trust we knew the process and where the red rape was, this isn’t something you always find – so we were better prepared to tackle the task”

The NHS culture is often a driver for people making the move to the public sector and it is seen as a supportive and encouraging working environment, despite high pressure.

“There’s a lot of support in the NHS, and they are looking to do the next best thing and constantly improve. They’re not stagnating in any way, they focus on development and improvement.”

Laura recommends making the leap from private sector to NHS, particularly due to the rewarding nature of employment there. Not only do rewards come from completing projects that can be difficult and involve complex negotiation, but also from consideration of the end goal.

“You know this is actually having an effect on the Trust and how you could improve a patient’s experience. And that’s a nice thought and reward at the end.”

“It’s All About Doing the Right Thing.”

For Gary Macpherson, the people-centric nature of the NHS was evident as soon as he started his role as a Service Delivery Manager in November 2020.

“I spent the whole of my working life in the private sector, working for large corporations, and always been focused commercially on what we’re doing – that was the primary view – P&L performance. It’s different in the NHS. It is patient care first with commercial considerations secondary. It’s all about the people within the business. It’s all about doing the right thing.”

The surprisingly low amount of red tape has been immediately evident, though this could be down to the funding boost the NHS has received for the handling of the pandemic.  This funding injection has also provided more opportunities for training and personal development.

“I would say, the provision of IT services, onboarding people at the speed in which we can and the amount of investment is remarkable. It’s incredibly  positive. For example, if we need to go out and buy a lot of IT equipment, my perception would have been a year ago, NHS, right, it’s going to take you three years to get signed off, but that isn’t the case.”

Gary, having only worked at the NHS during the pandemic, is interested to see whether the swift processes continue in the future. One challenge he has come across is the banding of staff, which is so different to the private sector.

The hierarchy has been immediately noticeable, and one culture change that particularly struck Gary is the fact that because of the banding structure, NHS staff immediately know what colleagues are being paid.

“If someone says to me, , that person’s a band six, I know immediately an approximation of what they’ve been paid, which is bizarre, right? Whereas in the private sector, you have no idea of that.”

Although Gary misses the pace of the private sector, and the thrill of new customers and new deals, he has found many benefits to a role in the healthcare sector.

“I speak to a lot of senior doctors, the head of nursing and people like that talking about pain points and how we can help with that. So fixing problems for them absolutely is one of the things I really enjoy. Helping improve their working environment is something absolutely I think is great and I really enjoy.”

“Stepping into the Public Sector, I’ve Developed a Greater Sense of Pride for the Place that I Work.”

Jonathan Sammut, Deputy CIO and Head of Digital Intelligence and Analytics at North West Ambulance NHS Trust, is also very new to the NHS, having started his role in December 2020. Although he had experience in the healthcare industry through his work as BI Director at Health Management, an occupational health business, this was from the private sector side.

As with Laura and Gary, Jonathan has found it extremely fulfilling to work in a role which directly influences patients.

“In my previous role in occupational health, I started to realise I had a real desire to help people through data. For me, that really stands out, the fact that I can actually help people and patients through data, you know, whether that’s improving the service or improving the performance of said service, that end person still benefits from it. So for me the opportunity to join the NHS was just far too great to pass, that I could do that on a bigger scale.”

“One of the challenges I had was understanding the complexities around funding for one, but I think on a bigger scale, it’s the complexity of the machine that is the NHS. There are so many different parts and facets to it. And it’s trying to understand how a lot of that hangs together, both from a process and a data perspective.”

Despite the enormity, the culture of the NHS is well embedded, and this is noticeable after only a short time working there. It is this feeling of working towards the same goal and same objective that makes working there such an enjoyable experience for Jonathan.

“The colleagues that I work with, every single person I’ve spoken to within the trust, all share that same mentality in terms of helping people, trying to do the right thing for people, breaking down any barriers that we have. And I think it’s that collective effort that is irreplaceable.”

The security of the NHS is often a driving force for people moving from the private sector, and this has been particularly true in a year where so many companies have taken a hit. However, the NHS manages to avoid stagnation that can come from security, through the breadth of talent they have on board.

“That, for me, was another selling point outside of job security, it’s their constant drive to be better and innovate.”

With a huge organisation, though, there can be challenges and Jonathan has found that some of the stigma of data being hard to access still exists. This is changing quickly, though – the culture is shifting towards a more digital way of working, and this is evident through the willingness to collaborate, share and change, leading to an exciting few years ahead for technology within the NHS.