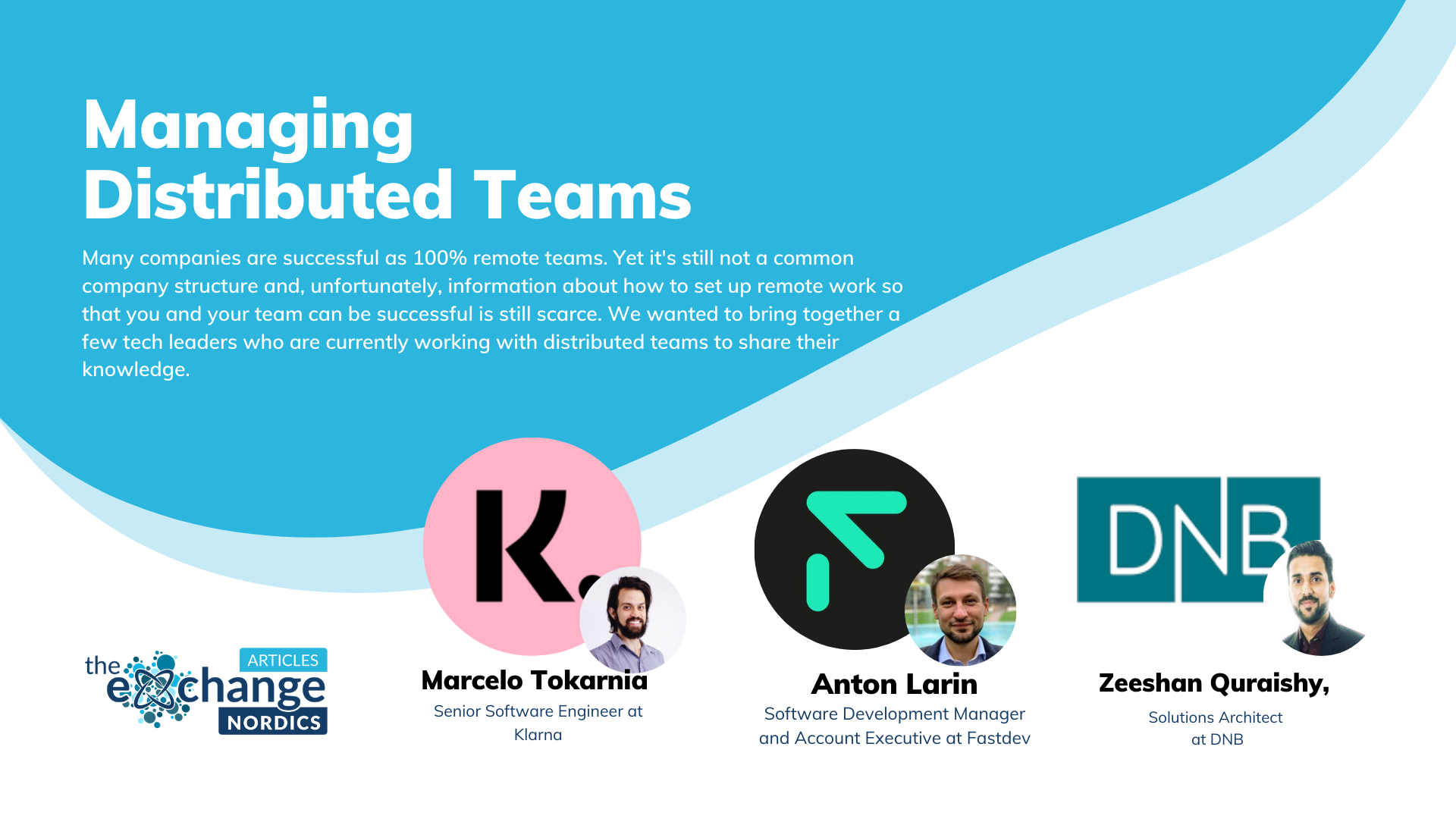 Even before current events resulted in stay-at-home rules forcing companies to shift employees from the office to the home office, remote work was growing in popularity. Many people were choosing a more flexible style of work instead of being in an office from 9-5 each day, and it seems that many companies are thinking that keeping all, or part, of their workforce remote, might be what is in their future.

Many companies are successful as 100% remote teams. Yet it’s still not a common company structure and, unfortunately, information about how to set up remote work so that you and your team can be successful is still scarce. We wanted to bring together a few tech leaders who are currently working with distributed teams to share their knowledge.

Empathy enables you to know if the people you’re trying to reach are actually reached.  It allows you to predict the effect your decisions and actions will have on core audiences and strategize accordingly.  Without empathy, you can’t build a team or nurture a new generation of leaders.  You will not inspire followers or elicit loyalty. Empathy is essential in negotiations and sales:  it allows you to know your target’s desires and what risks they are or aren’t willing to take.

Under the pressures that COVID-19 has brought on working teams of all shapes and sizes, Empathy has only grown in importance. For Zeeshan, who himself has benefitted from empathetic leadership in his career, it’s empathy that has been one of his core leadership methodologies throughout this period.

“We have to understand all the different kinds of environments people suddenly find themselves in, on top of that people may have a lot of worries or fears for the future. So what I started doing was offering my WhatsApp number to everyone on my team. It is something personal and considered casual in a lot of work-environments. I felt like this was a more personable way to contact each other.”

Zeeshan, who has worked with many of the people on his team for many years, feels like this move worked towards the firming of already strong relationships into even stronger ones.

“So we went to WhatsApp to help build an environment where people could just chat and discuss whatever they needed to. Like asking team-mates how they focus or stay productive while working from home as some of them struggled. In a strictly formal environment this would not have been possible as ‘admitting’ to struggle with productivity might be seen as negative, this may lead to anxiety ”

Some People Leave Their Families Behind

We’re told that making big changes in life is invigorating. That exposing yourself to new things and new people is the only way to really get to know yourself. That to grow as a person, you must challenge yourself.

Mostly, in my experience, this is true, but I’ve also discovered that actually uprooting yourself, thrilling as it may be, comes with its own set of challenges.

Challenges that Zeeshan and his colleagues are grappling with every day.

“I know a couple of colleagues and former colleagues who have left their families behind for this opportunity. They can come from houses of 15 to living alone with no one to talk to.”

Having a simple chat with someone, be it at the shops or in a workplace setting, can be a big boost to your emotional wellbeing. For some people, who relocate to work, this isn’t as simple as it sounds. Recognising this in a few of his colleagues and friends, Zeeshan has helped them find language schools.

“Seven of those people that I’m talking about have already enrolled, they got a special discount on the reference. Now they’re learning the local language, their confidence is going up and they’re able to go out with a bit of confidence.”

Onboarding is a crucial part of an employees journey with their employer. For distributed members of your team, who come with their own unique challenges, it’s even more important.

For Zeeshan, who has onboarded new members of his team during lockdown, it’s about levelling the playing field and moving away from master/servant mentality.

“Even a simple ‘How are you?’ can sound like a formal bossy question when you don’t have a physical context. Anyone who is coming into a new team will not always be able to read your vibe even if you are positive. So it’s a good idea to avoid starting talks with work, instead of starting something casual will relaxed them.”

It can be tempting to throw new hires straight into the work, but sometimes holding back can pay dividends. For Zeeshan, those who work with distributed teams have a slight advantage here.

“We’ve just onboarded someone from South America, so before we dive into work I make sure I ask about their situation. This means he can open up, ask me questions   and of course can also teach me stuff. That’s a great way to start a working relationship and it’s absolutely worth the time spent.”

Anton has a team of 10 that consists of developers and DevOps specialists who work on external projects for clients. With a diverse portfolio of clients, Anton and the team at Fastdev have seen the varying impact that COVID-19 has had on the market.

“We work in many different industries. Some have been impacted badly, while others have grown.”

With this growing remit and ever-changing expectations from clients, Anton is always looking for the best talent regardless of location.

You Have to Provide Flexibility

With a team already well versed in distributed and remote work, Anton and his team were able to ride the challenges that COVID-19 provided. For 12 years Anton has worked with teams in different time zones and, for him, the first step for leading distributed teams effectively is in proper time management.

Another important aspect is maintaining regular one to one communication with developers who can sometimes fly under the radar or not want to share some of the problems they’re facing in front of the rest of the team.

“Some developers are introverted. One to one meetings, away from the rest of the team makes sense because they feel more comfortable sharing the challenges they’re facing.”

Of course, remote working doesn’t lend itself to every role and business. More junior employees benefit from hands-on supervision, training and support. Similarly, employees whose work is highly sensitive and confidential should perhaps be required to keep their work in the office.

Anton, who believes that remote working puts an increased emphasis on the responsibility of both the manager and developer, likes to take a more flexible approach to management.

“Sometimes remote work allows you to concentrate better on a single task because you might be able to minimise distractions. But from another perspective, there are situations where close collaboration is required. And to find the solution for some real problem, it is much more effective to be side by side in one office, to look into one screen for example. Finding a balance between the two is important.”

Make It Easy To Find Information

Newly remote workers are often surprised by how much time and effort it takes to actually locate information and find out who they need to talk to. As a manager of a remote or distributed team, it’s your responsibility to make it easy for your employees to find the information they need.

For Anton, who has just come off the back on infrastructure and internal network upgrade for Fastdev, this is especially important.

“We had all the VPNs and Logins generalised so now we have one network for everybody. All the resources are arranged or sorted out in an online portal. This is a must-have if you’re bringing new people on board.”

Marcelo Tokarnia is a Senior Software Engineer at financial services giant Klarna. 2 years into the role, Marcelo moved from his native Brazil to Stockholm in 2018.

With development and service architecture responsibilities, Marcelo is operating in a team of 10 fully remote developers.

“So my role is basically, of course, it’s not just me, but given some inputs on how to organise this whole structure, like, which responsibilities should be from each service? And where should they host them, in order to make the communication between hosts more efficient.”

Working in a highly agile environment at Klarna, Marcelo and his team are working hard on breaking down the various blockers that present themselves while working outside of an office space where information is easily accessed.

“So the main point of this first meeting, and the most important meeting of the day, is that everyone is aware of everyone’s situation. And if you’re able to help you raise a hand, if you’re not able to help, maybe you know someone who is and say, I’ll talk to this person or that person, or I had this problem before, something like this. Yeah. So I guess the main focus is to unblock people, so they can be as productive as possible.”