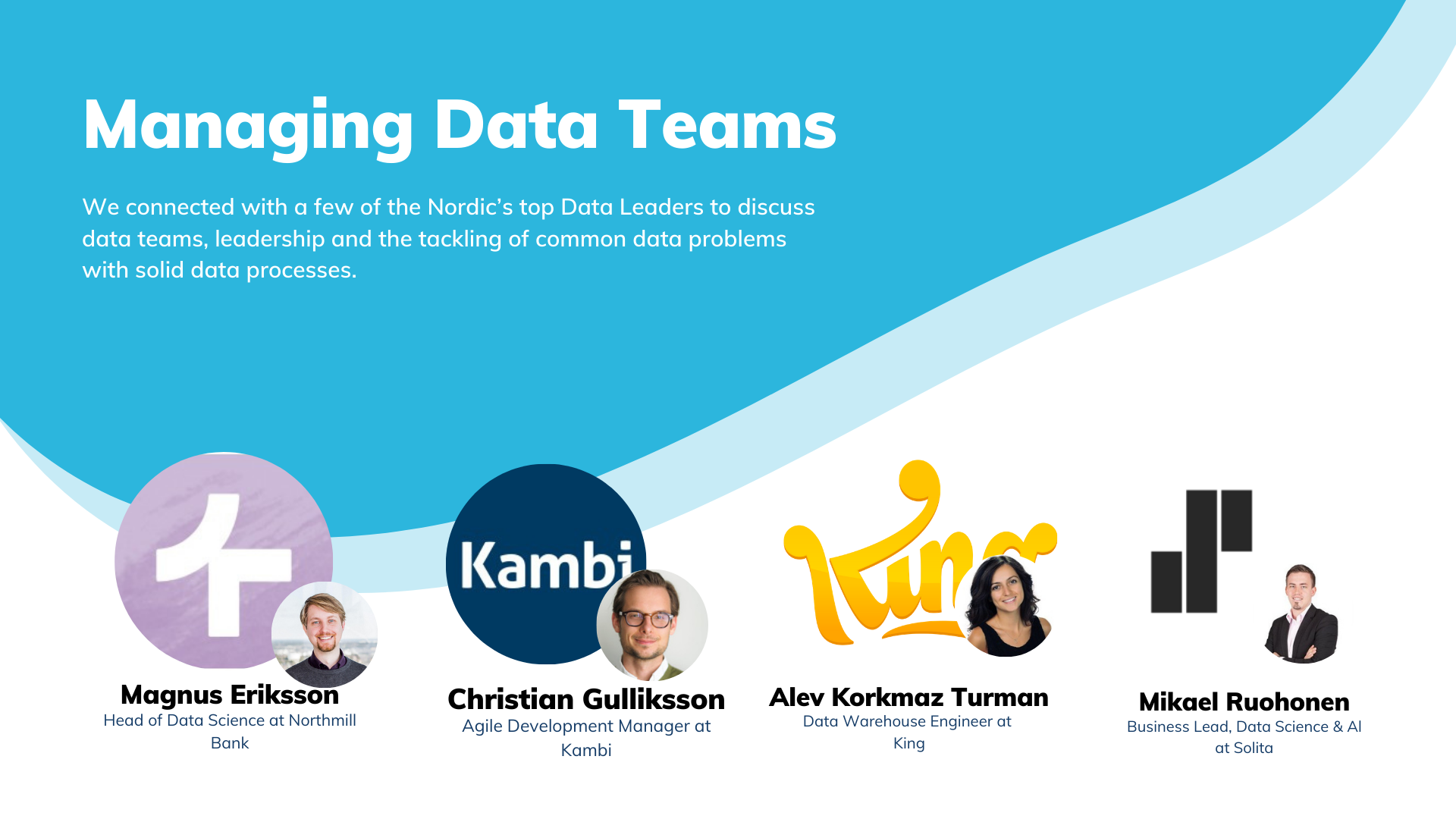 Data is the oil of a digital age. How many times have we heard that? Despite becoming a bit of a caricature, Data is a massive industry that is only going in one direction: up. And despite the pandemic putting the breaks on many industries growth plans, data, on the other hand, has only had its importance highlighted with smart, remote working becoming mainstream.

We connected with a few of the Nordic’s top Data Leaders to discuss data teams, leadership and the tackling of common data problems with solid data processes.

Magnus Eriksson is the Head of Data Science at neobank Northmill Bank. Before joining Northmill Bank, Magnus was at the games publisher and developer Paradox Interactive. It was here that Magnus started to drive data-driven cultures.

“I joined Paradox with a mission to foster a data driven culture. So going there with the mindset of improving conversion rates, and working with progression funnels wasn’t always easy – but exciting.”

After sharpening his skillset further at  Paradox Interactive, while fulfilling a childhood dream of working in the games industry, Magnus moved on to join Northmill Bank with a mission to create a tailored, relevant and intelligent banking experience. His first order of duty was to restructure the data function at Northmill Bank, which was initially one big team that had responsibility for credit, analytics and data science combined.

“We’re now broken up to smaller more focused teams with my team being responsible for the data science part, which means predictive modelling and complex in depth analysis.”

Around Magnus’ data science team are a number of other teams. The BI team works with descriptive analytics and helping colleagues make better decisions. The Data Engineering team is responsible for most of the heavy lifting and data infrastructure. And the Credit Risk team, responsible for the credit business and analysis, sits independent from the rest.

“And that set up is super important for us to be as efficient as possible in our work.”

Technically, Northmill Bank is completely cloud based – using AWS and Redshift while working towards a migration to a Snowflake solution that Magnus believes will give the team higher scalability as they look towards the future of Northmill Bank’s analytics function.

Currently, the data engineering and BI team at Northmill Bank are focusing on creating the infrastructure that will enable their distributed teams to make analysis on their own. Magnus, whose role is going to remain specialised, will continue to provide support on a ‘use-case’ basis where he will be tackling the most pressing data-related questions that drive the most significant business value. Siloing off the more important aspects of the data team is something that has been driving value for Northmill Bank.

“Right now having this predictive modelling power and in depth analysis in one place is something that is good for our learning and development. And of course, brings true customer-value in the end.”

These solid processes and clearly defined functions have helped Northmill Bank’s teams through the COVID-19 pandemic. With a completely cloud-based architecture and their infrastructure fully integrated into G-suites, the only challenge Northmill Bank’s team ran into while working remotely was an abundance of tabs.

“The existence of really robust, tried and tested work processes have been instrumental for us. We only became a bank a year ago so it’s especially important that everything stays stable and sturdy.”

Managing A Data Team While Remote

It doesn’t matter how robust your processes are, people are still people and they come with a diverse range of challenges. For some, these challenges are amplified while working remote. For Magnus, overcoming these challenges starts with looking for the right mentality while recruiting.

“Teamwork is a pillar for us. It’s our mentality. So when it comes to full-scale home working and those feelings of loneliness start to creep in, we’ve got that culture that allows us to be open and communicate the way that the situation requires.”

This culture has paid back in dividends as Magnus’ team has been able to hit the ground running while working remote. While writing more lines of code per day than they ever have from an office setting, Magnus still believes there is more value in the little bits of discussion that happened in a joint workspace.

“You get ideas. Those little discussions. So even though we’ve been productive in one sense, we don’t know what we’re missing out on with the teams being apart.”

Kambi are scaling rapidly following an initial downturn at the start of the COVID-19 pandemic when all sporting events were put on hold. New operators and customers are coming in on a regular basis and, internally, Kambi has a significant number of development teams. Each of these teams and operators are, in some way, using data. Demand for data has never been higher, making the importance of scalable systems and empowering consumers all the more important.

“Bottlenecks are occurring at this level and, while also investing in new team members, we need to work on a more scalable system that empower the teams to be able to manage their own data and analysis.”

This will place Christian’s team in more of a facilitator role which will allow them to focus on the larger, business-critical data questions, while still being able to provide support to the teams where needed.

Creating an ‘Around the table’ Approach to Meetings

With an incredibly passionate team of outspoken individuals, agile ceremonies in Christian’s team can quickly become quite high energy. As the data team moved remote, one interesting learning Christian obtained came in the form of how they manage meetings.

“Remote working unexpectedly helped us control our discussions and helped us focus and listening to each other. Now we have an ‘around the table’ approach during meetings clearly deligating the word. I recall after the first retrospective, we went around the group to ask, okay, what was your experience with this? Almost everybody said that, oh, this was better than anything we’ve had before.”

For Alev, who worked closely with her data engineering team on a daily basis, communication has been more important than ever.

“We are communicating almost every two hours through Slack, on top of our twice weekly meetings. It’s important we communicate so we can make requirements clear as well as make sure we, as a data team, are responding well.”

Despite feeling like the remote working situation affords her more flexibility, Alev believes the office space provides more options for innovation and impromptu discussion – which are key for data modelling.

“You know, sometimes I want to discuss data models. I want to see if there is anything I haven’t considered. Normally, i’ll just stop what i’m doing and wander over. That kind of thing doesn’t come naturally while you’re at home on your own.”

The Definition and Ideation of New Ideas is Challenging

Mikael Ruohonen is the Business Lead, Data Science & Al at Solita. We spoke to Mikael while he was in his previous role as  Head of Data, Data Science & Analytics at S Group, which is a customer-owned Finnish network of companies in the retail and service sectors.

With a team of around 20 data engineers, data scientists, analysts, and product owners, Mikael was responsible for the Data and Analytics especially related to customer, marketing and digital analytics for the group. His last project before leaving for Solita was a migration project from on premise set up to a cloud based, AWS/Data Lake platform.

Being in retail, Mikael has overseen during past years and especially during COVID-19 a large refocusing of efforts towards digital services, webstores, and digital marketing. Business stakeholders want new reports and analyzes that they’ve never asked for previously while digital service development has increased demand for new data and personalisation services, on top of existing ones, utilized especially in webstores. This all has created a rather different few months for Mikael and his team.

Under Mikael’s supervision there exist multiple services each with their own teams and their own daily and weekly meeting channels. These meeting channels, which had traditionally been mainly facing to face in the office, moved to be remote almost overnight. Even though the teams have been quite well equipped for this exceptional time, online meetings have caused some difficulty around anything other than business as usual progression.

“The design or definition or ideation of new concepts and new projects. That’s definitely harder. ”

The Importance of having Data Processes in place

For Mikael, having clear and established data processes set up was key to their current advantageous position.

“When COVID came, there was a lot of new request and ideas thrown around – for instance, new quick additions or tests to recommendation engines used by our web stores that would hopefully generate even better results. It could’ve been a nightmare for us on the data engineering & science side to do this rapid iterative further development. But because we had our data platform, machine learning pipelines and testing capabilities set up and thought through in advance we were able to support this increased demand rather easily.”