Launching Your Career in Tech – Advice from Nordic Tech Leaders 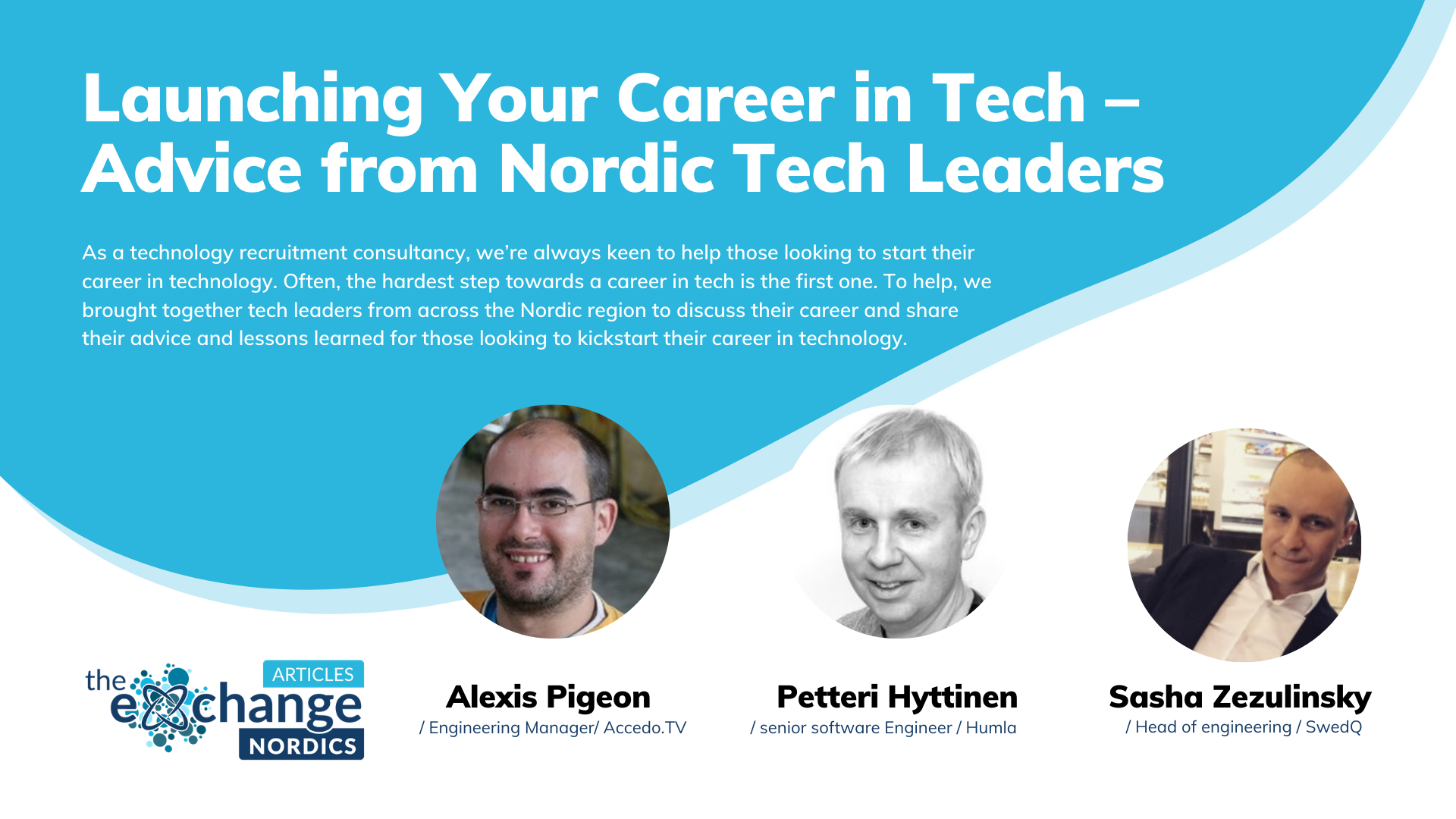 As a technology recruitment consultancy, we’re always keen to help those looking to start their career in technology. Often, the hardest step towards a career in tech is the first one.

To help, we brought together tech leaders from across the Nordic region to discuss their career and share their advice and lessons learned for those looking to kickstart their career in technology.

Alexis Pigeon is an Engineering Manager at video streaming technology company Accedo. With a team of 10 engineers that bring different skills and experiences from all around the globe, Alexis is driving a culture of innovation.

Joining Accedo as a developer within a small development team. As the company grew, so too did the development team with Alexis, being the most senior member, taking on management responsibilities. Alexis’ route to management is testimony to how we don’t always know what we can do until we’re doing it.

“I always thought of myself, someone who, who would go into the typical principal software engineer kind of path or solution architecture. I never thought of myself as a people manager. It’s grown on me a lot. I really, really like it.”

With his hands off the code, Alexis spends 50% of his time managing his team and the other 50% working with customers as solutions architect.

“Im still assessing technically or assisting technically our customers to design their technical solutions with all different partners and making sure that what we build is going to be technically feasible, robust enough and future proof.”

With Alexis’ wide portfolio of achievements and skills, we were keen to ask him what advice he had for someone looking to launch their career in technology.

Don’t be Afraid to Move

Alexis will be the first to admit that his path to Engineering Manager isn’t a typical one. Going into development and choosing early in your career that development is not the end of the role and wanting to pursue more management duties is not a path walked by many.

“Giving things a try doesn’t cost anything.  Don’t be afraid of taking risks. There is room for failure. Failure is way more accepted in it than it is in in other sectors. So go there, make big mistakes, change country, I mean, I’m the first one advocating for not living in your own country, but be bold and pack your stuff and move around.”

It’s a common misconception among more junior professionals that big companies can provide big experiences, big skills and big achievements. While it may be true that having a big name on your CV is impressive, employers worth their salt will be more interested in what you achieved in that role and the size of a company can put up barriers to achievements.

This was something Alexis experienced when he worked for Capgemini earlier in his career.

“I was working for four years on the same project that had started already when I joined. And that had not been released yet. When I left four years later, it was still under construction.”

With many different stakeholders at all different levels, big companies are usually less agile and achievements or experiences you could get in the first 6 months working at a leaner organisation can take years at a larger company.

But, as Alexis is quick to remind us, those years he spent at Capgemini were certainly not wasted as he moved into all future roles with that experience and knowledge.

“The politics game is tough. I mean, you need to be friends with big bosses to get progress then if you’re not in the good team, if your manager, for example, has issues with his own manager, then the whole team isn’t going to get any evolution. So that’s, that, I got quite tired  of it.. It’s not a mistake, but it’s a regret.”

Petteri Hyttinen is a Senior Software Engineer at Axel Johnson. After working as an IT consultant for many years, Petteri then focused his development with working with iOS & Android.

“I’ve been Yeah, in the IT industry quite a long, but also, I have a past career as working in manufacturer in the industry as well. I worked at Scania trucks.”

Technical skills are going to change over time. The tech landscape can change in a matter of months and thus the skills that folks have today could be outdated next month.

To be successful and evolve in your career you need to be able to adapt to these changes. Stay curious about what is changing and why. That curiosity enables you to jumpstart your own learning.

Curiosity isn’t about only being curious or interested in the new emerging technologies. It also means you are curious to understand the why behind a feature, bug or support issue you encounter.

“Be curious. Like when you’re working tech. It’s not just the job is like you have to have a genuine interest in it to be good at it. Yeah. If you’re not don’t, then you will be obsolete.”

Sasha Zezulinsky is the Head of Engineering at software and development consultancy SwedQ. An industry stalwart since 2008, Sasha has been working as a software developer and a consultant . He came to Sweden 7 years ago where he joined a Blockchain and Bitcoin Mining startup KnCMiner.

“That was the most interesting offer I got. We built three Bitcoin mining data centers in northern Sweden, and we used hydro power plant to consume green electricity. And that was very big in Europe actually, we had 12% of a total bitcoin network hashrate, but suddenly the company declared bankruptcy in 2016.”

After that Sasha switched to consultancy working with companies like  Spotify, Scania and G-Loot.

We live in a fast-paced, quickly adapting and progressing world, and this is particularly true of the technology industry. Few industries move at such speeds and drive fundamental changes impacting all industries, as that of technology. Keeping up with technological advances, improvements and ultimately positioning yourself at the forefront of such advances can be extremely difficult, but at the same time is vital for career success.

Having someone to help you navigate the waters and guide you towards safer shores is a point that Sasha was keen to raise when he asked him for advice for those starting their technology careers. After finding a mentor through his programming classes, Sasha was able to kickstart his career.

“Mentor taught me , we worked on a small project together and  did pair programming sessions  that helped a lot. There are people who can learn themselves. But I think it has its advantages and disadvantages. It’s good when there is a stone, but someone makes you a diamond.”

Don’t be Afraid of Failure

Have you ever been so afraid of failing at something that you decided not to try it at all? Or has a fear of failure meant that, subconsciously, you undermined your own efforts to avoid the possibility of a larger failure?

When Sasha made the decision to move   to Sweden, he was taking a chance that risked failure. As it happens, the start-up he joined did file for bankruptcy and Sasha was left looking for new opportunities.

“ I do not regret my decisions. When children learn to walk, they fail. I have many success stories, but from a negative experience we learn the most.   ”