Launching Your Career in Tech – Advice From Experts 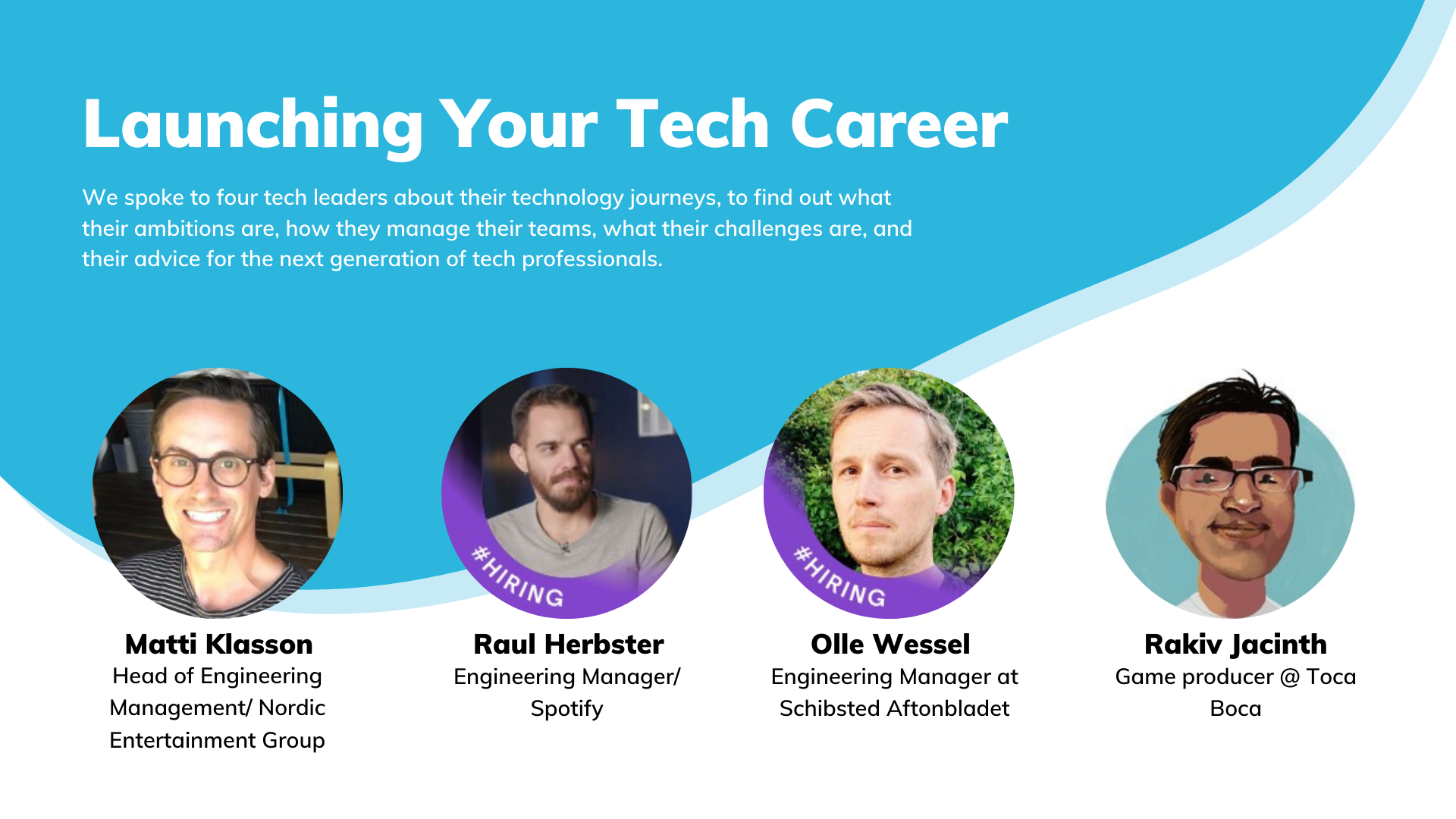 The tech industry is continuing to grow quickly, with AI, big data and machine learning ensuring that there will be continuous growth for the sector for many years to come. It is an attractive industry to join, with the potential for huge rewards.

We spoke to four tech leaders about their technology journeys, to find out what their ambitions are, how they manage their teams, what their challenges are, and their advice for the next generation of tech professionals.

Matti Klasson is Head of Engineering Management at Nordic Entertainment Group. His passion for technology began as a child, when he and a friend would use simple books of programming language to programme their own games. His first job in the tech industry was with Tele2, where he enjoyed a learning environment which really set up his career.

From there, he moved to one of the biggest sports betting companies in the world at the time, bwin Games. Here, he was able to work in a truly agile environment, encouraging communication between developers and operations personnel to create outstanding products.

Following the dismantling of the online gambling industry in the US, Matti moved to King in 2013. In this role, he was able to use the knowledge he had gained to creatively build environments for development teams to thrive, through the implementation of a dev manager role to support the teams.

“Who takes care of your personal development, who takes care of what you as a developer needs, when it comes to grow and thrive in your role and be part of this team. So we introduced something we call the dev manager. The dev manager role was at that time developer that had an interest and was passionate about supporting and helping other developers.”

In his current role at Viaplay, Nordic Entertainment Group, Matti is tasked with expanding to Europe, growing the user base and growing the teams, through overseeing 12 cross functional, autonomous teams.

This role comes with some unique challenges, in particular finding the right balance between cross functional, autonomous teams and supporting structure around the teams.

“It’s easy to say, ‘Yes, we should have cross functional, autonomous teams.’ But if you don’t set some guardrails, some guidance for those teams, it could be hindering the team to be successful, because the boundaries are too loose.”

The key to a successful tech career is finding your passion, and for Matti that is leadership and bringing the best out in people.

“I really like to talk to developers and understand their challenges and problems and how I can help them to remove them, so they can thrive and develop and grow in their roles.”

Success as a leader in the technology sector comes from knowing that you will never have all of the answers. It’s important to get teams into a position where they have the information they need to make the right decisions – even if the answer they come up with may be different to the one that you had.

“Don’t manage people, manage the system. It’s about managing the system and environment around those things, because people can manage themselves if they have the right conditions.”

Aside from this, it is also important to set boundaries, to ensure that the team continues to thrive, grow and knows where to navigate.

Listening to your team is also an important skill. Although it is tempting to implement new procedures and technologies that you are sure will work, it is vital to get feedback from your team, because what suits you as a way of working may not suit the people who report to you.

Raul Herbster is an Engineering Manager at Spotify. As a child, he was always interested in mathematics, and this led him into an education which focused on engineering. He studied his masters degree in Brazil, and later embarked on a PhD in Germany. His career has always involved working with embedded and mobile systems, and has been a part of the evolution of mobile, from the first operational system with Nokia to the complex Android and iOS products today.

At Spotify, Raul has worked with mobile infrastructure, mobile architecture and experimentation. A large part of his role is empowering the developers on his teams to make their own decisions to avoid damaging productivity.

Raul has been in a position to see the growth of Spotify from a small company with the feel of a start up to the global organisation it is today. He began as a senior software engineer, and soon made the leap to engineering management.

“I always had this belief that I felt like you can do a lot, right. But together, we can go further. I always like trusted the team in unity to go further.”

Raul has always had a guiding hand towards others in his team and when his mentor noticed this, it was suggested that he look at becoming a manager himself. The role suits his skill set perfectly.

Connection is the core value

The pandemic has brought many challenges, not least to Raul’s team. Managing the difficulties of working from home and leading a remote team has been a struggle for many.

“Last year, people thought this shall pass soon. And now that we are in the second year, I believe that those things a bit harder. The challenge is to motivate people and to keep people motivated to their best, while being understanding about all of the challenges that we’re facing right now.”

The key to successfully managing an engineering team through a time like this is through focusing on belonging. The complex engineering problems which appear day to day can be managed through the processes, training, and planning already in place, but to keep the team connected and happy it is imperative to create a sense of belonging.

Raul’s advice for those planning to embark on a career in the industry is to always be aware of what is happening, keep your finger on the pulse of new technology, and don’t only stick to one particular technology. It is important to be flexible and open to learning new things.

“When you learn other skills, you see problems in a different way. You can track improvements in different way, you can see if your solution’s really working, you can have a big impact.”

Olle Wessel is an Engineering Manager at Aftonbladet . He studied computer science at university, and has been a developer and consultant since 2007. In 2013, he began focusing on agile development and learned about Scrum. This was a complex development process, and Olle had to prove his strength and skills in the area to fully succeed.

In 2015, Olle and a friend started their own company, developing regulatory software for the financial industry. This was an interesting and exciting experience, though after a year Olle went back to consulting.

Now an Engineering Manager, Olle is deeply involved in the work of his teams, both participating in the new projects and keeping an overview of what is going on.

“I have the helicopter pilot’s perspective. Where we have new features and new projects coming, I’m deeply involved. But so as soon as we start with it, I leave it a bit, because then developers are on it.”

Olle’s passion for tech is how the technology can work for the user. The part of the role that he most enjoys is considering the end user, and ensuring that goals are aligned to produce a result that has a genuine effect on the user.

Discover what tech means to you

In order to be successful in the tech industry, it is important to consider what you enjoy about tech, and where you want your career to take you.

“You need to have relationship between you and the tech itself. You need to place yourself in regard to the tech, what do you want to do? In the beginning of your career, you might not be aware, but maybe after one or two years, you are thinking, this is kind of interesting, I want to go this direction, then go that direction. Because it’s easy for you to stay too long in an area that doesn’t really interest you.”

For a satisfying career it is a valuable task to set goals and consider where you really want to be. This helps to ensure that you don’t stagnate in one place, but instead keep developing and growing in your role.

Rakiv Jacinthe is a Game Producer at Toca Boca. He has been active in the gaming industry for close to eight years, and started out as a Game Developer at King. There, he worked with mobile games before moving into producer roles. In his current role at Toca Boca, where he has worked for a year, he leads two different gaming teams.

Rakiv has been interested in game development since he was young, but during his studies he found that he also has a passion for leadership.

“Even during my engineering studies, I was quite interested in project management leadership area already. For many of the projects during my studies, I was appointed or volunteered as a project leader. So that became more natural thing for me to do later on, as well. Joining the industry, as a developer, I realised that there’s a lot you can do or add as a producer or a product leader, if you have a technical background.”

As with many who move into a leadership position, Rakiv has always enjoyed the technical side and has found it to be extremely beneficial to have this technical background when leading projects.

In his current production role, the switch to working from home has been a challenge for Rakiv, as it has been for many others. The informal interaction has been missing and it is something that he is keen to bring back to his team as soon as possible, through the implementation of a room that is always on and available for non-work related get togethers and chat. Aside from this, he is looking forward to moving his team to a hybrid way of working, where creativity will be able to flow more easily.

Make sure you have fun

Although he enjoys his role and is happy managing teams, there are elements of development that he misses.

“I do miss several aspects of being a developer, like seeing immediate changes or contributing to a project immediately. That’s something you don’t have as a leader. Because everything you do usually takes time to roll out or get results, compared to when you code, you compile and build, and you get the results within a couple of minutes usually.”

Some of Rakiv’s biggest achievements to date include being part of the team that launched Candy Crush Jelly Saga and seeing the sheer scale of success following the roll out, an accomplishment that he is even more proud of when considering the small size of the team at that time.

For anyone considering a career path in technology, it is important to have fun. This also helps when dealing with any issues at work, and makes working days a joy.

“That’s been my entire guiding line, throughout my career, just to make sure I continue to have fun.”