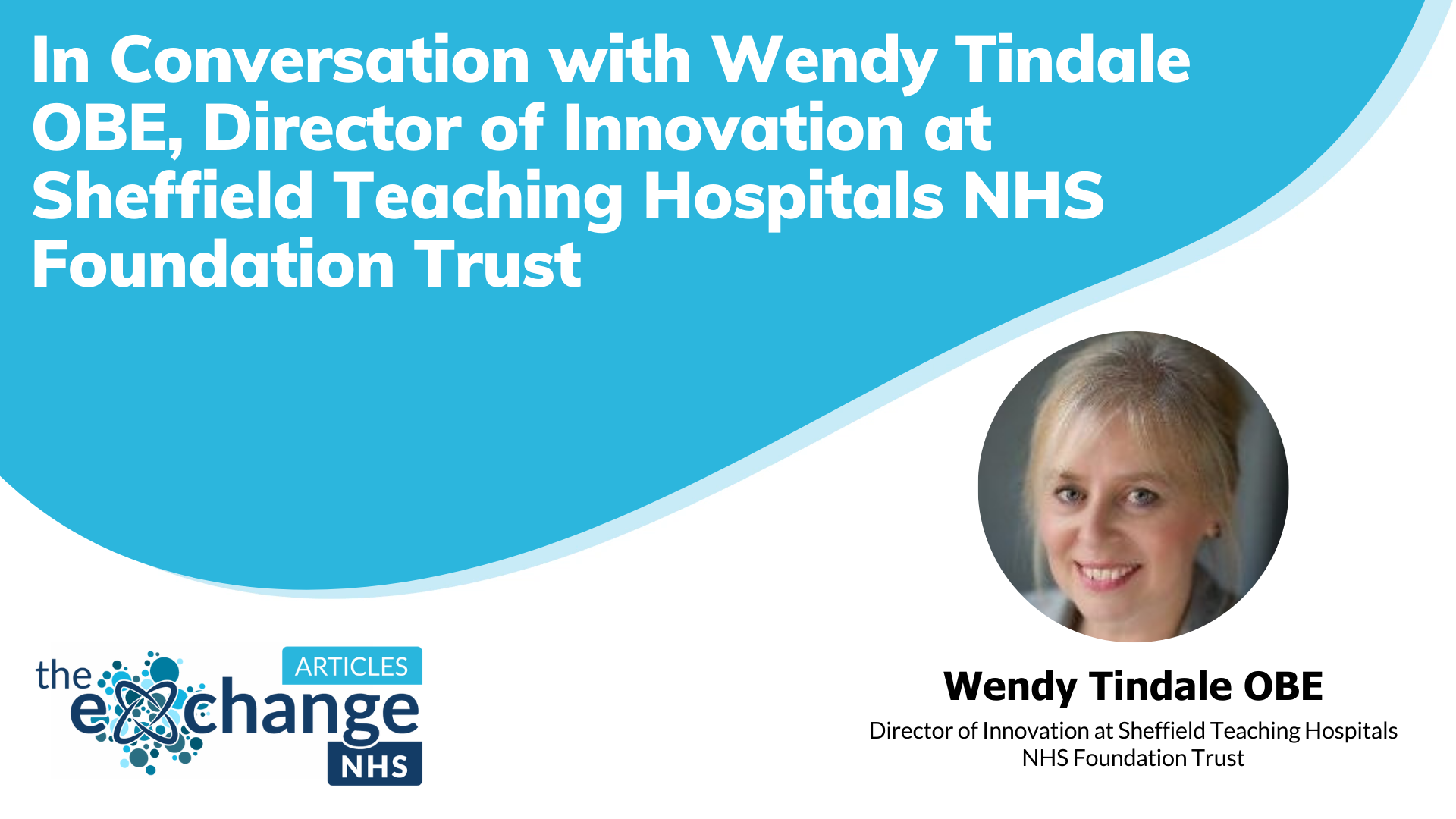 We spoke to Wendy Tindale OBE, Director of Innovation at Sheffield Teaching Hospitals NHS Foundation Trust to discuss her career, women in STEM and the importance of continual development.

Wendy’s story is part of a series of articles highlighting the careers of female tech leaders. We’ve brought together these stories in an effort to prove that the route to leadership is never a straight line.

Wendy is the first to admit that her route to her current position wasn’t a standard one.

With an initial drive to be a Clinical Psychologist, Wendy studied psychology at University which, she admits, was not the right subject for her. Inspired by a friend, Wendy decided to make the change to Radiography. Visiting a Radiography Department at one of the local hospitals, Wendy met the Professor of Medical Physics who had a vacancy open. Jumping at the opportunity, Wendy joined as a Junior Technician.

“I didn’t finish my degree, I went straight into medical physics.”

After a little while, Wendy could feel herself getting disillusioned. She was the most junior technician on the ward and was, pretty much, dedicated to menial tasks. Rather than packing it in, Wendy applied for a day release and worked towards a higher national certificate in applied physics at Sheffield Polytechnic.

“I was with loads and loads of lads from the steelworks. I was the only one in my field, it was absolutely brilliant. And I did sufficiently well in that, that I was straightaway offered a place at Leeds University again, part time doing a master’s degree in Medical Physics.”

Working throughout this process, Wendy combining new knowledge with hospital experience. After finishing her master’s degree, Wendy was offered a job by the new Head of Medical Physics which granted Wendy her own research team to look at the development of artificial heart valves.

“It was a very niche field. It led to national and international recognition. Our network was massive and it was a real stepping stone for me. But the funding was always on a short-term basis and I needed a bit more stability.”

Coming back to the NHS, Wendy took a position in the Medical Imaging area, leading the research but also gaining management and leadership experience. Again, this afforded Wendy national recognition and, as a result, she was offered a place on a number of committees, given the opportunity to represent professional bodies and even offered her own editorial role on a national bulletin.

When an opportunity came up to apply for a Professorship in Medical Physics itself, Wendy leapt at the opportunity. For 15 years Wendy remained in this position until she joined Sheffield Teaching Hospital as the Scientific Director. More recently that role has expanded that to include Director of Innovation responsibilities.

“The scientific director is focused on leadership in medical physics in clinical engineering, and having a scientific role in medical imaging. And the innovation role is a bit more corporate, if you like, about leading innovation on behalf of the organisation.”

During this series, I have spoken to many highly qualified ladies who are often in the minority when they down at a meeting. This can be an uncomfortable experience that never seems to get easier.

For Wendy, who has earned worldwide acclaim for her scientific and often sat down at tables dominated by the opposite gender, her reaction largely depends on the circumstance.

Spending her entire career in scientific circles, Wendy has seen both sides of the coin. In her early career, Wendy used to send her initial correspondence out as Dr W. Tindale to avoid any initial prejudice.

“What I wanted to do was to get to the situation that by the time people had corresponded with me, and then met me, and they’d already got an assessment of what I was capable of and that was independent of my sex.”

Although a shame that it came to this, it certainly stands as a testament to both the time that Wendy was working in and also her resourcefulness. Hilariously, it even resulted in some occasions where people struggled to contain their surprise the W stood for Wendy and not William – much to Wendy’s enjoyment.

“We are seeing a lot of our trainees that are coming through the medical physics and engineering routes now being female.”

Continual learning and development of self is a common theme throughout the careers of those I speak to through this series.

For Wendy, who’s career moves seem to motivated by self-development, that ‘never-stop-learning’ mentality is key to her success.

“I think when you’re in a scientific or technical role, you have to make sure that you’re keeping up to date with things because the world changes so much in our area.”

In technology, and in science, the next best thing is always around the corner. Continual learning is part and parcel but, for Wendy, that needs to be balanced with a drive to create the best possible impression.

“You need to maintain your credibility. I like to prepare as best as I can so I can create a good impression and be sure that people see me as credible.”

Although perhaps more applicable to scientific circles, there are lessons here for everyone who wants to work towards business change and development.