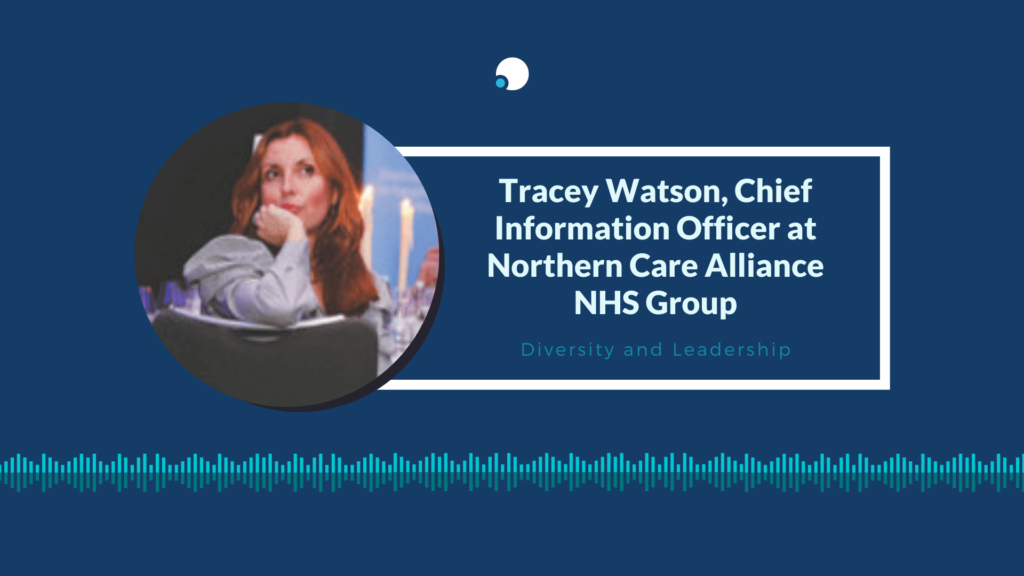 Tracey’s story is part of a series of articles highlighting the careers of female tech leaders within the NHS. We’ve brought together these stories in an effort to prove that the route to leadership is never a straight line.

“I Did It The Other Way Around”

Starting her career as a graphic designer, Tracey moved into the civil service on a graduate scheme which put her on the path towards Health Tech.

“My move into Health and Tech was accidental, driven by personal needs and geography. I was based in London and my family were in Leeds, I needed to move back North as my mum was terminally ill. I accepted a secondment at Connecting for Health (NPFT Programme) and headed up the commercial teams looking at National Infrastructure like SPINE, ERS, GPES etc”.

Since then, Tracey has worked various national jobs before moving to NHS England as an SRO for a number of high profile digital initiatives such as Digital Primary Care, NHS Choices, now NHS.UK.  She then became the Innovation and Partnership Director at NHS Digital.  Within these roles she was responsible for key national strategies but was conscious she didn’t possess a working local knowledge of the digital challenges the NHS faced.

“At the time, I felt that I was doing all of these big jobs in digital and didn’t really have an awareness of what was actually happening on the ground. I moved into a local CIO role to address those demons, by that I mean learn something locally to then do a more informed job nationally”.

This was Tracey’s motivation to move to the Northern Care Alliance. An untraditional route, but one that was filled with learnings and experiences that have made Tracey the leader she is today.

“I’ve always made moves to areas that have big problems”

Tracey, who has made a habit of moving to areas in both central government and now the NHS that requires wholesale change or transformation with complex environments to navigate.

“Transformation really makes me tick, I love strategy work, problem solving and that’s the value I think I bring to the table. And the problems all tend to follow a very similar pattern, insufficient funds, capability gaps, bureaucracy, complex landscapes, commercial resistance and a range of  stakeholders”

For those who may be encountering these problems first hand, or those who like to dive headfirst into these challenges, Tracey recommends staying true to a resolute mentality.

“It’s all about building a belief system that nothing is insurmountable, don’t become too overwhelmed with the ask. Taking the issues or the challenges bit by bit, dealing with them incrementally and recognising that nobody has superpowers. We’re all human. So it’s about not being afraid to reach out for support if and when you need it and don’t be afraid of delivering bad news, its best to be completely open about problems and issues, rather than burying bad news. Sometimes that’s really difficult for leaders, given the pressures they deal with on a number of fronts”

For Tracey, this belief system is key to overcoming issues that plague many female leaders: imposter syndrome.

“It’s about being able to embrace the fact that you’re not a complete leader. The best leaders understand their strengths and their weaknesses and are all about building a capability that can fulfil the task.”

This vulnerability in leaders is an important part of building teams and relationships within them. Without an honest understanding of what you bring, you will never be able to help others realise what they provide.

“When I first started at PAT, I was really honest with the Trust about my career history, what I have done in the past, where my strengths lie, and how I was going to rebuild the Digital Operation and plans for future strategy.”

“Work Hard on Understanding the Terrain”

For those looking for a technical leadership role within the NHS, Tracey recommends being clear on what it is you want to achieve and then understanding the lay of the land.