In Conversation with Tanya Pankhurst, CCIO at University Hospital Birmingham 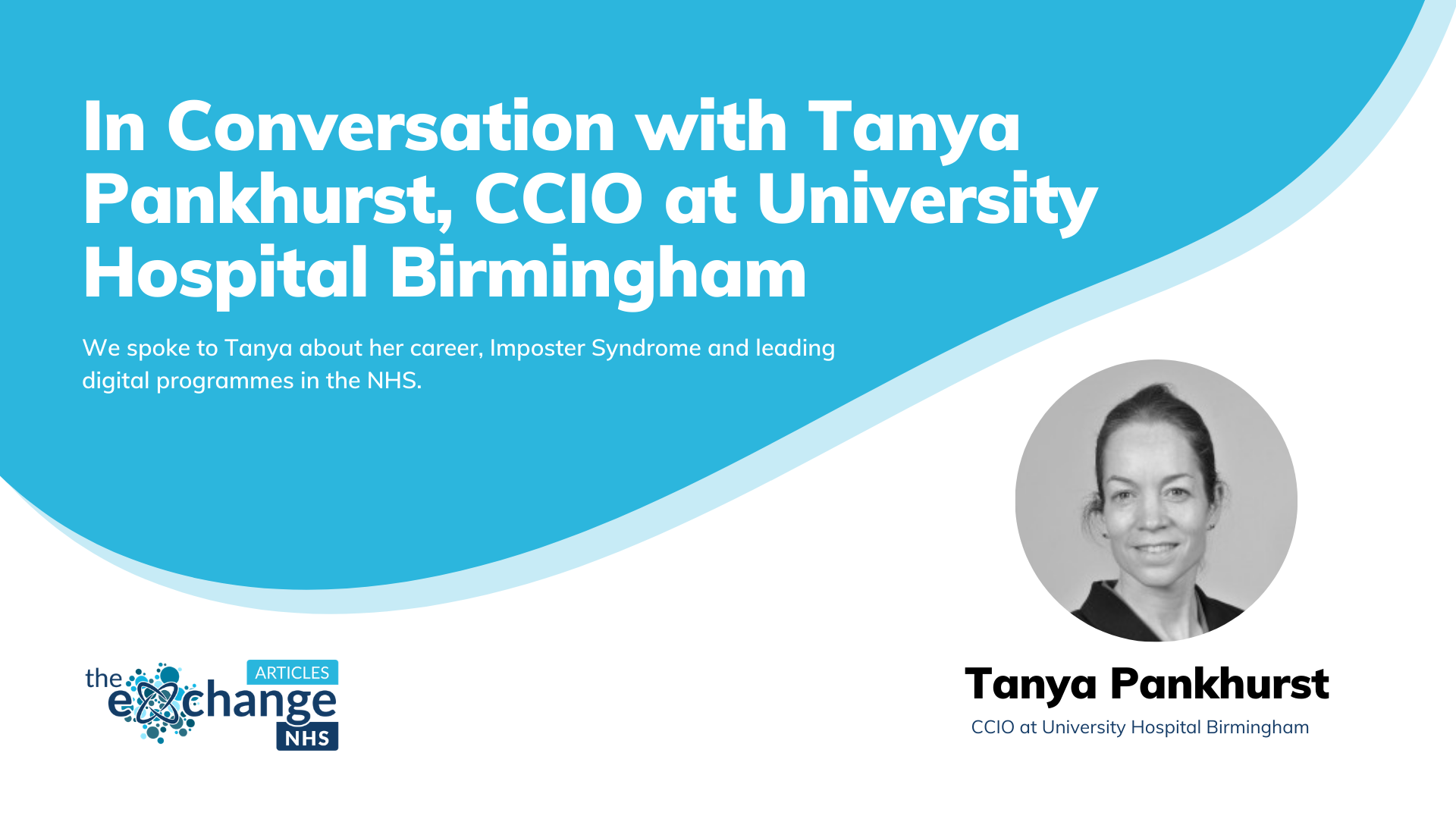 Tanya Pankhurst is the Chief Clinical Information Officer at University Hospitals Birmingham. With half of her role being that of a traditional doctor with clinics and on-call responsibilities, Tanya brings an important clinical perspective to the development of digital and clinical systems at UHB.

Buying some systems and building others themselves, Tanya helps safeguard these projects by providing clinical leadership on those systems by coordinating a range of different clinicians to have input and oversight on the development of these systems.

Digital Before it was Cool

As a Junior Doctor, Tanya had the opportunity to work with clinicians who can only be described as digital trailblazers. One particular Clinician, who wanted to work on easier ways to audit and track patient care, collaborated with university friends to build clinical systems. Tanya, while on her morning rounds with this Clinician, got the chance to work closely with the programmers as the project launched in Renal – Tanya’s specialty.

“We just built it. There was no massive governance issue or anything. We built the system and started experimenting with constant feedback.”

The Clinician who inspired Tanya was a hugely influential figure in the Trust who lead the project with flair and endeavor along with an Aneasthetist called David Rosser, who is now the Chief of UHB.

“It’s incredibly to see that these individuals who championed digital very early on have now taken it and spread it throughout the entire Trust. We’re basically building a really excellent electronic health record that’s being built within the NHS, by the clinicians for the services of all our trusts now.”

With Tanya approaching the end of her PhD and beginning her research as a Registrar, she returned to Clinical Medicine where, part inspired by her time on the original build and her time spent with another influential figure in the form of Simon Ball, Tanya decided to focus on Health Data.

When the time came for Tanya to apply for consultancy, it was clear that an Electronic Patient Record wasn’t going to be delivered by the National Programme, Tanya and the team at UHB decided to jump in with two feet on the build of their own EPR that had been running in the background. With Simon Ball as the Director of Digital Systems and Dave Rosser as the Medical Director, it became clear that someone was needed with dedicated time to clinically lead the build. Tanya, after a round of successful interviews, secured the position and started doing her half clinical, half digital job. Since then, the programme has expanded.

“We’re all hands on deck, a proper EPR. And then all the surrounding parts of the digital programme, the research side with the data, all the other systems that we buy, build, and integrate, have all just become part of my portfolio, and the portfolio has got larger and larger as we’ve moved forward.”

Part of a massive programme with a variety of different stakeholders from the very beginning, Tanya is adopting an inclusive leadership style as she continues to drive digital transformation at UHB.

Despite the need to be remove some of your own personal feelings from programmes that can sometimes suffer setbacks, Tanya has never lost her values around inclusivity as her porfolio has grown and grown.

“It’s about hearing the quiet voices, as well as the ones that are shouting. Many of the quieter ones have extremely deep experience and have a lot to say, but you have to make sure that you give them space to say it.”

Agreeing with Katie Squire’s principles of doing good by people, putting respect first in programmes and bringing people along with you, Tanya is shaping her leadership style up for success not just in the delivery of successful programmes but in the positive relationships she’s forming along the way.

When starting any new role, the rate at which you pick up new information is massive. Oftentimes, this massively steep learning curve can result in some people staying quiet while they try their best to soak up the knowledge.

For Tanya, this plays into what many call ‘Imposter Syndrome.’

“I’m not the kind of person who would start pretending that I know things that I don’t know. But I would remain quiet. And I feel in the last probably year or two, that I have lost that feeling of imposter syndrome now that I know my space that I’m working in much better. And I would be much more confident to say, I don’t understand that, or I don’t think that that’s true.”

For Tanya, who doesn’t sit on the board, it’s very important that she builds positive relationships with those who do.

“Seeking championship from somebody in a higher position than you is crucial not just for your own success but for the success of the programmes you’re trying to deliver.”

Tanya, who works very closely with the Ops Managers who are on her level in the organisation says this has been really helpful to keep ideas fresh.

“I’ve talked to lots of CCIOs around the place who’ve taken that model on because they understand the power of that. And we’ve done that for doctors, nurses, allied health professionals, pharmacists, and so on. So, we have lots of different groups of people to absorb ideas and contribute towards shaping digital health systems.”