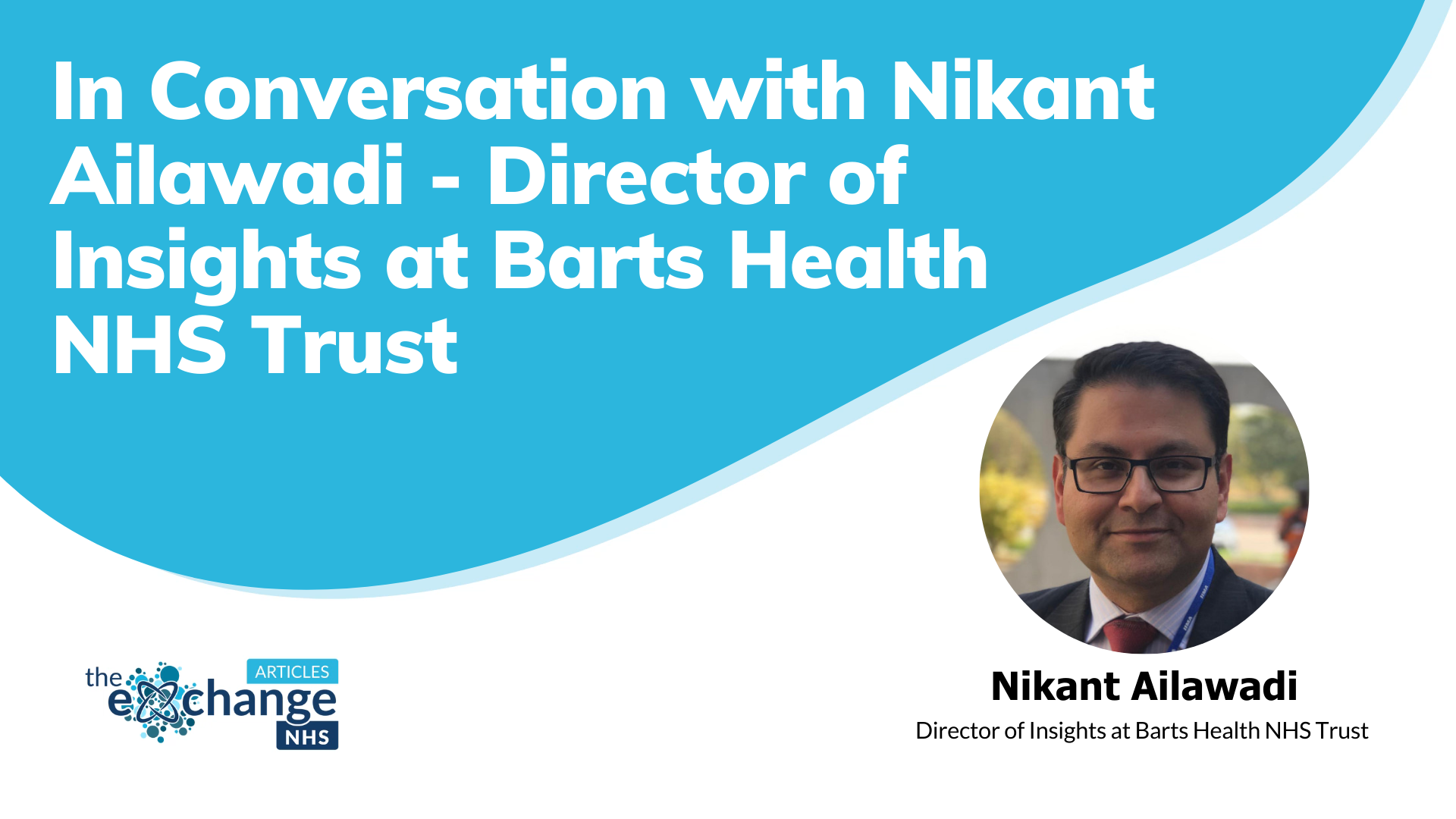 While a Director of Insights is quite common in the private sector, it is quite a unique role within the NHS. We sat down with Nikant Ailawadi, who has taken on this position for Barts Health NHS Trust over the last year and is working to build a team that will develop data and insights into progressive achievements for the trust. He discussed his role at the NHS, his career journey and his advice for those at the beginning of their own.

For Nikant, the most noticeable difference between working for the NHS and the private sector is the pace. He found the rate of development for projects and initiatives within the NHS to be quite slow, most likely because there is a lot of public scrutiny on how the organisation spends its money.

“The one thing I would say to anybody coming from a non-NHS or a non-public sector background, is when you’re coming here, try to keep pushing to raise the bar so that you bring others up to your speed as opposed to slow down to their speed. Because in some areas, like patient safety, the NHS moves really quickly but in others it can take its time.”

Coming from a global team of twelve people, it was quite the change for Nikant to begin his role for the NHS working alone. However, he is aided significantly by other departments, such as the Business Intelligence Unit, who manage the gathering and maintenance of data.  Within his commercial teams, Nikant would have delegated these tasks to his own staff.

“…because we work in a sort of devolved administration style where the centre is providing the strategic leadership, but we want more of the actual delivery to happen on site, because that’s where you’ll find the people who interact with the patients on a daily basis. That’s where all the magic happens. So, we want a lot of the implementation to be happening on site. What I’m looking to create is what would be an Insight Business Partner role. They would be supporting the sites with their insight agenda, so effectively working with the site leadership – the site CEO and the hospital exec boards. They’ll be crunching the data together and also providing context ‘this is what the insight is, therefore, this is what we need to do on hospital site to implement these changes.’ I’m looking for people who can not only analyse the data but also make sense of it, people who can look for the story in the data.”

Nikant took this further, expressing his belief that organisations should focus on actionable insights.

“So the big passion that I have is seeing Barts – or any other organisation – move from being data based to insight driven. That is the big change, right? Though the former is a good step, it’s what a good Business Intelligence team does. But that’s only halfway there. The real difference is when you start extracting actionable insights from that data, not just insights, but actionable insights, and then you use those to drive your decisions. That’s when the real power of insight comes through.”

Nikant discussed the challenges of finding the right people for the roles he intends to create. He is required to engage with stakeholders and convince them that there is value in his desired roles. They must then approve the budget. To achieve this, Nikant has created a roadmap for the senior leadership to help them visualise the achievements that can be made with his ideal team set up.

An additional challenge is finding the right talent.

“Not everybody wants to take a big pay cut and come work for the public sector. I took it, I’m sure other people have done the same, because they thought ‘Okay, this is a good cause, we want to come work for it.’ But it’s also a great place to work. You don’t have the same stress as working in a typical private sector, or an agency role. But it also depends on how much you want to contribute. You can come and coast along, but that doesn’t work for me. I need people who want to come and make change. People who are ambitious.”

Nikant has had an impressive career, having worked across the globe for various organisations. Originally from India, he has also worked in Czech Republic, Cyprus, Poland and the UK. Prior to winning a scholarship to do his MBA in 2006, Nikant worked for Synovate (which is now Ipsos), managing big accounts, and helping the organisation in its digital transformation. After his MBA, he took a step back from agency roles and ended up working for Cisco, leading a major channel management change programme. He completed his dissertation on the company’s channel partner strategy.

“The role was using insights, and using what the market was telling us to run a major change programme, and I was doing that for the UK and Ireland. Specifically, this was launching a programme called SmartCare, which was helping to move Cisco from being a product-led to a service-led organisation. We were selling big boxes to BT – big routers, servers and switches and we decided to go into a service model where we would sell the services as well as the products. And that was a really interesting game changer.”

After that working for GSK he ran Global Market Research, before moving to the construction industry, working on strategy and market penetration. He then set up a global market research analytics and insight team at the British Council, part of the Foreign Commonwealth Office, eventually, Nikant was headhunted for the NHS.

“It’s the curiosity about data that has been the common thread across my career. What is the data telling us and how do we use that to make sound business decisions?”

A non-negotiable skill is curiosity, according to Nikant. Specifically, curiosity about data and about people.

“When I was an account director for a very large FMCG client in Poland, we ran a monthly tracker. Every month, we would go and do 2500 face-to-face interviews, and the data had to be turned around really, really quickly for their senior leadership team. I’m sure the first couple of times, my colleagues must have thought that I’d gone mad, because I would sit on the floor with a hundred printouts spread all around me. And I was just moving them around. I was physically trying to find the story in the data to say ‘how does that story flow through these different data sets?’ And that’s the level of curiosity that I think you really need if you want to succeed – not just to say ‘here are five data tables. This is what it’s telling us.’ Where the insight bit comes in is ‘so what is the story here? How is that data point here connected to that data point there? So how do you connect the dots between them?’ And that’s what I’m calling my strategy that I’m setting up at Barts as well – “Connecting the Dots”. That’s the name I’ve given to our insight strategy. Effectively, it is about connecting the dots. It’s not about data crunching, it’s about connecting the dots, finding the story, and then using that to drive business decisions. And not just insight, but actionable insights.”

Nikant discussed the significant challenges to his role. He listed three dependencies – the right data, the right tools and the right mindset to work with the data.

“So, the challenge is, then how do you keep pushing on getting those three dependencies sorted without giving up? How do you then balance that, because at the end of it, you do see the big benefits of getting your three ducks in a row. And that part of the challenge is also what motivates me. I am going to get this right, I am going to sort it out. And I will make us a lot more insight driven, patient centric organisation. So that’s what makes it interesting. Because if it was already all sorted, then they wouldn’t need somebody like me to come in and sort it out.”

Put Your Hand Up

“The job description is only a starting point. That’s what it says on the tin – don’t be restricted by it. There are probably twenty other really interesting things that need to be done. If you think that you have the skill set to do those, put your hand up. Have a stab at it.”