In Conversation With: Niamh McKenna, CIO at NHS Resolution 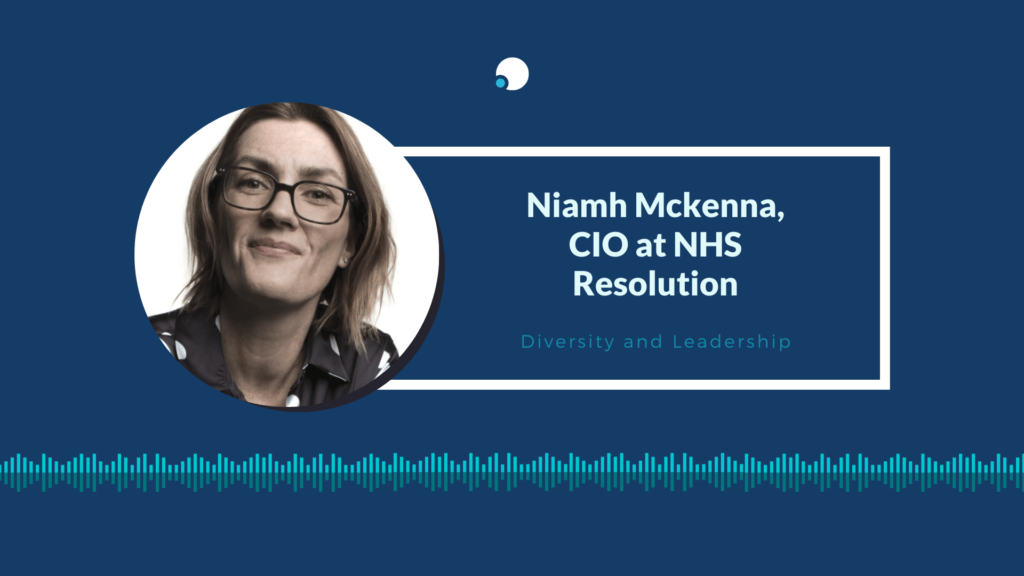 We spoke to Niamh McKenna, CIO at NHS Resolution to discuss the role of changing careers, the importance of role models and advice for future NHS tech leaders.

Niamh’s story is part of a series of articles highlighting the careers of female tech leaders within the NHS. We’ve brought together these stories in an effort to prove that the route to leadership is never a straight line.

I Wanted to be the One The Buck Stops With

Niamh, who graduated from University with a Social & Political Science degree, found a career in consultancy. Working for Andersen Consulting, later known as Accenture, Niamh found a career that would last her 26 years.

“Many people think of Accenture as a consultancy firm and I did do my fair bit of consulting, but I also worked in the outsourcing department which has a real variety of experiences and challenges. I have done a lot of different things, from learning  how to programme COBOL, to retail and in-store operations and running a helpdesk.”

Jobs become careers and careers become massive parts of our lives, with friends and experiences that stay with us. Leaving a role after 5 years can be daunting and difficult. For Niamh, who went out to join the NHS after 26 years at Accenture, it was one of the scariest moments of her life.

“One thing you get when you’ve been in an organisation for that long, is you’ve kind of got the Rolodex to die for. You can pick up that phone to so many different people. Leaving that behind was scary, leaving not just colleagues but dear friends. All I could do was reassure myself that all of the best career moves I’ve made have always been a leap into something unknown.”

Niamh, who was leading Accenture’s Healthcare Practice in the UK, left Accenture with pride and sought her next challenge that would give her the levels of ownership and accountability she was looking for, after almost 30 years of working with clients who make all the final decisions.

“I wanted to be the one the buck stops with. The CIO role came up, and I thought that this is a unique opportunity. They’ve never had a CIO before and they’re looking for someone to come in and help them transform. I remember thinking how rare this opportunity was, so I went for it.”

The Importance of Role Models

Niamh wasn’t alone when she made the decision to leave her role at Accenture. Helping her find the courage to take the leap was a support network of mentors and role models that have formed from years of relationship building.

“Oftentimes we do need those people who can give us a little push – especially when you’re early on in your career because it’s hard to find that courage to go and get something. Having a mentor who can say: ‘no, you got this’ is massive.”

Whether it’s formal or informal mentors, these individuals are people you should keep hold of as they can help you when you need help the most. For Niamh, who has had mentors who have spotted opportunities for her and those who have nurtured her into those opportunities, role models and mentors are an important part of a successful career.

“I would encourage anyone at an early stage of their careers, seek out those people and ask for advice. Find people and just talk to them. I’ve always found that people are happy to give time, and I try and give time as well. I think it’s really, really important.”

Curiosity and Interest is Essential

From each, we learn something new – but if there’s one thing that ties them all together it’s the love for technology, change and transformation.

For Niamh, who has a strong technical background that has been driven and nurtured for her own passion for technology, being a technology leader is more a question of care and curiosity than it is knowledge.

“It’s important you’re passionate about it and have an appreciation and an understanding about the processes – but you don’t need to code the thing yourself. Where you can, you should build up knowledge and that comes out naturally from your curiosity – which is essential.”

For those struggling with that side of the role, Niamh recommends giving it a go and trying out the processes that seem to be impenetrable to give yourself a better understanding of the process you’re looking at transforming.

“I was talking to someone about robotic process automation and I was sharing with them that I had a repetitive task to do myself. So I downloaded a trial copy of one of the RPA tools and decided to use it for my own personal task to see if I could get the robot to execute it.”

Returning to Work After Maternity

Niamh, who has two young children, echoes the sentiment of many female professionals who struggle to find the balance between their career and their family aspirations.

For Niamh, the biggest impact was around simply finding the balance.

“I had underestimated how challenging it would be for me just to get my act together on being a mum working part time. Getting home and dealing with the baby. It was all a lot to handle.”

A transition like no other, returning to work after parental leave is hard. You’ve been out of the flow of the office for weeks or months, and you’re returning as a different person with new priorities and concerns. (Not to mention the stress and strain of endless new logistics.) It’s jarring and often overwhelming.

Niamh, as it happens, was given a project that had a smaller scope – a decision that, in hindsight, was the right one despite being chosen for her.

“I was quite angry about that but then I sort of sat back and I said to myself, if someone had said to me at the beginning of that process:” you know, you’re going to do this role, but it’s not a really big meaty role. It’s not going to get your promotion, it’s not going to make your career progress. But it will give you the time and capacity to work out how on earth to juggle this new life that you’re in” – I would take it.”

After taking the leap from her long career with Accenture, Niamh is now 4 months into her role as CIO. Here she is driving digital transformation at the very top. For those looking to follow in Niamh’s footsteps, she has this advice:

“Don’t be afraid to try something completely different. That’s sometimes hard for women – but don’t stay in your comfort zone. I’d always recommend people try to have a go [at new things] and challenge yourself.”