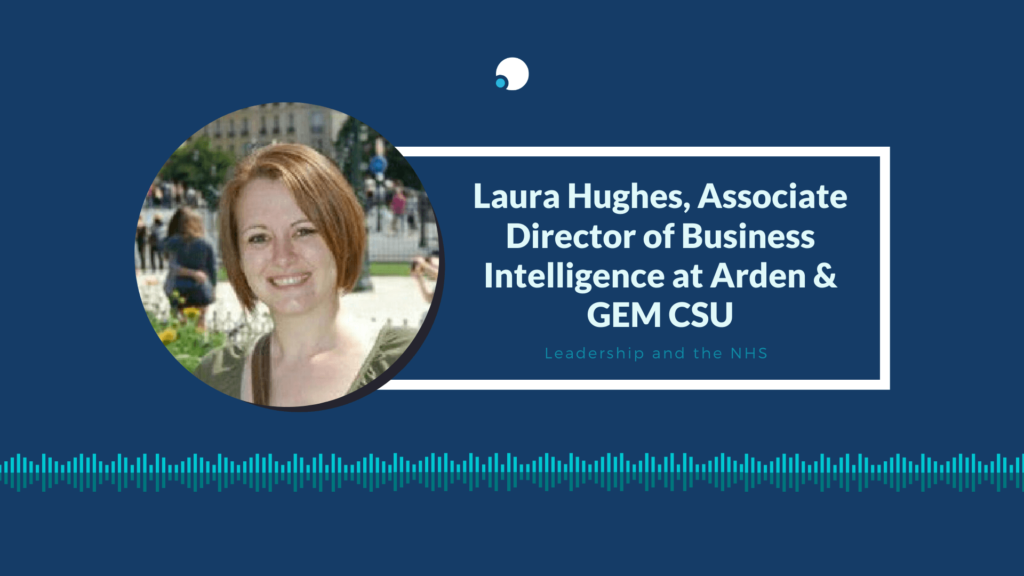 Laura’s story is part of a series of articles highlighting the careers of female tech leaders within the NHS. We’ve brought together these stories in an effort to prove that the route to leadership is never a straight line.

After accidentally wiping her entire computing coursework from the floppy disks they were stored on, Laura’s plans to go to her preferred university were scuppered. Instead, Laura joined the NHS in Hertfordshire. Brought on to do basic office admin, Laura was quickly recognised as being process-driven and passionate about information – which led her towards working with clinical information systems.

Taking a position as Second Line IT Support, Laura got to know her colleagues in the technical teams round the trust. After learning SQL and UNIX from her peers, Laura took a programming role. In this role, Laura was again recognised for another one of her skills.

“I was quite personable and I was noticed by a training manager who wanted to take me ‘out of the basement’ and into a training role.”

“I absolutely adored that job because it really took me out of my comfort zone – which was just sat there in front of a computer playing with numbers – to dealing with a whole raft of people. “

After a successful few years, the training role was growing. Before long, Laura was supporting the NHS ‘Connecting for Health’ programme. When the money for that scheme ran out, Laura was redeployed into HR to implement the Electronic Staff Record (ESR). Unfortunately, Laura found herself without a team for this role.

Without that team around her, Laura felt motivated to make the switch to the Midlands where she would commit to the same role, but take on extra responsibilities for Workforce Analysis, Workforce Planning and System Management so she could manage a team.

“For me, that was a perfect role because it balanced the people side and the technology side. I managed to build that team in a way that it managed itself on a day to day basis.That afforded me some really good opportunities to get involved in projects and work outside of my normal area.”

One of these ‘extra-curricular’ projects that Laura got to work on involved working with the CIO at the time around safe staffing levels. This set Laura up nicely to take the Head of Information role when it came up – a post Laura was at for 5 years before joining Arden & GEM in her Associate Director role.

Do You Need to Be Technical?

Leadership, regardless of the industry, requires a smorgasbord of complementary skills and experiences that can take decades to define and hone. Leadership in technical circles is no different.

For some, one of the non-negotiables for leading technical teams is a technical background.

For Laura, it’s not as simple as that.

“You don’t need to be a technical guru, but what you do need is to be able to talk the language and have a high level understanding of the challenges and barriers that technical teams have.”

With this knowledge, you have enough to understand who you need in your team. The less tangible aspects of what makes a good leader then come into play. How do you motivate that team? How do you learn to let go and trust them? These are important questions you’ll need to answer if you want to lead a technical team.

“These are the people who are going to deliver the vision. I suppose what I found more important than the technical part of it is understanding how that technical strategy fits into the wider organisational strategy and vice versa. It’s really important to be able to sell comprehensive visions to other leaders in a way that helps them to understand your tactics without getting bogged down by that jargon, and completely switching off.”

One of the topics we’re very keen to discuss on this series is around STEM careers and, more specifically, the readiness of people from all walks of life to approach STEM subjects as a solid career option.

My Daughter, who is currently in primary school, is part of the Science Squad – one of the school’s extra-curricular activities. We encouraged her to go for it, and so did many of her teachers.

With growing encouragement for young minds, the diversification of leadership at the highest level will only go one way: up. For Laura, however, who explored STEM subjects many years ago, encouragement, support and motivation was almost non-existent.

“I was the only female on my computing course, which was horrible. I spent a lot of time on my own during that time.”

Despite support and encouragement for minorities growing in education, lack of representation at the highest level almost always results in feelings of doubt which can quickly turn into a sense of inferiority.

For Laura, who lacked a senior female role model, conferences were a particular area of anxiety.

“It’s a lot of men in suits. And it’s quite daunting. You don’t know anyone and you don’t have a network. I found it very difficult and would often sit in the corner by myself and make myself scarce.”

Growing in confidence and experience over the years, Laura quickly realised that there were many who felt the same – this realisation helped her cope with conference jitters.

“I’d actually look for the guy who was sitting in the corner by himself with a coffee looking a bit awkward and might just pop over and strike up a conversation. Nine times out of ten, everyone’s feeling exactly the same.”

We’ve asked every contributor to this series the same question: do you believe you’ve experienced imposter syndrome? Almost all of the contributors believed they’ve experienced it in some way. More alarming, however, is the number of people who felt the feelings but didn’t know the name to attribute to it.

The simple fact of the matter is feelings of doubt and inferiority transcend our careers. For Laura, who has experienced doubt from a very early age, imposter syndrome can be debilitating.

“I always had a whole list of reasons why I wasn’t good enough. And it started from a really young age.”

Laura’s lack of university education and the fact that she was very young when she came to manage people both cast long shadows of doubt over her career that took a long time to shake. This led to her creating what she calls her ‘Professional Persona’ to help get around the anxiety of imposter syndrome.

“I basically hid behind that persona for a good three years. It was always to remain calm, over prepare for everything and describe problems and difficulties as challenges – instead of admitting you feel overwhelmed or simply asking for support  .”

It was only until Laura was called out by one of her previous Managers that she actually realised that her persona was damaging.

“He asked ‘why can’t you just be yourself?’ and that was a big turning point for me. I gave myself a good talking to and I went back to basics and reassessed my personal values so I could accept myself for being me.”

“Surround Yourself With People Your Trust”

For Laura, who has a very successful career in digital transformation and informatics, the key to succeeding in a technical leadership role within the NHS starts with surrounding yourself with peers.

“They don’t need to be people in your area of expertise, and sometimes it helps to have people who aren’t because they see it from a layman’s point of view.”

From there, it’s key that technology leaders can bring technology to life and carry people on a journey with it.

“I’ve always said technology is ones and zeros and a bunch of plastic and metal. And you need to make it tangible. You need to bring it to life and you need to give it a bit of a personality that people can take away and sign up to.”