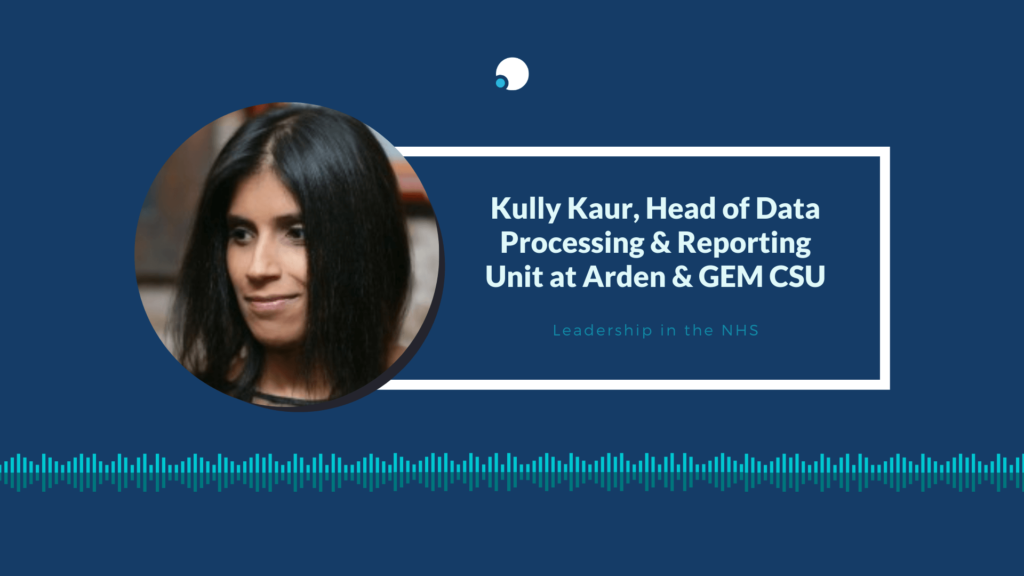 Kully’s story is part of a series of articles highlighting the careers of female tech leaders within the NHS. We’ve brought together these stories in an effort to prove that the route to leadership is never a straight line.

Computer Science Was a Man’s Course

Graduating with a Computer Science Degree, Kully started working in the NHS in 2001 as an Information Assistant. Over the course of her degree, Kully was exposed to competition and started to develop her ambition, determination and drive to succeed in a system that wasn’t

“It was a course that was predominantly Male. I believe we had six females on the entire course and we felt that we really had to prove our worth and abilities to the males on the course. It spurred me on to study that bit harder.”

Combining her love for healthcare and her passion and knowledge in Computer Science, Kully completed her degree with a dissertation that focused on building healthcare systems, knowing that this would be invaluable for a career in the NHS.

After working her way up the pay bands gradually, Kully is now Head of Data Processing & Reporting Unit at Arden and Gem CSU. In this position, Kully is responsible providing senior leadership for the CSU DPRU, working with NHSE/I regional and national teams and heads of services to deliver a robust service which meets the needs of service users.

Always looking to grow and learn, Kully took the opportunity to do a Masters in Public Health followed by the Mary Seacole course – study she would have to commit to whilst in her full-time position in the NHS.

“The novelty of being a student had well and truly worn off. It was 9-5 with evenings. Every new door it opened presented new challenges and I was really ready to give up towards the end.”

But, after getting her head down and muscling through it, Kully was able to prove her ability once again – while walking away with lessons that’ll see her through the rest of her career.

“I think it’s that doubt and fear you put in your head. What if I don’t succeed? I’ve let the organisation down. But once you trust your abilities, you get through it.”

You Feel You Have To Prove Yourself

In 2019, it was recorded that the BAME working population of the UK is 12.3%. In the NHS, BAME candidates made 38.2% of all external applications for jobs.

Although having a zero-tolerance approach to any form of discrimination and prejudice, the NHS still has a lot of work to do when it comes to equal opportunities. The numbers speak for themselves and paint a world where professionals like Kully are often left feeling a sense of doubt and urgency to work harder, faster and better than their none BAME colleagues just to keep up.

Why? Because there is a significant lack of representation at the highest level.

“People do have their misconceptions about me. I’m an Asian Female and sometimes it’s detrimental because you always feel you need to speak louder and stand out – but that’s not who I am.”

Throughout her career, Kully has always been a skilled listener and observer. Always willing to add value when she can, Kully found these scenarios, where she felt she needed to go out of character and play up to the room, incredibly challenging.

“You feel like you’ve got to prove yourself, you’ve got to go into your own head and convince yourself that you are here for a reason. You’ve not been given this job because you tick the ethnicity box or the female box. You’re here because you’re more than capable.”

Like many of the professionals we speak to on this series, Kully has been able to call many of her colleagues role models.

Good mentors can be pivotal during major junctures of your life, both personally and professionally. They can steer you clear of disaster, provide prescient views of the future that you can’t see, and heal your soul when you’re hurting.

For Kully, who has had both male and female role models throughout her career and had different people who have provided very different types of support.

“The Males who have supported me are always keeping me driven. They’re telling me to never give up and supporting me to push through. The Females are always supporting each other hand in hand – ‘how do I help get you there?’. It’s one big support network.”

You Need To Have That Drive

Ambition and drive, a core skills for NHS leadership, has been highlighted by many of the professionals we’ve talked to throughout this series.

For Kully, who rose through adversity and been rewarded for her determination, the key to getting into positions of leadership in the NHS lies in that ambition.

“Your background doesn’t matter. You don’t really need a particular skill set, either. What you do need is that drive and ambition. Take one step at a time. The NHS has got so many people with so many different skill sets that we complement each other. I believe one person on their own cannot do this. We are the NHS.”