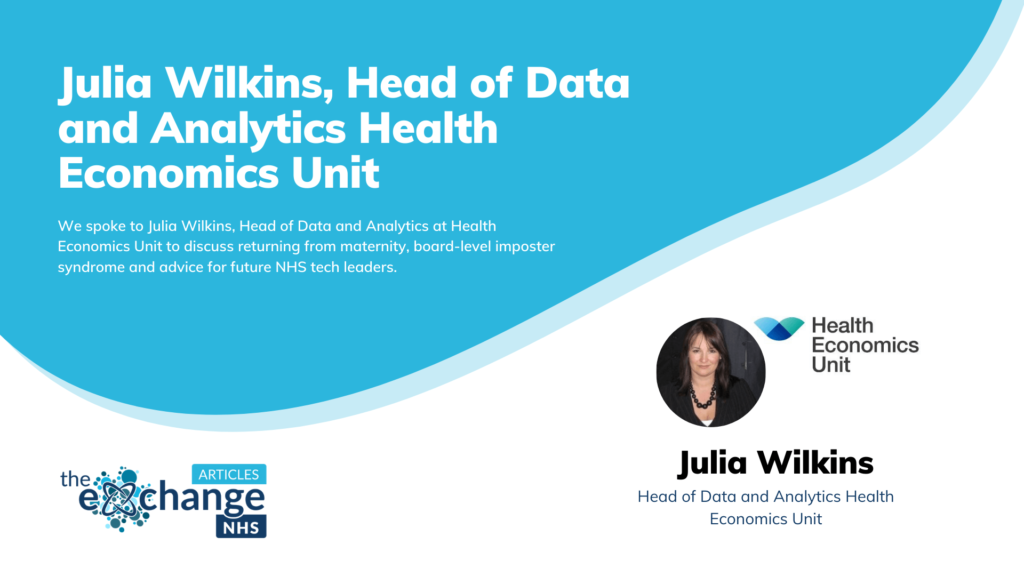 We spoke to Julia Wilkins, Head of Data and Analytics at Health Economics Unit to discuss returning from maternity, board-level imposter syndrome and advice for future NHS tech leaders.

Julia’s story is part of a series of articles highlighting the careers of female tech leaders within the NHS. We’ve brought together these stories in an effort to prove that the route to leadership is never a straight line.

Starting out as a biochemist, Julia worked in medical oncology for a time before deciding to leave behind life in the labs. With more of a keen interest in the data and analytics side of the role, Julia went after a role in the Pharmaceutical industry in a sales and marketing position. In what turned out to be a very formative experience in her career, Julia was sponsored to do a part time MBA over three years. After 2 years of that, the unexpected struck.

“I was pregnant with a baby daughter. So I decided to finish when I had the time. That was 25 years ago and I still haven’t found the time!”

Instead, Julia would move up to more senior roles within the pharmaceutical industry. It’s here she would discuss her passion for uplifting ideas and implementing change. To progress in this industry, Julia felt like she would have to move nearer to London.

“I decided that I had too much responsibility with my family to move – I was a single parent after all. Also, I didn’t feel like my ideas were being taken on board by senior managers”

This sentiment was echoed by a friend of Julia’s and it wasn’t something either of them were going to take lightly. Over the course of a number of weeks and months, they decided to set up their own company – a data driven agency.

“We both gave up pretty secure jobs. It felt like a massive risk but I had a massive support network behind me.”

That Agency ran for 10 years, with it growing to 20 people in an office in the northwest with their book growing every year with new NHS and Pharma clients.

This attracted the attention of a global communications company that wanted to buy the company.

“Neither of us thought about that. We were just having a good time, being our own bosses.”

The company would sell in 2012 and Julia remained working there for the next 5 years before Julia grew tired of corporate life and large company politics. Crucially, she felt like she wasn’t learning or growing as much as she was before. For that reason, Julia moved on to the NHS.

“I had a lot to learn, it was a very, very steep learning curve, it was a very, different culture to what I was used to. And I had to really change the way that I worked and thought about things. “

After 2 years Julia realised that she wanted to focus more on the generation of evidence that would contribute to the adoption of innovation within the NHS.

“We decided that we would set up what would later be called the Health Economics Unit. It’s a specialist agency within the NHS, that works with NHS partners, charities, academia, etc. Our team of specialist economists, econometricians, and analysts have extensive experience within the NHS and industry, we use this experience to develop models and evaluations, and to generate evidence from integrated, real-world datasets to inform complex health decisions.”

The ultimate aim of the Health Economics Unit is to create insights that will lead to positive change for patients.

The Temptation is to Feel Inferior

Now 3 months into her position with the Health Economics Unit, Julia is on the very cutting edge of data-driven change initiatives.

Reflecting on her career, Julia remembers an issue many of the professionals we’ve spoken to on this series share – the juggling act.

For Julia, putting her Masters on hold is a bit of a sticking point.

“I was trying to do everything. A job, a Masters and a Mum. I wasn’t really giving either one my all. So now, when I look at my peers who have masters and PhDs – the temptation is to feel inferior.”

Formal qualifications are the culmination of hard work. As transformative as they are, the focus is almost entirely on the outcome and not the journey. For Julia, who stills plans on finishing her Masters, achievements are plentiful across her career. She believes that no one should be apologetic for their lack of qualification when their career speaks for itself.

“I’ve set up a company. That company has been bought. I have all of this amazing experience. So when we do start to go around the table listing achievements, I don’t let myself apologise for the fact I haven’t got that Masters yet!”

Julia’s career can be defined as a relentless pursuit of the next challenge. From setting up her own company to creating a division on the cutting edge of data-driven change, Julia has had her fair share of stress in between.

One particularly stressful situation came when Julia, operating her data-driven agency, suddenly found all of her data from NHS Digital suspended.

“The strategies I had to deal with those fears and anxieties I had at the time, the people I had around me – they all helped me through it.”

Outside of your immediate network, Julia also recommends keeping your outlook positive in the face of crushing circumstances.

“It won’t last forever. You’ll learn from it and positives will come from it. I say this to the people who work for me: sometimes you just have to reward yourself for getting through the day. Brush off the negatives and focus on the positives.”

You’ve Got To Be A Bit Cheeky

After taking the leap to set up the Health Economics Unit during COVID-19 Julia is driving digital transformation at the very top. For those looking to follow in Julia’s footsteps, she has this advice:

“Don’t be afraid to ask people how they did it. Even out of the blue because you’ve got to be a bit cheeky. There’s so many people out there who are willing to help – it’s about having no fear and reaching out.”