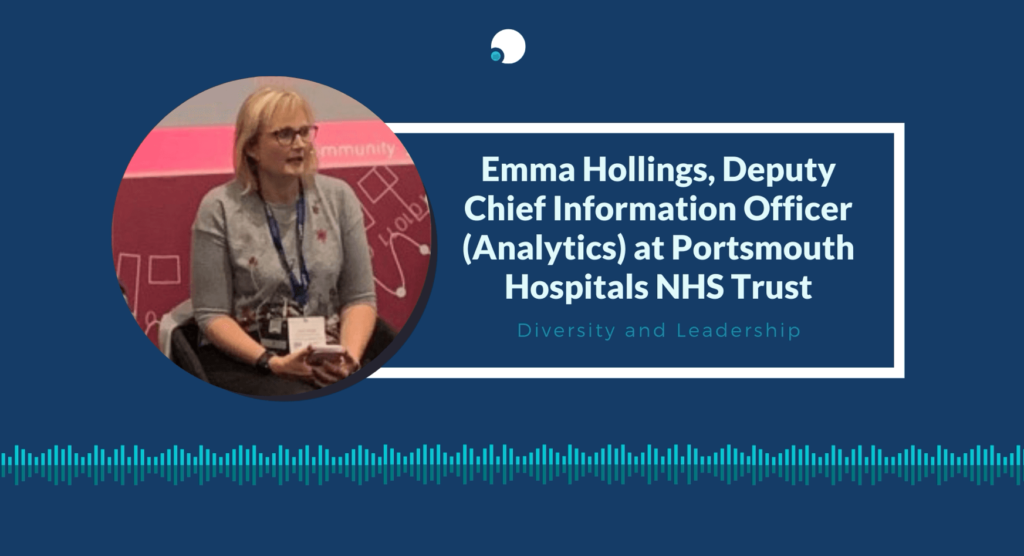 We spoke to Emma Hollings, Deputy CIO at Portsmouth Hospitals University Trust to discuss leadership, starting a new role during the lockdown and why it’s so important to ask ‘daft’ questions.

Emma’s story is part of a series of articles highlighting the careers of female tech leaders within the NHS. We’re bringing together the stories of these courageous leaders to prove that the route to leadership is never a straight line.

As Deputy CIO, Emma is at the very tip of the NHS’ digital transformation spear. Looking back on a career that took her from teaching English in Tenerife to health informatics consultancy, Emma’s route to NHS tech leadership certainly wasn’t a straight line.

A defining moment in Emma’s career came when she set up her own limited company and provided consultancy around project management and informatics for both CSU and private companies. In this role, Emma was head of information, having to travel to Watford, London and the South West,  for one of the key providers of the NHS111 key providers) in the NHS111 rollout in 2012

“I should have a badge that says I survived that time. It was a really good experience but it was very challenging.”

Following that, Emma worked on a number of key projects including setting up data services for the South Central Commissioner’s Offices in response to the Social Care Act before taking a permanent role as Head of PMO- Digital Services at South London and Maudsley NHS Foundation Trust. Here Emma took a lead on the trust’s data strategy before moving into the Deputy CIO for Analytics role in April this year.

At a time when most people were battening down the hatches, Emma was in the middle of a career move.

“Some of the normal induction programme had been stood down due to Covid and face to face introductions and meetings were difficult to arrange, so it’s been more difficult to get to know people”

Once considered unrealistic, sabbaticals and reskilling is now accepted – and in some cases encouraged – by employers and career professionals alike.

For some, it can be a way to assure your core skills, reaffirm career trajectory and crush future imposter syndrome.

Emma, who went back to university after a false start in her early career, believes this false start and her venture back in education was an important milestone in her career as it helped her hone in on her true self.

“Some of that goes back to 15 year old me having a certain expectation of where I was going and now finding myself somewhere I hadn’t considered. For me, it’s taken finding something that wasn’t right for me to realise where my strengths lie.”

This extract, from Annabel Crabb’s thought-provoking book, The Wife Drought, sums up the pickle that working mothers all-too-often find themselves in – a pickle that Emma, who has a teenage son, has grappled with throughout her career.

“There seems to be this never-ending guilt that you’re never in the right place to do the right thing or you’re missing out on something.”

Working mothers face a distinct challenge when it comes to work and their own work-life balance. In the workplace, working mums need to focus 110 percent on their workload, as if they are trying to prove that they are just as capable of accomplishing tasks and beating deadlines as they were before. In fact, they often feel as if they have to overachieve to combat the belief that they might have “gone soft” or are not as focused and determined as they once were. They will pull longer hours just to show that they are as dedicated to the company as they ever were.

With COVID-19 necessitating remote working policies in both the public and private sector, conversations around more flexible working patterns will surely follow. These flexible work options are really one of the only ways that working parents can not just have work-life balance, but work-life integration.

“There’s Something About Asking Daft Questions”

We’ve all hesitated to ask something, fearing that others will find our question stupid. Staying quiet may seem like the safe option – but in all likelihood, you’ll eventually regret it.

For those developing their careers right now, Emma recommends stepping out of your comfort zone and asking those ‘daft’ questions.

“Don’t be afraid to try different roles. Even if it feels a bit uncomfortable. That’s a good way learn about what’s out there. There’s something about asking the daft questions. So you may feel it’s daft on an individual level, but actually, it could be that everybody around the table is thinking the same thing. But nobody wants to say it.”

Ask – and encourage others to ask – stupid questions because they have the magical ability to save you from a lot of trouble later on.