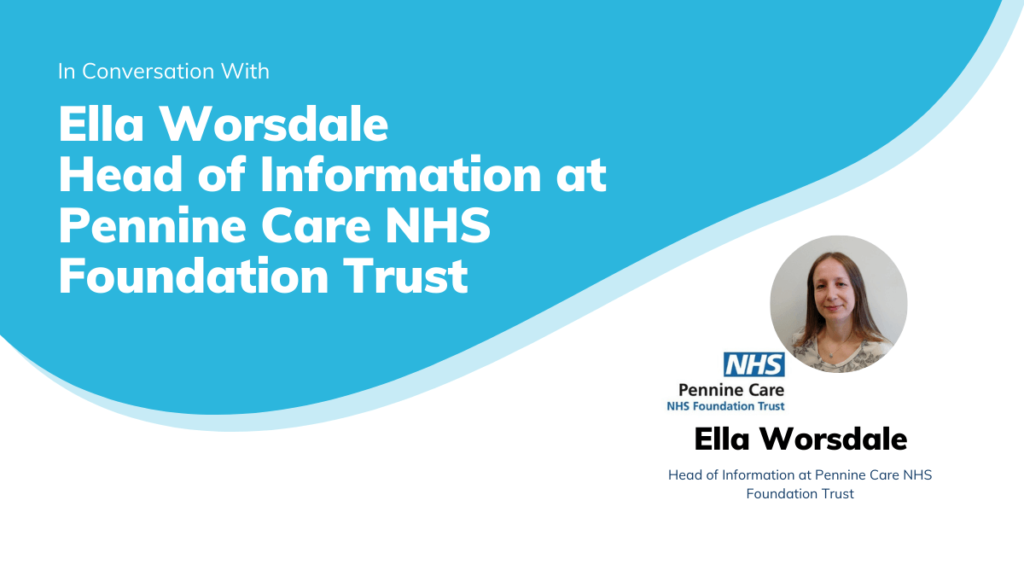 We spoke to Ella Worsdale, Head of Information at Pennine Care NHS Foundation Trust to discuss sticking through trying times, the influencing power of technology and putting yourself out there.

Ella’s story is part of a series of articles highlighting the careers of female tech leaders within the NHS. We’ve brought together these stories in an effort to prove that the route to leadership is never a straight line.

After studying communication at University, Ella decided to take a gap year and went travelling around the world. It was on this gap year that Ella was able to bring herself out of her shell and set herself on her path to leadership.

Her first role in IT was at Lloyd’s Bank, where she worked on security support while the big merger with Lloyd’s and TSB happened. After a few temporary roles in the finance sector, Ella decided that banking wasn’t for her.

It was around this time that Ella saw an advert for a Data Quality Assistant in the NHS. After applying, but not being selected, Ella had her heart set on a career in the NHS and joined Pennine Care soon after where she has remained 16 years later.

Her first major task at Pennine Care involved implementing a Patient Administration system for the trust. This involved testing, configuration and implementing the PAS system. During this time, Ella was exposed to lots of different parts of the NHS ecosphere and also discovered her own passion for systems, transformation and implementation.

“It was like discovering a secret about myself. I thought: ‘I could do this. I can really do this.’”

After successfully implementing that system, Ella moved into system administration – which didn’t excite nearly as much as her previous role. With that behind her, Ella moved into the Information Service. Here she climbed the ladder, achieving senior analyst positions and team leadership responsibilities until finally arriving at her current position as Head of Information.

“I was very keen to take charge and stick my head above the parapet. I had some bad managers in my early days which really showed me how I didn’t want to manage people.”

As Head of Information, Ella manages a team of analysts and developers who are responsible for the data and reporting needs of the organisation – from data warehousing through to report creation and analysis.

Ella has been instrumental in the organisation’s adoption of Tableau at their main BI technology.

“We release insight and dashboards to allow decision-makers to use the data in any way they want to operationally.”

Not many can say they’ve given almost 20 years to the same organisation. For Ella, who has given 16 years of her career to Pennine Care, it’s this commitment that has allowed her to be successful in her role while the organisation around her changes.

“This was a very different department 16 years ago. There was silence in the office – it wasn’t the nicest place to work and a lot of the team moved on. I, on the other hand, stuck to it.”

Although it was tough, Ella believes she learned a lot from the experience and that it influenced the management style she now has.

“I could have walked away and who knows what would have happened and it could be in a completely different place. But I stayed and I took a lot from it – both positive and negative that have contributed to who I am today.”

One of the amazing parts of doing a series like this is the sheer range of people I get to talk to on a daily basis. Despite the changes in their expertise and experiences, they’re all leading teams at the highest level of the NHS.

With that in mind, I’m always keen to hear what our contributor’s thoughts are on what skills are needed when it comes to leading technical teams – specifically, how important technical knowledge is to the leading and management of technical professionals.

For Ella, who has 16 years working at the highest level of information services in the NHS, it’s not an easy question to answer.

“You need to understand what people are saying because you’re responsible for going to other people and influencing and explaining things.”

Many will relish the opportunity to pick up more technical knowledge, but for some, the thought of anything technical might inspire fear rather than confidence. For Ella, it’s about breaking it down into simpler terms.

That is a starting point. Instead of obsessing over knowing everything, it may be more prudent to obsess over asking the right questions to get a firm understanding. Asking questions is one thing, getting the right answers is another. Another key skills for those who lead technical teams is being able to find the right expertise.

“I’ve seen managers be blinded by the technical aspects of a role. They see all this code, think it’s amazing but they neither could communicate what was happening.”

This is one area that Ella believes has significantly changed over the years – the idea that communication, for both manager and contributor, is almost more important than anything else.

Hands-on managers can be a bit of a double-edged sword. These managers are generally able to intervene before things get out of hand and possess enough granular knowledge to offer insightful suggestions, but they often reduce empowerment by stifling initiative and consuming a lot of employees’ energy by asking for too much follow-up.

After seeing the good side and the bad side to management during her career, Ella was keen to lead with trust.

But it’s not always easy when you’re so used to having your hands on the technical aspects of the role you’re managing.

This was the case at Pennine Care, where significant investment has been made into the senior leadership at the trust meaning most have a tech background or data background.

“When you’ve done it for so long, it can be hard to trust in anyone but yourself.”

The solution, for Ella, lies in staying positive and sticking to processes you know work that can empower the experts on your team.

Put Yourself Out There

For those who are looking to achieve similar success at the highest level, Ella has this advice:

“Put yourself out there. Find a mentor, someone to talk to about your career. You’d be surprised how many people are willing to share advice and open up.”