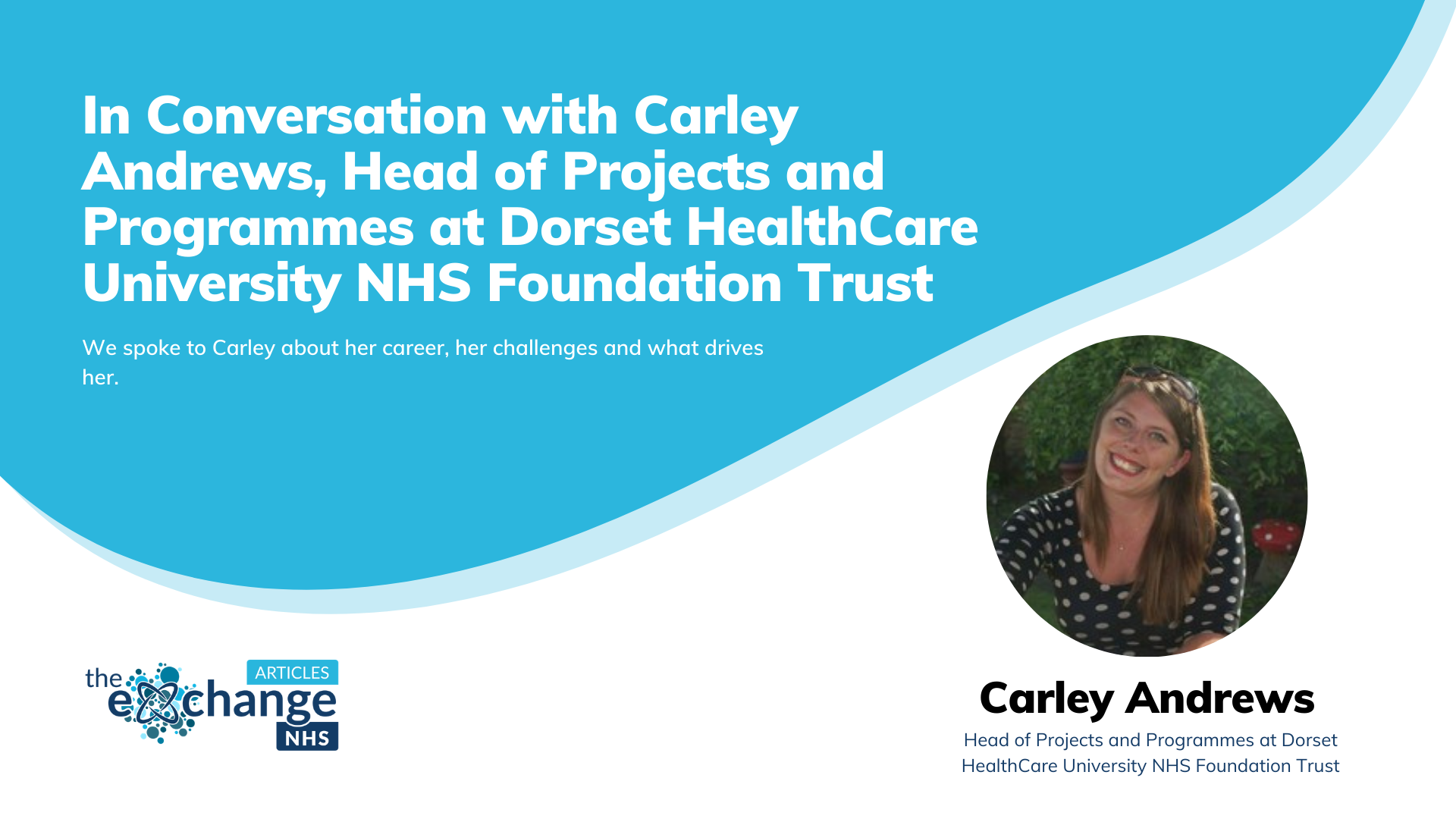 Starting out 14 years ago as a band three support secretary in a community mental health trust, Carley moved quickly through the ranks working on a number of implementations like the paediatric and orthopaedic services in Dorset where Carley was instrumental in contracting consultants from Southampton to come down to clinics to help lay the groundwork for outpatients, theatres and more.

After the success of that programme, the trust was now motivated to start engaging with IT products to carry the organisation forward. Looking at speech recognition, and the associated Windows 7 upgrade, Carley was engaged from the outset where she operated as the soul project personnel in IT. She successfully navigated their move towards speech recognition and away from tapes.

At around that time, a merger for non-clinical services in Dorset was taking place – one of the services being merged was IT. Carley then became part of an IT department that now had a fully resourced project team.

“And that’s where the fun really started. A good example was a project in ICU. At the end of patient beds they had big graphs that would chart the patient’s blood pressure and heart rate. We went in and put a little gadget on the patient’s finger and made it all digital. We took all the paper charting away meaning all the time and effort that the nursing staff had to put into doing that every day was now freed up to go into patient care.”

Now with a fully resourced Project Team, Carley was able to influence fully the change that would help deliver healthcare at a higher, more human level. With high levels of engagement from both clinical staff and other non-clinical staff, Carley is able to look back on those projects with fondness having truly improved caregiving outcomes through digital solutions.

“Three months after the implementation of the digital charting, I went back to the department to visit. I walked into a patients room and saw a nurse was there with a patient, holding his hand in hers. I immediately thought: ‘she’s taking his pulse’ forgetting that she didn’t actually need to. I realised that she was just holding the patient’s hand – simply caring for him. It was an incredibly rewarding moment.”

From there, Carley moved over to Dorset Healthcare where she worked on projects like the Dorset Care Record which involved the sharing of all records across the whole of the ICS Partners in Dorset.

Now Carley is managing the Portfolio across the whole environment with her other colleagues who specialise in the technical and operational side. Focusing on aligning the strategic and digital plans with the ICS plans for the future, Carley is now sitting at the crest of the digital transformation wave at Dorset Healthcare University NHS Foundation Trust.

Encourage People to Challenge You and Each Other

To better yourself physically, mentally, professionally, socially and spiritually, you should surround yourself with people who challenge you.

As a runner – this resonates with me. Up until I joined a Park Running Group, I was very much going through the motions with my running. Joining that group surrounded me with people who challenges me and helped me take my running game to the next level.

In a professional capacity, surrounding yourself with people who push and challenge you is a doctrine that Carley lives by and has carried through to all the teams she’s been a part of.

“You should encourage this but make sure that it happens in a very kind and considered way. If you can build your team around those people then you can’t go too wrong.”

The Difference Between a Mentor and a Coach

More often than not, mentoring and coaching are used interchangeably in the business context. That’s why at many organisations, a mentor is expected to undertake coaching responsibilities as well. But despite what most people might think, there is a big difference between a mentor and a coach.

Coaches work on improving the performance and wellbeing of an individual or group through setting goals, exploring values and beliefs, and creating plans of action.

Mentors differ in that they usually impart their wisdom, knowledge and advice through shared experiences and, sometimes, informal discussion.

The term Mentor originates in ancient Greece, with Homer’s classic poem, ‘The Odyssey’, in which Odysseus appoints a guardian called Mentor to look after his son in his absence, as a teacher, guide and friend.

Carley’s colleagues at work form a close-knit group who aren’t afraid to have challenging conversations. Her right-hand guy at work is her rock and the latest in the line of inspirational friends and leaders that Carley has had the satisfaction of working with over the years. Having both mentors and coaches throughout her career, Carley see’s the value in both,

“Finding that mentor can help you realise your potential,  push yourself and having that coach that will unlock the things that they know you already have.”

We’re in this for Healthcare

When it comes to advice for those looking to follow in Carley’s footsteps, Carley has this to say: