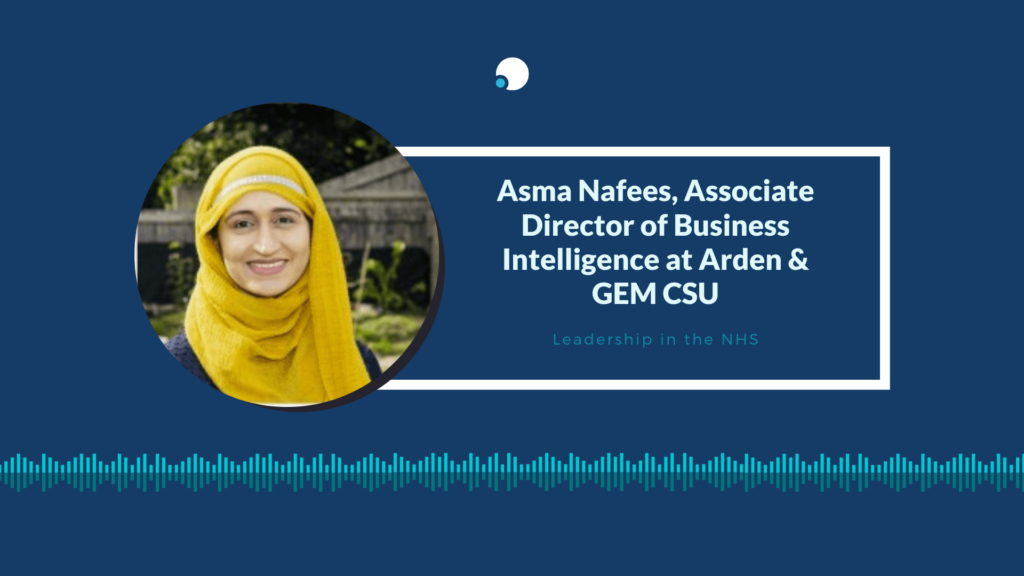 Asma’s story is part of a series of articles highlighting the careers of female tech leaders within the NHS. We’ve brought together these stories in an effort to prove that the route to leadership is never a straight line.

“There Aren’t Many Solicitors Who Find Their Way Into Technology”

Asma, who was 5 days into her role as Associate Director of Business Intelligence at the time we spoke to her, spent the six years prior within a CCG in Coventry and Warwickshire.

By background, however, Asma is a qualified solicitor and worked in a Commercial Property firm prior to joining the NHS.

“I’d say the move to the NHS was accidental. The recession in 2008/2009 hit, and I was made redundant as a commercial property solicitor, so I applied for an NHS job with the intention to go back to the law. But I found as my time in the NHS grew, that I’d found a new passion for making a positive change in healthcare services.”

Deciding to stay in the NHS, Asma felt she needed to embed her commitment to the NHS through some formal qualifications. With that in mind, Asma took the decision to undertake a Masters in Healthcare Leadership – a move that, on reflection, probably wasn’t required at that time.

“It was about my own blockers, I must admit. But I would say anybody who is looking for structured development, go to the NHS Leadership Academy website.”

Coming away with a distinction, while operating within her role and looking after three children, Asma was able to continue to move through the ranks of the NHS towards her ultimate goal.

“I gained so much from the Masters but, looking back, it was my own blocker. Me deciding that I needed to do it, versus me choosing to do it, are two completely different things. I think as women we do put up our own barriers and benchmarks about what we need to do before we can progress to the next level.”

Starting her role in the NHS with CBSA over a decade ago, Asma focused mainly on Business Intelligence at a time when CBSA/HCS were offering BI Services at scale across the West Midlands. Over time, and in moving over to a CCG, Asma’s role expanded to include Acute Contracting – a role that drew on her legal expertise.

“After 2 years within the CCG, I took on Contracting as part of my portfolio too. More recently, upon return from maternity leave at the end of 2019, I went back to a BI and Planning focus as the Deputy Director of Intelligence, Planning and Performance, supporting Place-based transformation work, and the the assurance and oversight of Restoration plans to CCG Committees.”

“I Stopped Being Apologetic About Being a Mum”

It was this expansion of Asma’s role into Contracting that her legal expertise really started to drive the expansion of her role – and also where she found the pivotal moment in her career.

“There were discussions about me expanding my role from Business Intelligence to also encompass Acute Contracting, but I was quite hesitant. I was happy with my BI role, and was also acutely aware that I had 3 young children to juggle alongside my career! I remember our then Accountable Officer (a mum herself), taking me aside and saying: ‘it’s perfectly acceptable for you to set your own schedule [to fit in around afterschool club pick-ups]’. That was the moment I stopped being apologetic for being a Mum.”

Feelings of guilt and feelings of missing out on certain parts of either professional or parental life are common and, out of all the professional women we’ve spoken to in this series, it’s an issue that unites.

“I found I was always trying to justify how I managed everything alongside being a mum, and why I choose to do so much, rather than actually celebrating that women are amazing and we can juggle motherhood and a successful career seamlessly.”

“One Meeting Can Set You Back”

Demonstrating resilience and drive across her career, Asma has worked in high pressure, technical environments while raising her four children.

Being resilient, in theory, seems sound – but applying it is another story altogether. Elements of doubt begin to creep in as you climb the career ladder. This doubt is commonly known as Imposter Syndrome and it’s something that adversely affects women.

“I think quite often with imposter syndrome, you can be having a great week or month, and you’re on top of the world. And then one meeting can set you back.”

Sitting on many senior leadership forums where she brings both digital transformation, analytical knowledge and legal expertise, Asma often feels like she has to do that little bit extra to get her voice heard – something that does nothing to help the feelings of imposter syndrome that already exist.

“I’ve made suggestions in the past that haven’t been picked up, but three weeks later, someone else makes the same suggestion and it’s a great idea. I placate myself that sometimes it’s about nudging people for the ultimate good. But on the flip side, why can’t our voices be heard from the outset?”

For those who are looking to follow the trail that Asma has blazed and secure a leadership role within the NHS, Asma has this advice:

“Dream big. Work hard. If you’re not already in Health Tech make sure you volunteer for projects and read about what’s happening in the sector. My career has been all about putting myself out there, going above and beyond, and being available for new streams of work. This can-do attitude led to me finding my niche in the NHS.”