From Cityside to Countryside: Distributing Your Tech Teams 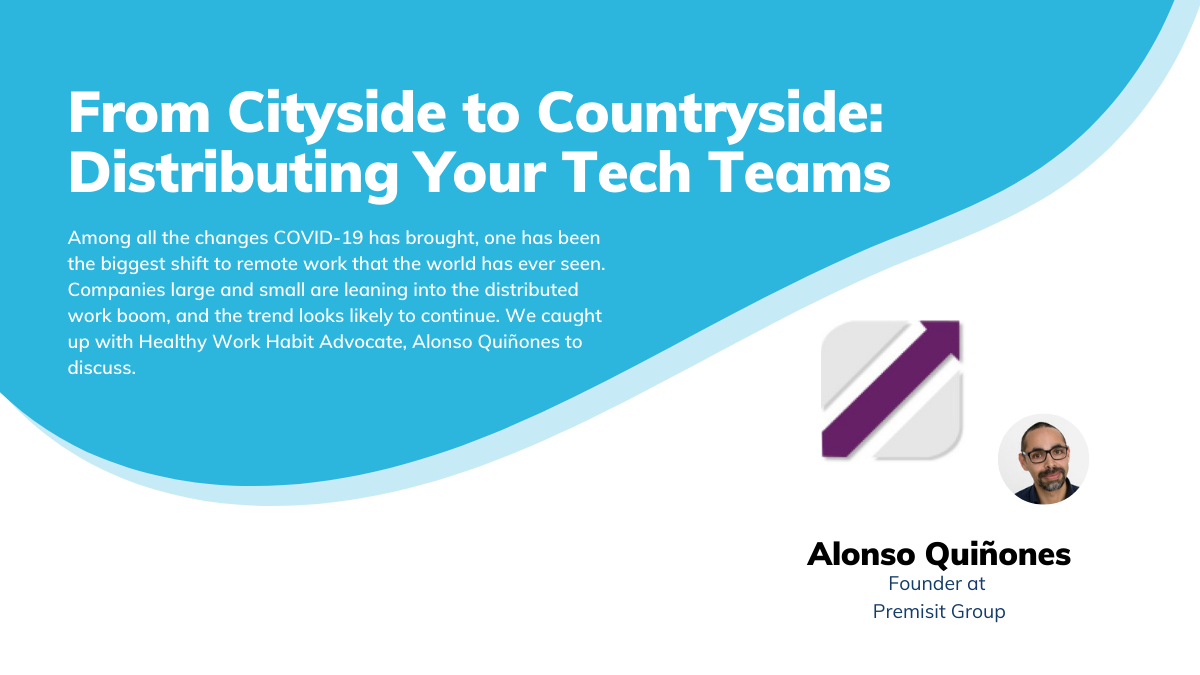 Since even before the Industrial Revolution, innovation jobs have concentrated ever more heavily in just a handful of superstar cities. Many people have long assumed that if they wanted to work in tech, they would have to live in a dense urban area where HQ was located.

Now, with COVID-19, that assumption may no longer be holding true. Among all the changes COVID-19 has brought, one has been the biggest shift to remote work that the world has ever seen. Companies large and small are leaning into the distributed work boom, and the trend looks likely to continue.

For Sweden, which has long battled a talent shortage, keeping talent available, healthy and happy has never been more important.

Leading the charge on the working renaissance in Sweden is Founder of Premisit Group and healthy-working habits advocate Alonso Quiñones.

We caught up with Alonso to discuss his ideas for the future of Swedish working habits.

The Plan is Not To Go Back to Normal

A technologist with vast experience in delivery of change and transformation projects, Alonso worked for the likes of Ericsson Telecom before deciding to start his own company which coincided with the pandemic.

“A lot of people say that you need to align for life after COVID. Our company has known nothing but COVID. We don’t have offices, we work in different cities. The plan is to not go back to normal, it’s to build something new.”

Being a team of innovators and technologists, Premisit uses the strength of system development to create high-level quality systems. Their current projects includes setting up Automated Trading Systems and building a portal for self-service of digitally filing companies yearly reports, having a Machine-to-Machine connection to the “Swedish Companies Registration Office”.

But the team’s real strength in the new world of working lies in their experience founding, running and expanding a company and team while co-located.

Experience that Alonso is keen to share with as many clients as he can.

Since the mid-1980s, more than half of the country’s 290 municipalities have seen a reduction in population, according to the Central Statistics Office (Statistiska centralbyrån, SCB).

But, opinions on the rural lifestyle are changing in Sweden.

Despite Sweden’s economy experiencing its biggest hit for at least 40 years during the peak of the Covid-19 pandemic, estate agents have reported rising demand for summer houses in 2020. Prices in June were 9% higher than a year ago, according to national Swedish broker statistics, while villas suitable for year-round living also nudged up by 2%. Separate figures from Hemnet show that between 15% to 25% more vacation homes have been sold each week over the last few months compared to the same period last year.

Outside of simply craving a break from the City life, there is also a growing movement for a more permanent relocation. And with many companies now enforcing remote working, it falls to the

Julian Stubbs, who runs a global branding agency from Stockholm and is an author and speaker on remote working, believes that will eventually lead to growing numbers of Swedes living in the countryside more permanently.

“I think there’s going to be a trend of people moving out of cities, actually moving to cheaper locations where they can afford a better life,” he says. Although this tendency is also emerging in other countries including the UK and the US, Stubbs believes it will happen at a more rapid pace in Sweden due to high levels of trust between employers and employees, an existing culture of flexible working and a tech-savvy society with strong infrastructure. “Provided you’ve got great broadband, the right kind of services, schools, all the things those new people are going to want moving out the cities, I think remote places could do rather well out of this.”

It’s here that Alonso wants to generate a conversation around relocation and distributed working so that many workers, frustrated with life in the city, can realise the opportunities available to them in a more rural setting.

“We need to answer questions that companies have around relocating and give them practical solutions. “

Having already signed a “countryside contract” with Swedish company Buddhalow and more specific the fullstack developer Alexander Forselius who lives outside of the city, Alonso is working hard to share his expertise of running distributed teams with the companies who are motivated to empower their teams to look elsewhere for talent or enable their talent to seek happiness in greener pastures.

The basic model of the financial agreement in terms of offshoring “countryside” is a calculation of reduction of living costs in the countryside, compared to living expenses in a big city.

“We can facilitate this and add our ideas to the mix. We can challenge the status quo and say: ‘okay, let’s start a movement of emptying the cities rather than over- populate them”.’”

With COVID pushing both employers and employees towards new ideas, Alonso is keen to start addressing traditional management structures that could hold the people, who decide to make the move, back.

“This is about lean leadership, macromanagement and self-driven management.”

Alonso’s idea involves throwing out the traditional hierarchical structure with bosses, middle managers and team leaders in favour of building individual one-man cells who has been empowered with leadership skills. Around that individual, you add more parts until you have a cell that can sustain itself, including facilitating for its surrounding.

Under this strategy, you’ll be empowering and investing in people you might never meet – something that many traditional companies might struggle with.  To circumvent this, Alonso suggests breaking it down and relinquishing control little by little.

“Start with dispatching work as you normally would, but take your hands off activities while empowering your individual to take ownership of that.”

Combining that with transparency around deliverables and results and Alonso believes you can start to create a team culture that will continue to grow despite the distance.

“you can have spread cells performing good in this case system development without the need of detailed control. The results will tell and be the evidence whether you’re working good as an individual or a team.”

We Can Reduce the Working Day

Just as the individual who decides to make the move to a more rural setting needs to make sure that the practical sides (like broadband) are set up to enable distributed working, the company needs to look at their processes to ensure they’re lean.

Alonso, who works in Automation on a daily basis, believes the stripping out of unnecessary tasks like admin from the day of busy professionals is key to making this strategy work.

“If you think about payroll, for example. You might have a secretary who shuffles data from one portal to the next. This is something that needs to be done but isn’t something you want people doing.”

Working primarily with machine to machine technology, Alonso and his team are building platforms that, if  combined with a flavour of mature RPA , could  be a startpoint of   replacing human beings in processes that require a lot of busy work – which is a source of anxiety for a lot of people.

The introduction of automated digital workers, could open up for reducing the 8 hours working day, without impacting the total needed workload for the companies.

“Doing this will help humans be more human by focusing less on busy tasks and more on what we’re good at: thinking and strategizing.”

The Future of The Workplace

Continuing to grow Premisit and the cell structure, Alonso is setting his sights on promoting healthy working structures through automation, empowerment and leaving the cities.

Although being one of the leading voices in this area, Alonso admits he doesn’t have all the answers and cannot solve all needed topics to evolve the ideas, but he can plant some seeds and hope that you will join the journey of transformation.

“When i’m 90 years old, I would like to look back and see that I contributed to the society we have.”