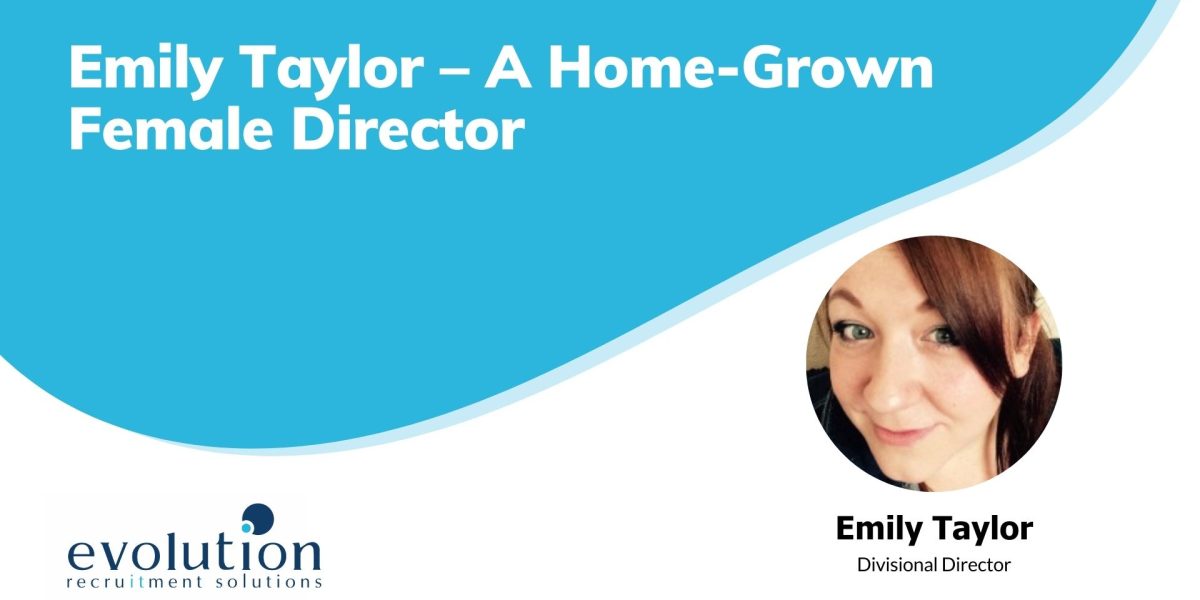 From Trainee Recruiter to Divisional Director, Emily Taylor has worked her way up the Evolution career ladder to achieve incredible success. Here’s her story.

Emily studied Criminology and Politics at University and, although she found it interesting, knew by the end of her course that she didn’t want a career in that field. Instead, she undertook a Master’s degree in Human Resource Management and Business, during which she did a placement course with the NHS. Although the HR policy work she was doing wasn’t quite her cup of tea, it was here that she found inspiration for her recruitment career.

“Right next to my desk was a recruiting team with the NHS and that seemed upbeat and energetic. I was interested in the pace of the environment, so when I finished my master’s degree, I decided not to go down the HR route, and instead I ended up picking up my first position in recruitment.”

After gaining some experience in her first recruitment job, which – although having a good atmosphere and giving her a general overview of recruitment – didn’t have much scope for progression, Emily sent out the feelers for her next step. She put her CV on CW Jobs and got a phone call from Evolution’s CEO, Gareth Morris, who invited her in for an interview. They clicked immediately and Emily was drawn into the vision and direction of Evolution, and she joined on 11th October 2010.

The early days of working at Evolution were high energy, in a fast growing and dynamic team. Emily was able to qualify in record time, and set herself up as one to watch.

With a few years of experience under her belt, Emily began to carve out her patch focusing on Microsoft SQL Server and BI. She worked hard to build this out from scratch and, following plenty of successes thanks to her hard work, began to build a team around her – starting the journey into management which has now seen her become a Divisional Director.

The Power of Ambition

Emily’s motivation to succeed has come from a number of things. As well as the usual drivers of providing for family and earning more money, Emily has a desire to always be looking for that next step.

“From my own personal perspective, there’s never enough. It’s that abundance mentality where it’s like we’ve done that well, what’s next?”

As a woman in recruitment, particularly in the early days, Emily has had to overcome numerous hurdles to achieve the level of success she has. Juggling motherhood and a demanding career is partially challenging, and when Emily was pregnant after several years in the business – and experiencing some frightening complications with that pregnancy – she was worried about how it would be received.

“I didn’t know what to do. I called an emergency meeting with the management team. Gareth and Nick put their arms around me, and it was just instantaneously better. They said, don’t worry about anything, we’ve got your back 100%, don’t worry about time off, you’re far more important to us. That’s all I needed to hear.”

With this support behind her, Emily was able to navigate both motherhood and a successful career. She returned part-time after her second baby and worked her way up to team lead. She faced new challenges when returning from maternity for her third baby years later.

“COVID had hit. I was ready to come back but there had been a lot of changes internally whilst I was away. It seemed the team was struggling and I was ready to put my stamp on it again.”

Emily could see that big changes were needed within the team, and spent several months redefining and reformulating the foundations of the team to improve their performance and to give the whole team more focus – which was greatly needed and has put the team on the path to success.

Emily is extremely talented and experienced in recruitment, but leadership is a different role entirely and it is something that she has worked very hard on over the years to develop. Her style has always been hands-on, working with her team members to get the best out of them.

“I’m in the trenches with you. We’re doing it together. Some of my responsibilities are not the same as everyone else, I’ve got all the responsibilities in terms of management responsibilities. But actually, putting money on the board – I like to be seen to be doing that as I transition into my Director role. I think it’s important, and it makes me more relatable, but also it keeps my tools sharp.”

It is her investment into her team that has led Emily to the level of success she enjoys today.

“I’m not selfish or egotistical. I don’t need to be the figurehead or star player. For me, we’re achieving success together.”

As is natural for Emily, she is not stopping with Divisional Director. Her next goal is Senior Director, followed by Managing Director, helping to influence and shape the company.

“I’m still very driven to carry on doing what I’m doing, helping the division grow from strength to strength. But moving into this role, I am very passionate to find out more about the vision of the business, how they want to grow and then seek to understand how I can best contribute and serve in my new role as a director. I see it as a great opportunity to finally realise my true potential.”

For those hoping to follow in Emily’s footsteps, her advice is clear – go for it!

“Don’t doubt your own abilities, It’s 100% achievable. You need to believe in yourself and don’t underestimate yourself. Make sure you stay energetic, driven & ambitious every single day. Keep it fun and just go for it!”