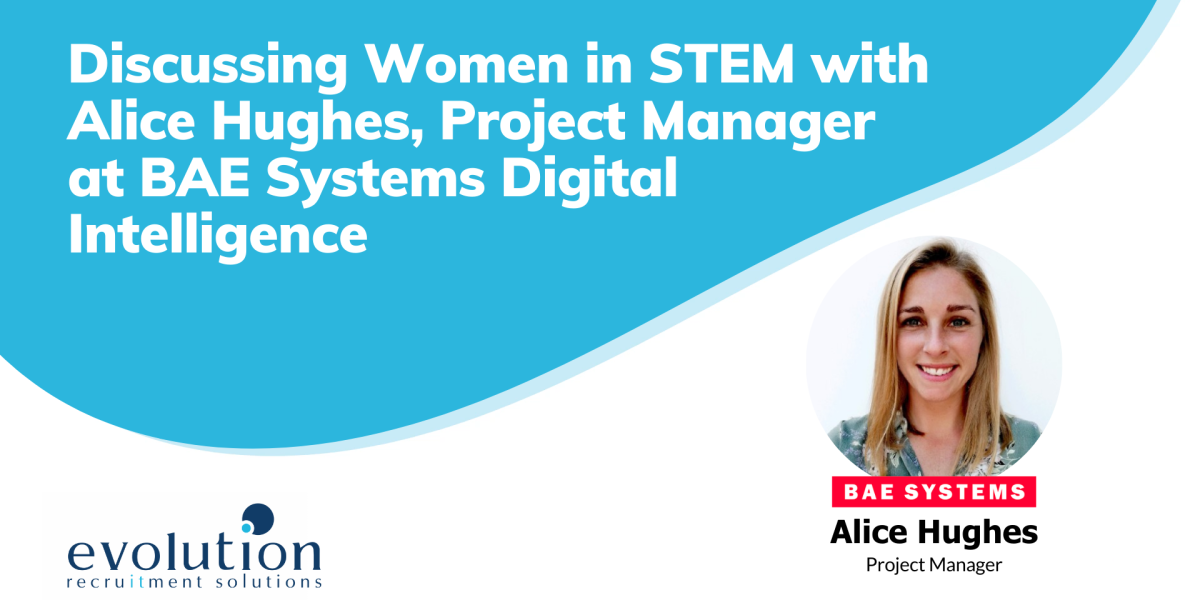 Alice Hughes, Project Manager at BAE Systems Digital Intelligence, began her working life in operations management in renewable energy, living in Cornwall. Following a move to Bristol, she transferred to the defence sector – an action that kickstarted her career.

“I really enjoyed the diversity of project management. Nothing’s the same day to day, I could work on a variety of different projects, some that could be as short as three months, some as long as three years. That really, really interested me.”

Alice is now working in the digital data space, an ever-changing and fast-paced environment that she finds fascinating.

Attracting the Next Generation of Tech Talent

As a woman working in a male-dominated industry, Alice experienced discrimination and sexist remarks in the early days of her career. Looking back and seeing how inappropriate and unacceptable some of the behaviour was, Alice is now extremely passionate about not just supporting women who are already in the industry, but also encouraging young women to join these industries and reset the balance.

Although it has been curtailed due to the pandemic, Alice is heavily involved in STEM days in schools with a focus on showing what an engineering career might look like, the types of projects that might be worked on and how interdisciplinary it is.

A big and necessary part of this work is challenging the stereotypes that face young people as they make these important decisions. Parents and schools both uphold these stereotypes by encouraging boys into technical subjects and girls into nurturing, caring subjects.

“It shouldn’t be a case of a child goes to nursery and the little girls are put with the dollies, and the little boys are put with a car. Instead you should put them all in the same play area, and they play with whatever they want to play with. Unfortunately, we can just be quite bad at stereotyping and pushing our kids to walk towards that.”

Imposter syndrome can affect anyone, but predominantly impacts women. Alice experienced imposter syndrome herself during her mid-20s, working in an engineering company which was very male dominated. Often the only woman in the room, she struggled with confidence.

“I’m quite a competent person, a chatty person, but then in that scenario, I could just become a massive introvert and I almost wouldn’t recognise that person. That point in my career was incredibly challenging. You start to doubt your capabilities.”

Struggling with imposter syndrome is extremely difficult and Alice has the following advice for those who are trying to overcome it.

“A lot of it is negative self-talk. We’re all very guilty of that. Sometimes you do have to take a step back and just be don’t be so harsh on yourself. You need to separate that emotion from the fact. You need to develop that internal script where you say, ‘I can do this, like, I am doing this, and I am achieving, and I am doing really well.’ Actually stating those facts about what you are doing, rather than just being really nasty to yourself. That’s probably the biggest thing I would do.”

Although things are slowly changing with initiatives such as shared parental leave, the majority of childcare still falls to the woman in most partnerships. Taking significant time out from a career to have children can be a detriment to women who then miss out on opportunities. Alice recognises the inequality that this brings.

“I’ve always been that person who’s had a bit of a life plan, I thought, when I’m this age, I’ll have my career sorted. And then it’ll be fine for me to go away and have a baby, because I can come back in at that level. But why should I be the one that has to plan for that? Why can’t my partner plan for that?”

For women who are following her into STEM industries, Alice’s biggest advice is to support one another.

Aside from this, she highlights the importance of staying true to yourself and making the most of the qualities that you have.

“I do think that women are more nurturing, and do naturally have better soft skills. Use that as your superpower. If you can portray that in a really positive light, people are going to want to work with you. They’re going to want to be around you.”