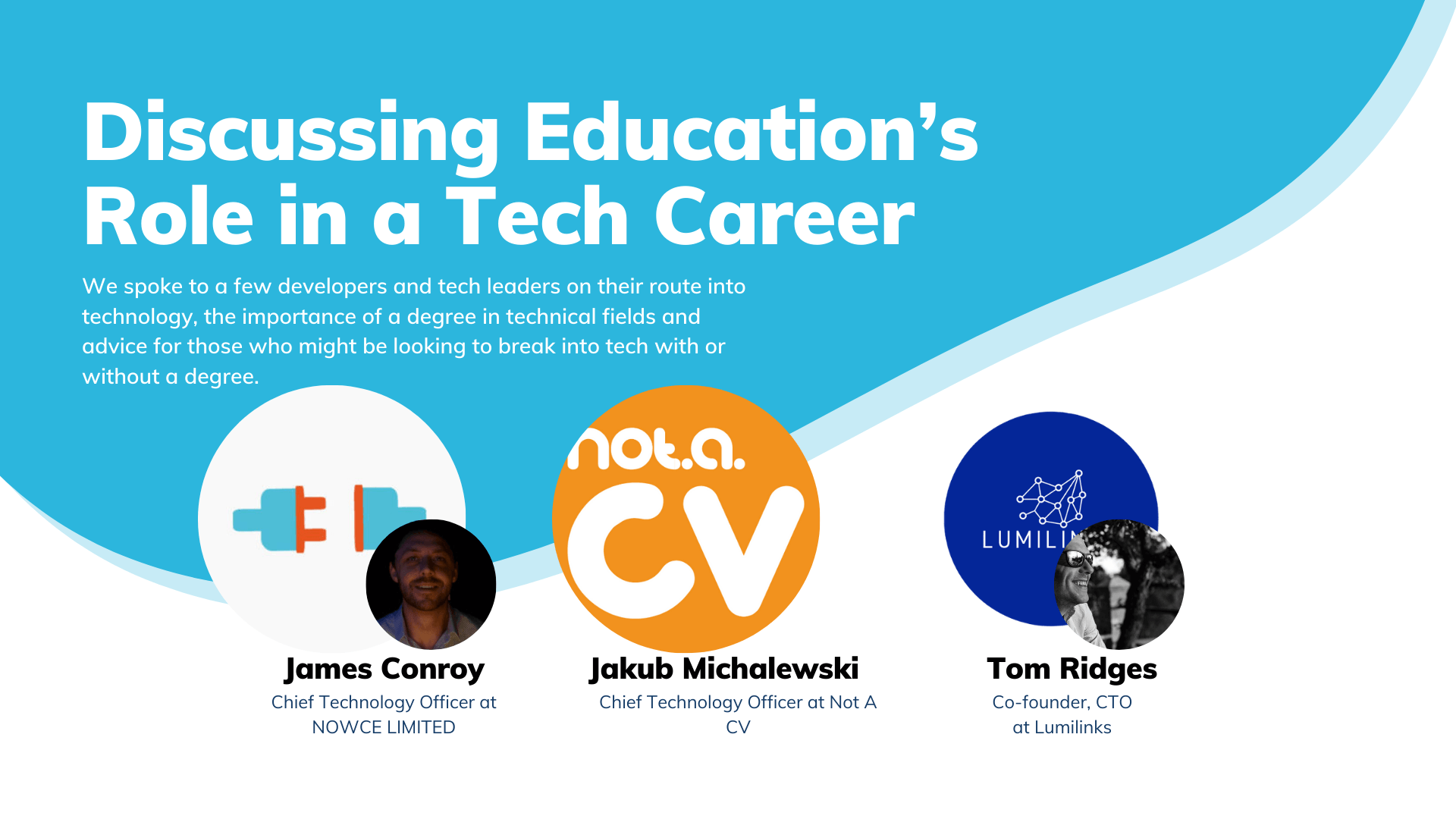 For a long time, degrees have been a hallmark of a candidate's commitment to a field and their excellence in that subject. In tech, it’s no different, with many job specs still listing a degree as a requirement for consideration.

But according to the HackerRank 2020 Developer Skills Report, the dial is moving on education and tech. Their report, which featured over 116,000 developers from 162 countries, revealed that a third of hiring managers have hired a developer who has learned their skills purely from Bootcamp software and other sites like YouTube.

We spoke to a few developers and tech leaders on their route into technology, the importance of a degree in technical fields and advice for those who might be looking to break into tech with or without a degree.

James Conroy is the Chief Technology Officer at NOWCE Limited. Now responsible for the advancement of technology solutions at NOWCE, James looks back on the early stages of his career – which avoided formal education – with fondness.

“I was at a crossroads in my life. All of my family had gone into further education and I hadn’t. After messing around for a few years, I met someone who just happened to have a software development company. He was adamant that what I wanted to achieve could be done without further education and he offered to take me on and train me up.”

What James lacked in formal qualifications he made up for with passion for his work. Before joining the software development company that gave him his first break, James was working on a number of projects that taught he a lot about control structures, conditional statements and loops – to name just a few.

“This all derived from my interest in video games and creating mods for games like Doom and Quake. That gave me a bit of a head start.”

The idea was to take James’ existing skillset and throw him in at the deep end. Day one, he was working on production work for clients with everything he’s learned, being learned on the job while working in a professional capacity.

You Can’t Gauge Capability From a Degree

James, who has worked with developers for his entire career, has seen the full spectrum of capabilities and believes that using a degree as the benchmark for capability in a development position is ill-advised.

“As far as being able to gauge whether someone's going to be capable or not just based on whether they've got a potential degree, I think is absolutely impossible. I've taught guys that have got degrees and they’ve been useless.”

Some people will make their decision to go into studying a degree based on the fact that it may well help them in their future career and may help them dispel some nervousness around their reason for being part of a particularly difficult project. For James, however, this anxiety is something a developer will need to overcome degree or not.

“I was there, on top of this huge mountain and you feel like you could drop at any moment. But I think one of the good qualities a programmer needs to have is a little bit of hubris. So I reminded myself of that, and said, You know, people are doing this everyday all around the world, so why can’t I?”

Working with clients in the Eastern Region of the UK, which includes the city of Cambridge as a major hub, I find myself regularly coming up against difficult briefs to find highly educated professionals with minimum requirements sometimes being a redbrick education.

For James, who works out of Cambridge, there is a degree of snobbery around candidate criteria which has been exacerbated by the micro-climate in Oxbridge.

Often times, the market itself becomes a bit of a self-fullfilling prophecy. Candidates go for degrees because they know that they need a degree to be accepted to interview, then they go on to set the entry criteria itself when they come into a hiring position.

“A lot of the older guys have come from that formal education background. So you know, maybe there is a little bit of bias towards their selection as well. Having said that, I think the proof of the pudding is in the eating.”

However, the market itself is changing. As mentioned at the start of the article, there is a growing number of disrupters entering the market who can provide degree-level education from your bedroom. Similarly, at the secondary level, more emphasis is being put on to careers in technology as we hurtle our way towards a more digital future.

“My nine-year-old daughter goes to Code Camp while she's in school. So you know, that the market is changing a little bit in that it's getting more saturated at the lower end.”

Theoretically, this could lead to more opportunities at the lower end of the education scale which schemes to get kids into technology careers before university is even considered.

Don’t Have A Degree? Just Take A Leap

“If there's an opportunity, you should sell yourself. And if you can play the right game and get the right people listening and put yourself forward with the right value, I think there is an opportunity for people to just jump in with a company with no experience at all, just like I did. I think you’d be surprised how many companies would be amenable to that.”

Jakub Michalewski, Chief Technology Officer at Not A CV

Jakub Michalewski is Chief Technology Officer at Not A CV. An experienced technologist, Jakub’s degree is in Business Management. His methodology, when it comes to education and qualification, is a sound one.

“I don’t believe you need a specific qualification to become successful in your journey to becoming a good developer or being good at anything in that case. All I believe you need is a willingness to spend time learning new skills and accepting new challenges.”

In an incredibly saturated market, Jakub has performed many interviews and he has never seen a direct correlation between high levels of education and high levels of skill. This isn’t to say people with degrees aren’t good, but it certainly isn’t a guarantee of skill.

“My team are passionate about the things that they are doing. Some of them have been to University and have done the programming course, some of them haven’t. And I still see the same potential in those guys. And I employed them because they have that passion and willingness to learn.”

A thought shared by many of the professionals I talk to about this topic is the idea that the true value of university lies in the community and culture it builds around it core subjects.

“At University, you’re in a community of people who share similar knowledge or who want to work towards something similar.”

The old adage, ‘it’s not what you know, but who you know’ rings true here. University, while coming under fire for what it teaches and how it prepares students for working life, is a great place to meet people who will later go on to be not only great friends but also great professional connections.

“If you want to go to University, you're definitely going to have all the tools in your hands to make a successful career when you leave. But it's not definitive that people that completed uni will have more knowledge than the people that didn't, because it's a very personal experience.”

Just as the Unversity experience is very individual, so too is the way that people learn in general. For some, the theoretical study may be challenging. For others, getting hands-on with a product may leave them scratching their head, wondering where to start.

For Jakub, it’s a case of matching the learning styles of those on the team to provide an experience they enjoy – which, for his team, happens to be Pluralsight and Udemy.

Tom Ridges is the Co-Founder and CTO at Lumilinks. His stance on the degree’s in a tech career is that they’re not as important as people may initially make them out to be.

“I’ve run a couple of different teams within different organisations and it always comes down to attitude. Attitude usually trumps technical knowledge.”

Tom has worked with both ends of the scale; some who have studied Computer Science at Cambridge and others who have never set foot inside a University. For him, the difference can be inconsequential.

For Tom, a degree is a good indicator of a candidates base level skill and knowledge. Likewise, a few years working on different projects as a hobby will give you a good technical benchmark.

“If I look across my team, i’ve got people who’ve got degrees and people who haven't. If you were to run through one of our statistical models, you wouldn’t notice a difference in performance between anyone.”

Considering degree’s to be a bit of an archaic measure on the ability of a candidate, Tom always looks for the correct mindset – one that can think through problems and push harder to find solutions – over the right qualification criteria.

There are Disconnects Between What’s Taught and What’s Needed

Education in general comes under fire for not teaching students valuable life skills.

When it comes to advanced education, a similar logic applies with many employers believing degree level education does a poor job of preparing students for their next step: the workplace.

Taking this one step further, many argue that a curriculum will always be one step behind the working world because the process of breaking down information into a curriculum takes time – time enough for the world to move on.

“I studied network and Communications at uni. So computer network, satellite networks, you know, all those things. I left Uni and the world was already moving on. I still had the principles nailed down, but it’s almost impossible to keep up.”

Instead of university curriculums, and by extension students, would be better off focusing on topics more in line with software development in a business setting. Topics like behaviour-driven development and other skills that help a developer speak to a business and learn what they require.

For the average student, there may be better more agile alternatives to university to pick up these basic principles of development.

“You can pick up a lot of those skill on the job learning or through online courses that are out there.”