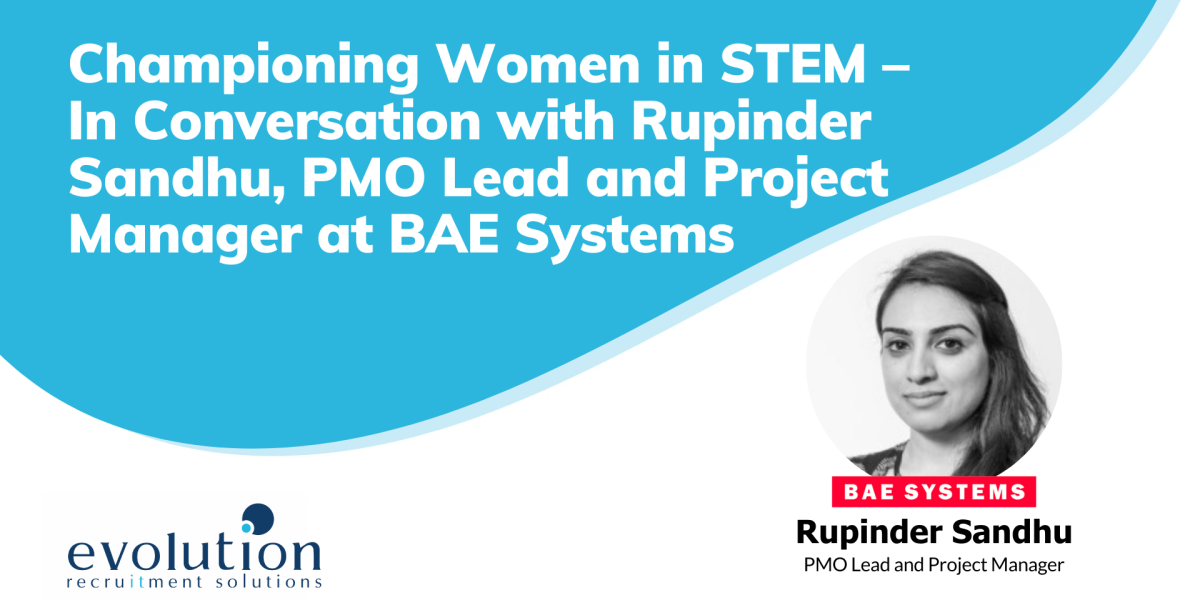 Rupinder Sandhu, PMO Lead and Project Manager at BAE Systems Digital Intelligence, has a wide-reaching role covering governance and assurance, conducting contract extensions, and setting up new projects. This can include creating project management tools, setting up billing plans, reporting, and ensuring that everything and everyone is in place to deliver the project on time.

Rupinder’s interest in technology is rooted in her father’s decision to buy the family a computer when she was very young. Ever since, she has frequently been found crouched over a keyboard, watching her ideas and thoughts flicker into life on screen.  Her interest in all things computing stayed with her throughout her studies, gravitating towards topics such as AI and data. It is the possibility of making people’s lives easier that really appealed to Rupinder – how it can help make everything more efficient.

“Ever since that experience of the first time using a computer, I have been truly fascinated with technology and its advances, especially Artificial Intelligence. Technology makes life so much easier for so many people in extraordinary ways.”

Rupinder’s career, however, didn’t begin in project management. After her degree, she began training as a secondary school IT Teacher, but soon recognised that it was not for her. This period coincided with the 2011 recession and with graduate roles hard to come by, she decided to opt for the first role she could find – a Customer Service Advisor at a Finance firm’s call centre.

Rupinder did very well within the call centre, hitting all of her targets, but she got to a point where she was bored with the role. It was at this point when she moved into an operational position at the finance firm, where she discovered her aptitude for project management. Despite the progression, Rupinder was nonetheless drawn to life at a technology firm – its fast pace and eclectic challenges. And so she joined BAE Systems as a Junior Project Manager in 2015.

When Rupinder started at BAE Systems, she was the only female on her account project. She knew that things needed to change and, when she had gained experience of how things work in the business corporate world, she raised this with her account leads. By the time Rupinder moved accounts, the ratio had improved and Rupinder was determined to continue to help improve diversity in the STEM environment.

Rupinder has been an official STEM Ambassador for six years and as part of this role she goes into schools to participate in sessions, with other professionals within STEM, to talk about the range of careers available and open students’ eyes about the importance of diversity and inclusion.

“At one school we were asked to bring in three items to help pupils guess what job I had. I took in with me my laptop and my notebook and a pound sign to show that I have an office role, manage projects that have funds assigned to them and be organised. And even with those three things in front of me, a lot of pupils guessed librarian, hairdresser or were too baffled to know what I did.”

It was this incident that inspired Rupinder to do even more to raise the profile of STEM careers for a diverse range of people, through improved engagement with the BAE Systems brand.

“If we stuck to our normal ways, we would be limiting ourselves. Throughout the years I’ve been at BAE Systems, I’ve seen more women in the leadership role than when I joined. I’ve seen a change, and it’s awesome. It’s really refreshing. It is incredibly motivating. Makes me think I can get there too.”

Rupinder is a big advocate for putting yourself forward and sharing your wins, however uncomfortable that might feel. She went through a phase where she was struggling on a particular project and her confidence dipped. At this point, she knew she needed to make a change, so she put herself forward for the Tech Women 100 Award.

“I was awarded one of the 100, which was phenomenal. I needed that for my self-esteem. There are initiatives out there that are helping women that are at various stages of their career. It’s literally just what I needed to boost my confidence.”

For those women who want to follow Rupinder’s footsteps into a career in tech, she has the following advice:

“If there isn’t one there, create it and make the movement happen. You will be so surprised how many people will join. Also, you will have that under your remit – not only is it something that you’re passionate about, but it’s also something that you took the courage and initiative to setup.”

Additionally, on occasions where you do not feel listened to or have your ideas dismissed, Rupinder promotes raising awareness and building the courage and motivation to communicate this.

“Make it clear that that it was originally your idea, but it was dismissed. You just need to be mindful on your approach, but unless that awareness is raised, nine times out of 10 that male colleague does not realise they have done that. You will have support and backing from other females, we are there. The support is there.”