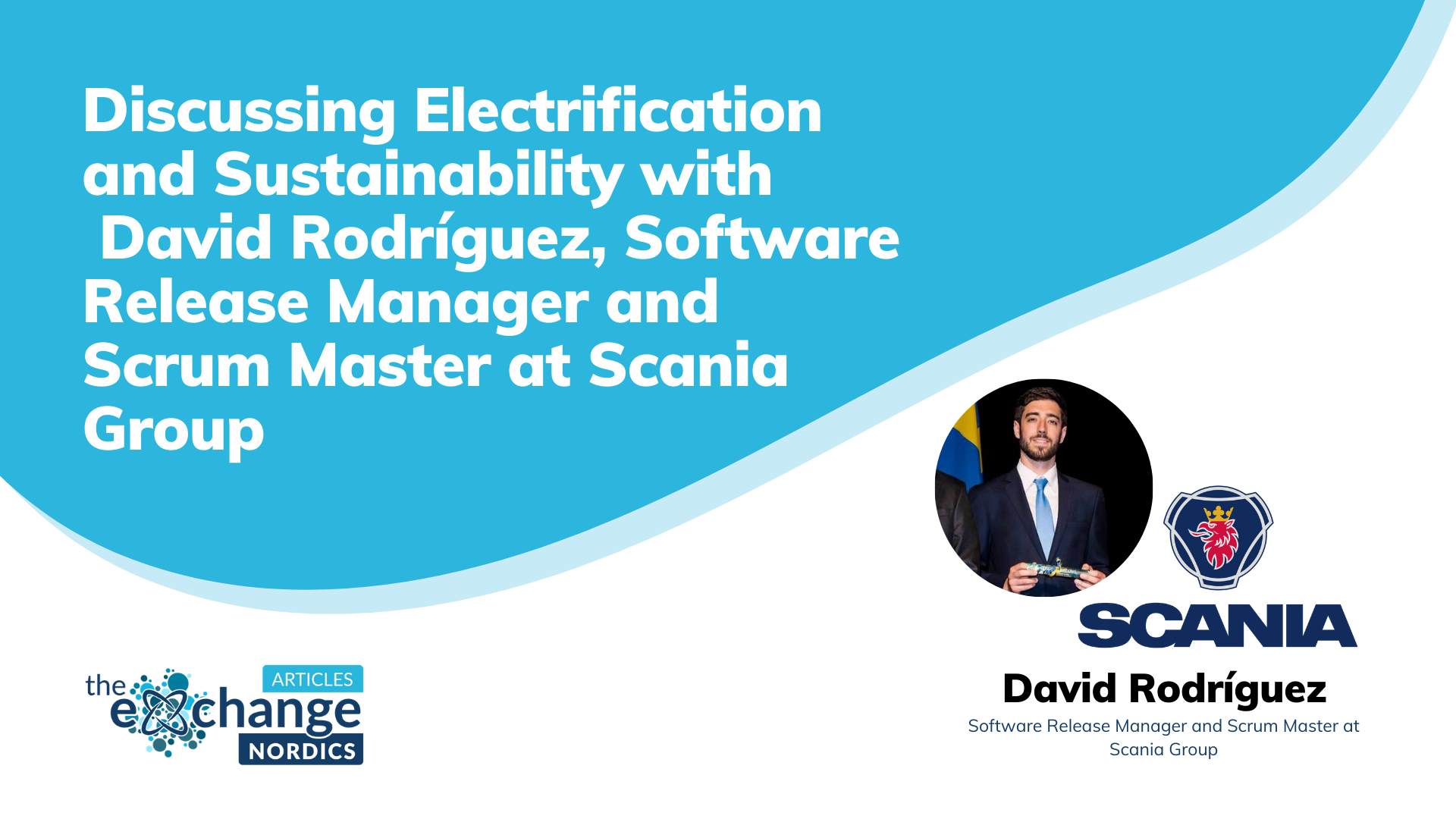 As the climate crisis continues, more and more companies are turning to electrification as a means to reduce emissions, embrace alternative energy and increase efficiency. In conjunction with government and global initiatives, the transport industry has seen a significant move towards renewable solutions – with electrification leading the charge.

To get a lay of the land, and hear about both the opportunities and challenges in the realm of electrification, we spoke to sustainability advocate and Software Release Manager at Scania Group, David Rodríguez.

With a masters in Sustainability Engineering and Management, David joined Scania after a two-year programme inside an Industrial Engineering School where he focused on studying sustainability in the bigger picture.

“So, when I buy a cell phone… how much pollution will it actually contribute? Do you account for the emissions of the factory building it? The ship that brings it to my country? The truck that takes it to my local store? We were taking this entire lifecycle into consideration when it came to Engineering.”

David started his career with Scania as an On Board Diagnostics Certification Engineer. Int his role, David worked on what he called the ‘brain of the engine’ and helped developed a system that measured the performance of combustion engines – taking a special consideration towards the emissions of that engine.

“This is a legal requirement in Europe. If you want to sell a truck in Europe, you need to show that you are actively fulfilling the Euro Six License. Around the world, there are different standards – it was my responsibility to work with the certification of this software to develop the ‘brain of the engine’.”

David’s work here actively contributed to the monitoring of emissions and then the reduction of pollution in cities.

David has since moved on from that role and now works with the Battery Management Unit. Here he works on a team that creates systems for Truck and Bus batteries that control everything from the setting of the battery charge to the temperature. His main responsibility is communicating with external and internal stakeholder as release and iteration manager.

If we were to take one certainty from COVID-19, it’s that everyone has had to adapt, change and break certain habits they thought were unshakeable.

Pandemics, or events that cause significant disruption, have traditionally had a transformative power on societal norms. The Spanish Flu Pandemic of 1918 marked a turning point in the fight against the use of spittoons and the near end of chewing tobacco.

Skip forward to 2020 and we’re seeing change in a different way as more and more of the workforce question the safety and validity of large office spaces and busy commuter transport after enjoying the benefits of remote working – both on their professional lives and on the environment.

The benefits many found heartening early on—from cleaner air to birdsong newly audible as cars and planes went quiet—were always likely to be temporary as economical demands pushed us back into old habits. The benefits of home working, combined with the obvious environmental benefits, have left a lasting impression on consumers deciding on their next car.

A What Car? survey of 6632 new car buyers revealed that nearly 19% have changed the brands they were considering pre-lockdown, and 25% will be moving to a smaller car. Notably, around one in 12 buyers have said they are looking to buy a pure EV as a result of the lockdown, with one in seven likely to opt for a hybrid.

Although just one survey, it does demonstrate the change in sentiment for car buyers. With that in mind, attention turns to manufacturers and developers – people like David.

For David, who is fully immersed in the both the mechanical and logistical development of electrification, it’s not as simple as flicking the switch over the electric when the engines are powerful enough.

“When you have a petrol car, you know that if you fill up you’ll be getting some many miles. So you can just plan around that. That’s it. If I was to get an electric car, there’s more to it. I need to plug it in and charge it. I need a charger at home, at work and on the road.”

Logistics, as far as David is concerned, is the single biggest roadblock to the electrification of our transportation. This issue of logistics doesn’t just stop with the car owner, it goes much higher.

“If every commuter in a city got an electric car and started to charge it in the morning an hour before work, the strain on the grid would be massive. We’re talking about an entire restructuring on how we get and use our power.”

To achieve the electrification dream, it requires more than just a powerful battery. It needs new infrastructure, new legislation and new conversations.

Scania is Listening, But Everyone Else Needs to Talk

Scania and David’s team are at the forefront of carbon neutral engine design. They, as a team, are contributing to tackling the carbon crisis by continually developing new alternatives while also reducing the impact of current engines.

David, who works at the forefront of this development, is an advocate for increased collaboration in the field of electrification.

“There’s a lot of work to be done with other companies or governments. Scania has to be open and listen to all the other players in this game so we can all design in the same way and build the right infrastructure into these cities.”

Collaboration within the auto industry is a rare thing. As a rule, the big car companies don’t really like to share toys and work together. It’s not in their nature. This stance was highlighted by the incredulity that met Elon Musk’s move, in 2014, when he announced that Tesla’s patents would be free for anyone and any company to use.

But, in 2019, there was a surge of collaborative projects that gave the industry hope of a unified future in electrification.

In January 2019, VW and Ford announced an “alliance” to work on an undefined number of new vehicles and projects.

In May 2019, Fiat Chrysler proposed a £28.3 billion merger with Renault that would create the world’s third-largest carmaker, behind Toyota and Volkswagen, saving billions with the view to funnelling that cash into the race to compete in electric and autonomous vehicles.

BMW and JLR were the latest to announce they will work together to develop electric vehicle technology, hoping to increase the pace of innovation at both companies while at the same time spreading costs.

These collaborations are positive and are a step towards the combined design principles that will make electric cars affordable, widely available and easily supplied for. But the manufacturers themselves are, infact, just a small piece in the wider Electrification puzzle and can only do so much.

The Solutions Lie in Infrastructure

As mentioned above, electric cars are only as good as the infrastructure that is in place to support them.

For David, who is a Spanish national who works in Sweden, he sees the both the best side and the worst side of the electrification coin.

“The Nordic countries have a great infrastructure for charging their vehicles. But when I go back to Spain, you don’t see a single vehicle or charging point.”

In Sweden, there are over 10,000 electric car and hybrid car charging points as of Q3 2020. In addition to this, the Swedish government has presented economic incentives for installing charging stations as well as earmarked resources to secure the public charging network in the country.

These incentives should contribute to the continued growth of electric charging points which are integral to the uptake of electric cars and the reduction of our carbon footprint.

Without these incentives, however, electrification will continue to struggle to gain traction – as evidenced by Spain’s slow roll out of a new initiative between the European Investment Bank and Spanish Utility Endesa that should see the roll out of 8,500 charging points for hybrid or electric vehicles.

“You’re not going to buy an electric car if you don’t have points to charge it. So if you have one in your neighbourhood you’re going to do it – it’s as simple as that.”

With collaborations happening right now, and more governments starting to clamp down on emissions, it is surely only a matter of time before they all come together.

When that happens, David and his team will be at the forefront of the change.