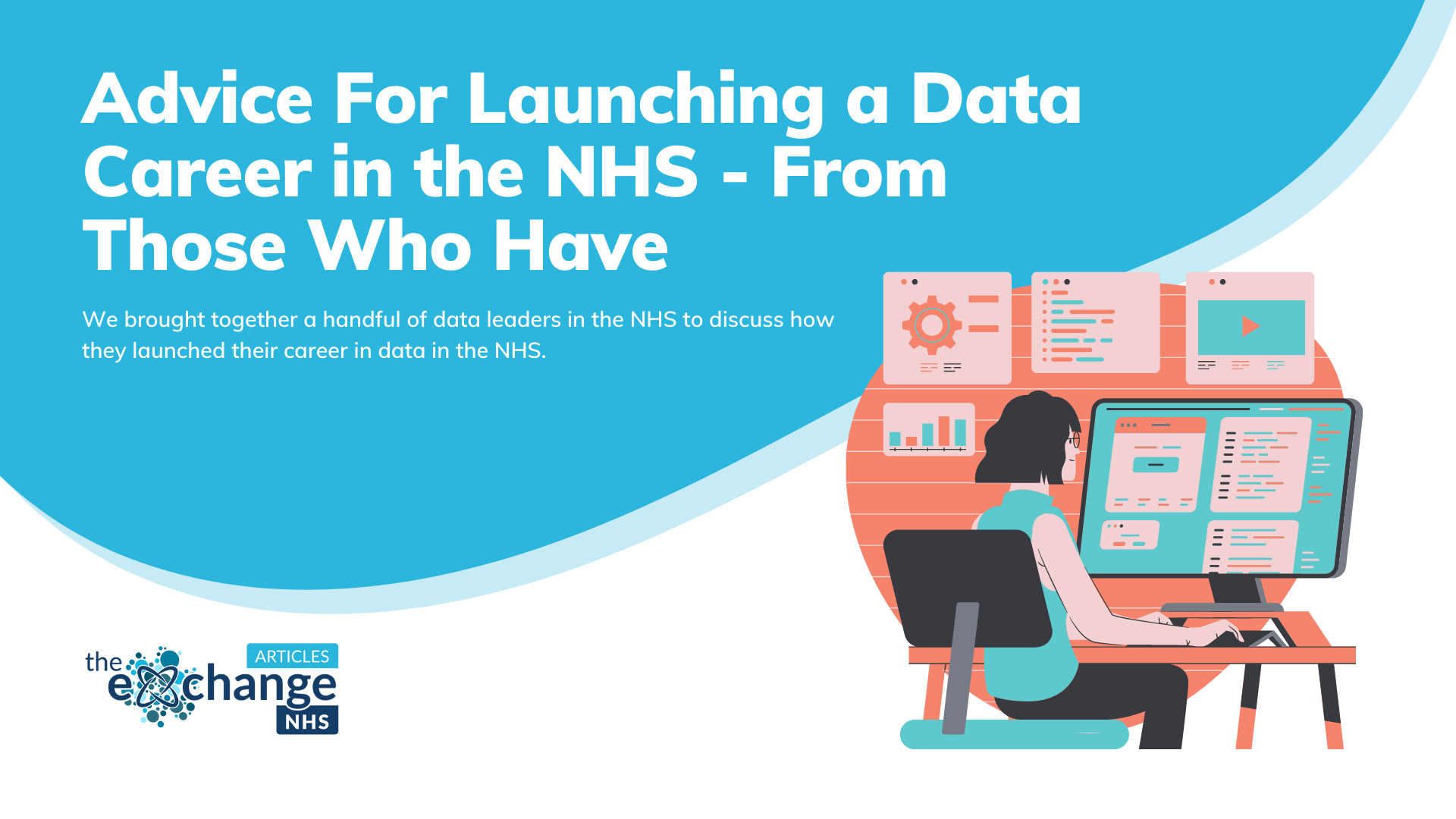 Over the past five years, the NHS has undergone a dramatic digital transformation. Spurred, in part, by the emergence of COVID-19, the innovations we are seeing today in the form of remote consultations, public access dashboards and apps have been many years in the making.

Running below the glossy surface of many of those innovations is the all-important data that forms the foundation. As the appetite for transformation scales, so too does the need for more and better structured data.

Both outside and inside of the NHS, data and the study of data is growing in reputation. More and more individuals are looking to a career in data as a progressive and interesting career route.

We wanted to bring together a few of the NHS’ top data talent to discuss what it takes to make it as a data leader in the NHS.

Leaving university with a degree in Biomedical Engineering, Zain struggled to find a role in that field. Working a number of volunteering roles, Zain found permanent work as a teaching assistant in a secondary school. Although Zain learned a lot from his time at the School, it ultimately wasn’t where his passion lied. When Zain’s friend introduced him to Data Analyst contracting opportunities within the NHS, Zain was keen to do what he could to put himself in the running for a position.

“I spent about two months learning advanced excel and SQL too.”

Putting himself forward for permanent and contract Data Analyst roles in the NHS, Zain was accepted and started his first role in the NHS as a Cancer Data Analyst at Watford Hospital. This triggered a long line of contracting jobs and with every one, Zain gained more and more experience about Data and the NHS.

Over three years, Zain jumped from Hospital to Hospital before deciding to go for a permanent position and found one in the form of a Business Intelligence Manager at NHS England. Climbing the ladder over a three year period, Zain moved into a Deputy Head of BI role and, when COVID hit, was taking on a lot of the Head of BI responsibilities. Safe in the knowledge that he could deliver at that level, Zain applied for the Head of BI role at Barts where he remains to this day.

The Beautiful Thing About Data Is Anyone Can Learn It

Working with data requires an analytical mind – that much is for sure. What we were keen to understand from Zain is how necessary a degree is to a career in data.

For Zain, who himself has a degree but wasn’t directly relevant when he was looking for data positions, a degree isn’t needed.

“An academic degree helps but I think the beautiful thing about data is that anyone can learn it at any time. I learned it from YouTube, for example.”

Often there is a certain qualification that a prospective data professional can aim for. This is a binary, pass or fail indication to an employer that that candidate has the competencies for the role. Aiming for one of these qualifications will, at the very least, get your foot in the door.

I don’t care how you learn to code, whether it is through university, or through a YouTube channel or through your friend, it doesn’t matter. I think the field of data is extremely versatile in that fashion.

On balance, University isn’t just about attaining qualifications, it’s about meeting people, pushing yourself and experiencing things. This is what professionals like Zain truly value from their degrees and it’s what they consider when reading a potential candidate’s CV.

“You are opening doors to so many different people from so many kinds of backgrounds, which helps cultivate diversity of thought.”

Be Proactive in Your Learning

For Zain, who does lots of coding outside of his job to keep his skills sharp, he believes it’s key that data professionals stay on top of their skillset and be proactive in their learning.

“I see this complaint a lot – people see that a job has a certain language criteria. It happened to me, but you just have to go and learn it. It’s just about being proactive in your learning.”

Zain also believes he has benefitted a lot from his time contracting, where he would be moving around to different teams and Trusts often. Never moving for moving’s sake, Zain always had a goal in mind and chased it relentlessly.

“It is important to keep the momentum up and to not get bogged down in one job because I have seen situations where people with excellent technical skills, are not able to flourish and become too afraid to move because data moves so quickly.”

After finishing his MBA, Sampath was offered a role at BHR where he has stayed ever since. Starting as a band 5, Sampath has worked his way up and through the NHS quickly. Having stayed at the same Trust for his entire career, Sampath has seen BHR go from basic technology to advanced technology now with advanced capturing and reporting tools.

“Before we used to do it on the Excel now, we produce it on the clixsense. We use Power BI wherever available and now, going forward, we’ve been looking into moving to N365 cloud-based technology.”

Now at the very tip of the spear when it comes to data in the NHS, Sampath is enjoying life at the NHS which has given him a career of progression and ever-rewarding challenges.

“I had managers, who gave me all the freedom to learn and implement things which is useful to all. I have had exposure to different things, different topics, different tools, technologies I’ve learned by myself. They give you support, if you want that. If you want to work alone and focus on getting things done by yourself, that’s fine too – as long as you get along and you share with the team in the hospital.”

Seek Out Opportunities and Experiences

Like Zain, Sampath believes that some of the less tangible benefits, like the people you meet and the opportunities you get access too, of going to University and getting a degree are perhaps the more important ones.

Sampath spent six years in higher education. Four years at postgraduate and two years at Masters. Speaking retrospectively, Sampath believes that perhaps this was slightly overkill and puts more weight into actually making sure his skills are always sharp and up to date.

As clearly defined routes into positions begin to fade, it becomes even more important that candidates arm themselves with as much experience as possible. Sampath, who worked two unpaid roles before joining the NHS, believes you can’t put a price on experience.

“They weren’t paying anything but for travel and it was still worth it because I was working in a work environment and I was learning how people talk, how they interact and everything else.”

But not all opportunties are made equal and Sampath believes that analysing these opportunties is key to making the most of your time.

“If somebody is giving me an opportunity to explore a technology, which is way ahead, I would love to put two hours of mine into a journey.  Spend these two hours and get that opportunity to get that exposure and you don’t know what that skill might open up for you.”

In mid-April, when much of the world was shielding from coronavirus in lockdown, Google searches for terms like ‘online courses’ and ‘free online courses’ reached a historic high.

And a survey of 2,002 U.K. adults taken during the lockdown by The Open University found 24% had taken on additional learning opportunities to “boost their employability and protect the value of their skills”.

Outside of simply gathering skills, Sampath believes taking it that one step further and actually applying them proactively is key to success.

“Put them into practice, make a proposal and pitch it. If you bring something that is great for the patients, then it’s not wasted time.”

Falling into Healthcare Informatics by accident after finishing his Law degree, Mark joined the Royal Free as a Deputy Head of Reporting and Analytics after a year stint as a Logistics expert at Tesco and six years at Hertfordshire Partnership Trust.

After 18 months at the Royal Free, Mark moved to Camden and Islington where he became Head of Information before moving to Bart’s Health. Loving his time at the NHS, Mark believes that starting his career outside the NHS has aided his time with the healthcare organisation.

“If you think back sort of 10,12 years ago, data and information were very much an afterthought in the NHS. We were kind of feeding the beast, cranking through reports, but not in a very sophisticated way. We didn’t have very professional SLAs or KPIs or anything like that. I came at it from more of a corporate point of view which gave me a more customer focused orientation.”

Putting value for the patient first, Mark was a breath of fresh air for the NHS at the time. Now, some time later, the pace of change is picking up.

“Things have changed a lot in my time in the NHS, and the way that we kind of operate and the way that data is viewed now and, and positioned, it’s a bit more front and centre. Now we do a lot less looking backwards than we used to, and don’t get me wrong, we still do a lot of looking backwards at what happened yesterday, last week, last month, last year. But we now are doing a lot more thinking proactively and thinking what’s going to happen next week, next month, next year, and even a few years down the line.”

Do you need a degree?

A degree will open a door for you, for a specific role. Often, that’s all a degree will do. After that, experiences are required. For Mark, who has a degree in law, he can’t remember the last time someone asked to see his degree certificate.

“It may have started my career, but it’s more about what I’ve done in the workplace since then. That’s not to say that going to university and having an undergraduate degree in maths or statistics is not going to be a real benefit in in doing something like what we do, or computer science. That would be enormously helpful. But I think you’ll learn an awful lot more about the role from doing it than you do from university. This is especially true given that every hospital and every NHS organisation operates slightly differently.”

Mark puts a lot of stock into NHS experience. Even a short placement will give you a good headstart on the intricacies of the NHS and prepare you better than those who have none. Regardless, there will still always be that period of learning and understanding that comes at the start of a new role.